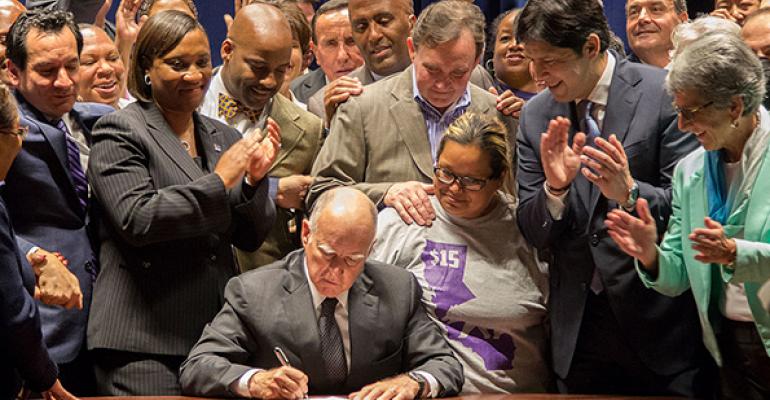 California Gov. Jerry Brown on Monday signed into law a landmark bill that phases in a $15 per hour minimum wage across the Golden State by 2022.

At a press conference in Los Angeles, Brown said raising the minimum wage may not make sense economically, “but morally and socially and politically it makes every sense because it binds the community together.”

It’s a matter of economic justice, Brown said. “And it’s about people. It’s about creating a little, tiny balance in a system that every day becomes a little more unbalanced.”

Brown noted that there’s “a lot of anger” in the presidential campaign.

“It may have many sources,” he said. “But one of the sources simply is the way the average American is treated in this economy. Today, we do something about that.”

The California Restaurant Association in a statement last week called the bill a “hastily crafted” effort that was “pushed through with no regard for the many negative consequences this measure will create. Such a dramatic wage hike will force business owners in our industry and many others to make tough choices, such as cutting hours, eliminating jobs or even closing our doors.”

Brown also gave credit to the Service Employees International Union, or SEIU, which last month struck a deal with state lawmakers on the increase after successfully qualifying a proposed minimum wage hike to the state ballot.

Without that “thrust,” Brown said, “We probably wouldn’t be here today.”

Employers with 25 or fewer workers have an extra year during each step of the phase-in to comply.

The bill also includes safety valves, known as “off ramps,” that allow the governor to pause wage hikes if negative economic or budgetary conditions emerge, such as a forecasted budget deficit or negative job growth and retail sales.

Once the wage reaches $15 per hour, increases will then be tied to inflation and could be increased up to 3.5 percent each year.

State Sen. Mark Leno, who co-sponsored the legislation, said the bill signing was a major victory for the thousands of workers that have staged protests over the past few years in the “Fight for $15” movement.

Another round of protests are expected on April 14.