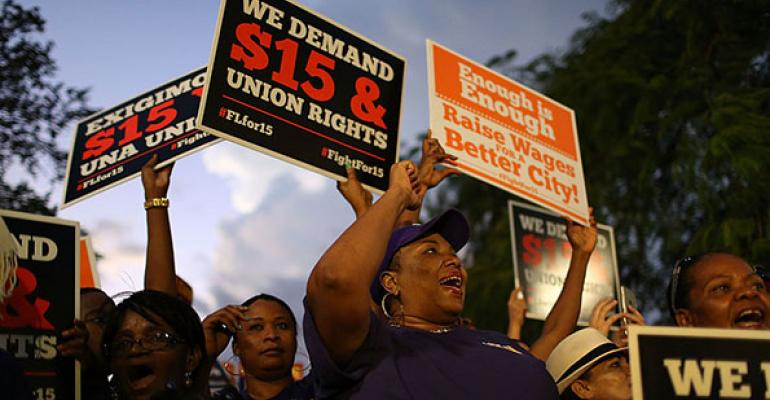 As the National Restaurant Association kicks off its annual public affairs conference in Washington, D.C., on Tuesday, labor and union activists are kicking up pressure on the industry amid a continued push to increase wages.

On Tuesday, activists released a report critical of the restaurant industry’s lobbying efforts, saying that the NRA “buys influence and votes with key members of Congress” to fight higher minimum wages and food regulations.

"Today, they are shamefully attacking small business owners who have achieved the American Dream and are giving back to their communities in countless ways."

Meanwhile, labor and union activists plan to protest the conference. And on Thursday, activists led by the Service Employees International Union promise to protest restaurants across the country in an effort to push wages to $15 and form a union.

“The National Restaurant Association exercises more influence on workers’ rights, environmental and public health policies than any other entity in Washington,” said Sriram Madhusoodanan, director of the Value [the] Meal campaign at Corporate Accountability International, an advocacy group that sponsored the lobbying report. “It shields corporations like McDonald’s from public scrutiny while it peddles those corporations’ anti-worker, anti-public-health agenda on Capitol Hill.”

Lately, however, it seems that the lobbying effort has gone against the industry.

“You’ve got to remember how quickly $15 went from the fringe of the debate to the center,” said Joe Kefauver, managing partner of public affairs firm Align Public Strategies.

He noted that President Obama called for a $10.10 minimum wage in 2014, but within a couple years the focus shifted to $15. "It's become mainstream very quickly."

The higher minimum wage in those states comes amid a wealth of other issues that are contributing to an overall environment of labor cost inflation for the restaurant industry.

New overtime regulations coming this summer could significantly increase the salary threshold at which restaurant managers and other workers could qualify as exempt from overtime pay. Healthcare costs are also a concern, as is the difficulty many employers have in finding workers in the current labor market.

The push for a higher minimum wage hasn’t pushed Congress to do something similar on a federal level, and few expect an increase of the current $7.25 rate this year — not with a government divided and an election looming.

Richard Berman, president of public affairs firm Berman and Company, said that enough states have minimum wages of $9 an hour or more that there would seemingly be plenty of votes in Congress to support such an increase.

“If you pass it in enough states, passing it at the federal level becomes easier,” Berman said.

How many states could follow California and New York, however, remains to be seen. Berman said that the two states are anomalous — they have liberal governors and cities with high wage rates already.

“I do think they’re more unique than typical,” Berman said. “There could be a little leakage, but I don’t think too much.”

Kefauver suggested that a few states could follow suit, such as Illinois, New Jersey, Connecticut and Massachusetts, but he, like Berman, doesn’t expect a mad rush of states to $15.

“The dynamics aren’t there,” Kefauver said.

Labor activists contend that a higher minimum wage is essential because more workers are having difficulty trying to raise families on those salaries.

But the restaurant industry counters that raising the minimum wage, especially to a level twice as high as the current federal rate, would force operators to hike prices and cut jobs.

Both sides are spending on the matter. According to the Corporate Accountability report, released with other labor-focused groups such as Restaurant Opportunities Centers United and Food Chain Workers Alliance, the NRA spent $34.6 million on lobbying since 1998. It also gave $1.3 million in political contributions in the 2014 election cycle.

The groups say that the association has used its lobbying strength to fight increases in the minimum wage, weaken public health laws and “keep people in the dark” about genetically modified organisms.

But union groups are also spending. Berman noted that the SEIU spent $20 million last year on its Fight for $15 campaign. The union has spent $89 million on the effort since 2012, he said.

Indeed, industry observers argue that many of the protests are designed to ultimately recruit more union members. The push for higher wages has morphed into higher wages along with the ability to unionize.

Kefauver said that pushing the minimum to $15 an hour makes restaurant workers more attractive for union organizers because they’ll be able to pay more dues.

“They’re having some success,” he said. “They’re taking the long view. They’ve been moving the ball down the field very nicely these last two years.”

Berman, for his part, is more skeptical of the protests’ ability to move the needle on the labor conversation.

“What’s the position on the day after? There isn’t any,” he said. “Most of the people are paid protesters and they don’t work for these companies. There may be some that walk out, but very few. It’s Occupy Wall Street all over again.”

But he does see a bright side to a higher minimum wage in two states.

“The only silver lining is that economists are going to be able to see what happens when you not only raise the minimum wage, but raise it dramatically, and the difficulty restaurants experience when they’re forced to accommodate wage rates not accepted by the general public,” Berman said. “But that’s a thin silver lining.”