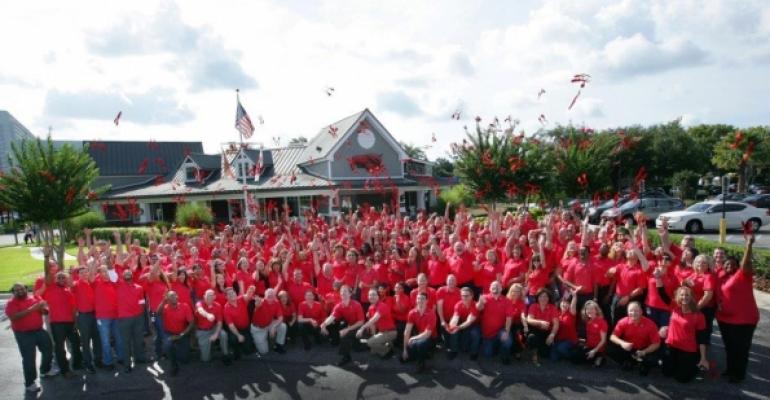 In 1968, Bill Darden opened the first Red Lobster restaurant in landlocked Lakeland, Florida, creating a new restaurant category at a time when choices were largely limited to fast food or fine dining restaurants. Since then, Red Lobster has given millions of people their first tastes of lobster, snow crab, jumbo shrimp, tilapia and calamari.

Nearly 50 years later, what was once a sole, family-owned restaurant is now the world’s largest and most recognized seafood restaurant company, with about 58,000 employees and more than 700 locations. Just two years away from its 50th anniversary, Red Lobster looks back proudly at its history and excitedly toward its future.

Over the years, Red Lobster has become a favorite destination for guests celebrating all kinds of special moments, but its success has caught the attention of more than just guests… In 1970, General Mills saw Red Lobster’s potential and acquired the company. With their backing, Red Lobster expanded across the country – growing to almost 400 restaurants by 1985, giving guests the opportunity to experience the high-quality seafood, friendly service and value from coast-to-coast. Then, in 1995, General Mills spun off its restaurant division as Darden Restaurants, under which Red Lobster operated for almost 20 years and grew to more than 700 restaurants in the U.S. and Canada. In 2014, Golden Gate Capital acquired Red Lobster and the brand began charting a new course as an independent company.

Red Lobster also has a long history of supporting high seafood sustainability standards, including being one of the founders of the Global Aquaculture Alliance, whose certification program has become one of the most influential forces in sustainably farmed seafood. Red Lobster was also one of the leaders in adopting Best Aquaculture Practice standards for shrimp, salmon, tilapia and other seafood.

Today, Red Lobster is seeing positive business momentum and is expanding to other parts of the world – including the Middle East, Latin America and Asia – as it works to fulfill its vision of making Red Lobster "Where the world goes for seafood, now and for generations.”