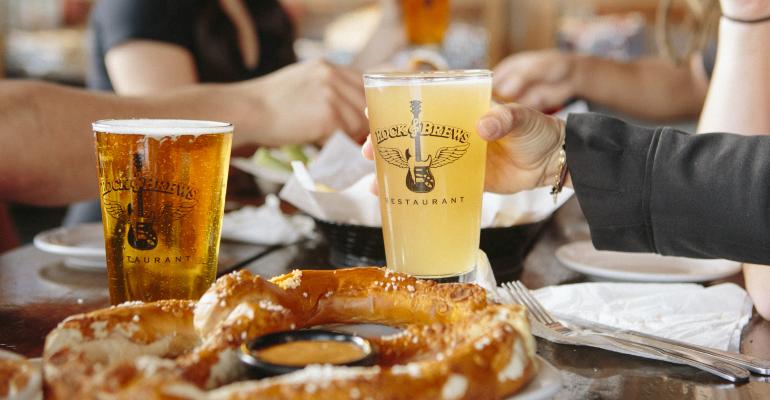 Photo courtesy of Rock & Brews
Rock & Brews is positioned to open four new locations in 2023, on top of its existing 22, and will focus on casinos as part of its footprint.
Operations>Franchising

Why Rock & Brews is positioned for growth

The casual dining chain is tapping into the pent-up demand for experiences and targeting casinos to expand its footprint.

Adam Goldberg grew up a “huge rock and roll fan” with a Kiss poster on his bedroom wall, so it’s a bit poetic that he is now the CEO of Rock & Brews, a casual dining chain founded in 2012 by Kiss' flashy front men Paul Stanley and Gene Simmons, among others.

Goldberg, a restaurant veteran who co-founded Fresh Brothers Pizza, took the helm four years ago. He just so happened to live down the street from the Rock & Brews headquarters in California and knew the founding partners well – including Michael Zislis and Dave and Dell Furano – through community outreach efforts both of their restaurant brands facilitated. When Rock & Brews hit some stumbles, including a franchisee’s bankruptcy, the partners asked Goldberg to look at the books and he’s been running the company ever since.

It wasn’t necessarily a plan he anticipated. But there’s some serendipity at play he couldn’t ignore – the rock and roll, the location, the familiar faces, the restaurant industry.

“To be able to work with a brand with such great fire power behind it has been super exciting,” Goldberg said during a recent interview.

That fire power entails more than just Stanley and Simmons, “two great guys who are so supportive,” according to Goldberg. Because of the nature of Rock & Brews, the concept is able to pull in partnerships with musicians like Jon Bon Jovi for a rosé wine promotion, and Alice Cooper for a hot sauce collaboration. Of course, the concept’s DNA starts with Stanley and Simmons and they’re on deck to create a new Kiss Cold Gin drink in 2023 – one of several partnerships in the works for the new year.

Tapping into such fire power is just one trick up Goldberg’s sleeve to accelerate the brand’s growth now that the system is financially healthy again.

“The time is right for us to focus on growth. People want to get out. They want experiences and they’re being very wise about where they spend their dollars,” Goldberg said. “We have outstanding food at a very fair price with a very exciting experience. This is comfortable environment where the parents are grooving to classic rock and the kids are entertained by the videos and the family dog can come, too.”

The National Restaurant Association's "What's Hot Culinary Forecast" for 2023 reiterates this demand for experiences. About 70% of consumers expressed a desire to gather on-premise despite the continued popularity of to-go and delivery meals in recent years.

Aside from the menu and “rocktail” list, those aforementioned videos are a focal point of Rock & Brews entertainment-centric ethos. In addition to playing classic rock throughout the restaurants, the brand is also starting to include more sporting events and has upgraded its audio and visual systems to ensure multiple viewership opportunities. Adding sports has provided a “huge lift” for traffic and ticket, Goldberg said, particularly on Sundays and Mondays during the NFL season.

“We added GameSound just this season and it’s been really positive for us to have certain sections with our rock and roll experience and others with our game TVs. Our venues typically have 20 to 40 TVs, including large video walls, so it’s a perfect venue to offer people that choice,” he said.

Goldberg adds that the company’s dine-in numbers are at an all-time high. He’d like to push the gas here with additional entertainment opportunities, such as live bands to extend the dinner crowd into a late-night crowd.

Rock & Brews is also focusing on casinos as part of its overall growth strategy, not only by opening restaurants inside of existing casinos, as is the case at the Yaamava’ Resort & Casino in Highland, California, but also opening Rock & Brews-branded casinos such as the one that currently exists in Braman, Oklahoma. The potential in this space is extensive, Goldberg said, for both Rock & Brews and partner casinos. When the chain partnered with Kaw Nation for the Braman location, Goldberg said it immediately provided a lift in frequency and amounts played, for instance.

“They have to differentiate from the casinos around them and it gets people to come in more frequently and play longer. We have a major focus on casinos because there is a lot of potential there,” Goldberg said.

A new location is scheduled to open in April at the Potawatomi Hotel and Casino in Milwaukee, in fact. This will mark Rock & Brews’ initial footprint in the upper Midwest. The brand currently has 22 locations in California, Florida, Kansas, Missouri, Oklahoma and Texas, with four ready to open in 2023. Goldberg’s ultimate goal is to take the brand international.

“The rules have changed on how to operate a restaurant and we got really smart during COVID. We are more efficient, we are training our staff better and we have higher profitability. I feel like because of that, we are finally positioned to handle growth,” Goldberg said. “I want to see Rock & Brews around the world. It’s the perfect concept. Rock and roll is a universal language.”