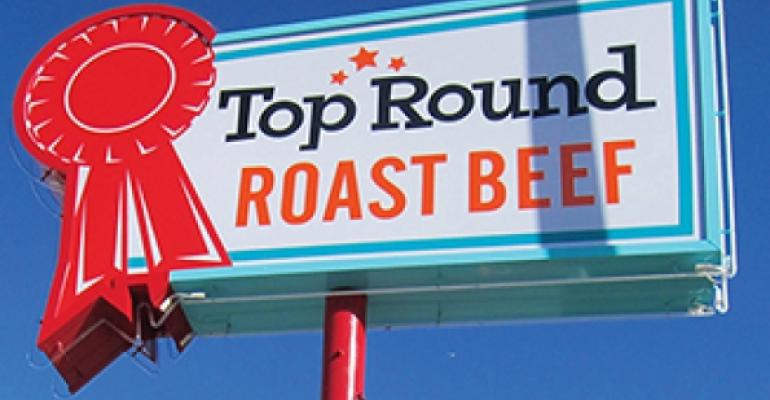 Anthony Carron, founder of 800 Degrees Neapolitan Pizzeria and co-founder of Top Round Roast Beef, is moving into the franchise world.

Initially, Carron and his partners in the upscale fast-casual 800 Degrees chain had no plans to franchise. This year, however, that has changed.

Earlier this month, seven-unit 800 Degrees struck its first international franchise deal with Tokyo-based Lumine Co. Ltd., which plans to open at least seven 800 Degrees locations in Japan over the next decade.

A second agreement was signed last week with the Landmark Group that will bring 12 restaurants to Dubai and neighboring Gulf Coast countries. In addition, domestic franchise partnerships are in the works.

Carron is also franchising his single-unit quick-service concept Top Round, which offers a simple menu of slow-roasted roast beef sandwiches, curly fries cooked in beef tallow and frozen custard “concretes.” He described Top Round as a more elevated take on Arby's.

The first franchise agreement for Top Round was revealed last week. Franchisee Ricardo Lopez plans to open at least two units in the San Jose, Calif., area, with the first restaurant to open later this year.

Top Round opened about two years ago. Why wait so long to expand?

It took us a little while to get it right. We’re just coming up on the two-year anniversary, and the first year we were still tweaking it and making incremental changes. It’s only last year that we got it right and profitable, and we decided to take a franchise approach. It’s a pretty simple, straightforward concept. It’s almost hard to mess up.

I want to do at least one more. I want to do a drive thru to prove that out. We’re looking for a drive-thru location in LA.

Right after Top Round opened, beef prices skyrocketed. Did that slow you down?

We struggled with beef prices at the beginning. We wanted to keep it fast food. At first the sandwiches were smaller, and there was less beef, and we couldn’t make the numbers work. To do a $3 sandwich, you’d have to use processed meat, and we didn’t want to do that. We ended up going more premium, with sandwiches in the $7 range.

Top Round is a return to old ways of cooking, but also a look at the future. How does it represent a shift in consumer tastes for fast food?

People want fast food, but they also want to put something better in their bodies. They don’t want to eat processed, artificial stuff. There’s a way to do that in fast food. You do a lot of volume, keep your menu simple to keep food costs down, and put it out fast.

At Top Round, we’re cooking fries in beef tallow. The beef is whole-roasted top round that cooks for 12 hours and comes out beautifully. The bun is a milk bun. We’re toasting with only clarified butter. There are no preservatives, nothing gnarly in it. It’s caloric, but it’s wholesome.

Ideally what growth do you expect for Top Round this year and beyond?

This year will be light. We might see two to five [units] toward the end of the year. We’d like to roll out 10 to 20 [units] in 2016. We don’t want to go too fast at the beginning. There will be a learning curve with any franchise experience. We want to have time to absorb those lessons and more units before we fully step on the gas.

What is the average unit volume for Top Round?

We did over $1 million in revenue for the trailing 12 months, in about 1,000 square feet. We’re looking at using more like 1,500 square feet for future units, and we’re encouraging franchisees to find drive-thru locations, which we think will add another 50 percent in revenue.

Do you envision Top Round as a national brand?

I’m calling it the better-roast-beef space. I think we’re going to do for better roast beef what Five Guys did for better burgers. There’s no one competing in the space except for Arby’s, and they have 3,000 units and more than $800 million in revenue. There’s a tremendous untapped market there to try and bite off some of what they’re doing. And we’d like to introduce a new consumer to roast beef sandwiches as fast food.

Turning to 800 Degrees, why take that concept to Japan?

We’re going to do the first store in Tokyo at the transit hub Shinjuku Station. There’s probably not a better location for any restaurant in the world. More than 3.6 million people a day go through that station — that’s the population of L.A. proper. And we’ll be right at the entrance.

What about domestic growth?

We have three more company stores to open in California and Chicago in 2015. Beyond that, we’ll continue to grow ourselves in Southern California, and we’re looking for domestic partners to grow elsewhere. But we’re looking for extremely skilled, extremely experienced multiconcept operators that can buy out a whole state or even larger chunks of territory. It’s a more challenging concept from an operational point of view, and there’s a higher investment involved, and real estate selection has to be more perfect. So it’s a very specific class of franchisee we want to work with on that one.

One of the things that differentiated 800 Degrees was that it didn’t franchise. Was the pressure too great, or was the demand too great? Or was it that you couldn’t compete unless you franchised?

Honestly, it was all three. I would wake up every morning and find five or six franchise requests, even though we’d never really said we offered it. At some point you’re saying, ‘Why are we saying no to really great people who want to help us grow the brand?’

As one of the earliest guys in [fast-casual pizza], 800 Degrees was one of the first to show it could be really profitable and work really well. I don’t want to lose that edge. I want to make sure we stay relevant in the category, even if that means growing a little faster.

What is the average unit volume for 800 Degrees?

We don’t have published franchise disclosure documents because we’re not really offering franchises for sale, and all of these deals are big enough to qualify for an exemption. But we have several stores doing more than $3 million a year in revenue, and our sweet spot is around 3,000 square feet.

That’s a point of differentiation from all the other guys. They’re in smaller spaces and we’re in larger, more marquis-type real estate. So our AUVs are way, way higher. Our dining rooms feel like full-service restaurants. We get a ton of dinner business, way more than others whose business is primarily lunch-focused.