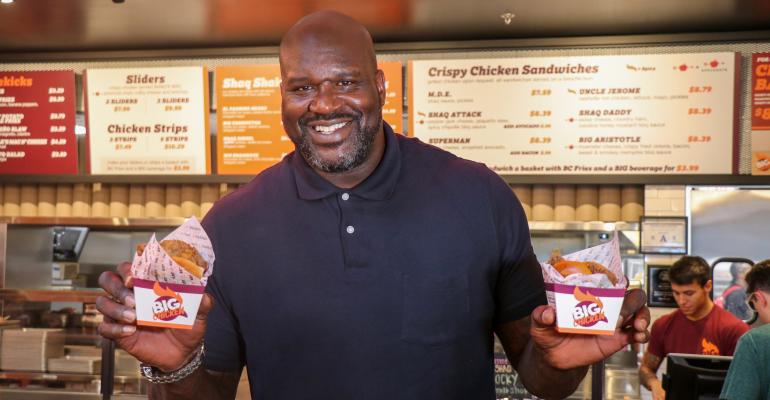 Start Slideshow ›
NBA great’s sandwich brand rolls out broadly, including virtual outlets in Walmart to outlets on cruise ships and in arenas

Big Chicken, with the creative and financial backing of Shaquille O’Neal, is starting to cast a franchise-concept shadow as long as the basketball great’s 7-foot-1 frame.

The Las Vegas, Nev.-based brand, with three stand-alone locations, has a wide range of deals, from a just-debuted Walmart presence with Canada-based Ghost Kitchen Brands to an expanding deal with Carnival Cruise ships.

And now more traditional franchising is on the serving tray.

“We’re about to expand quickly, swiftly and correctly,” said O’Neal in an interview earlier this month at the first Big Chicken location opened in 2018 in a strip mall a few blocks east of the Las Vegas strip.

Related: NRN editors discuss the California recall’s impact on restaurants and vaccinations, and the recent increase in subscription programs

The brand also has a restaurant opened in February 2020 in Glendale, Calif., and a third recently debuted on Carnival’s Mardi Gras ship. A recently announced virtual brand deal with Toronto-based Ghost Kitchen Brands for a presence with other brands at Walmarts in Canada and the United States.

Big Chicken is owned by O’Neal, as majority partner, and two other companies:

Authentic Brands (ABG), a brand development, marketing and entertainment firm that owns a portfolio of iconic brands including Sports Illustrated, Elvis Presley and Forever 21, and JRS Hospitality, an events and catering company in Las Vegas that operates such venues as Cabo Wabo, Hexx  Kitchen + Bar and Beer Park.

Chefs Matt Silverman, the “S” in JRS Hospitality, and Matthew Piekarski created the Big Chicken menu of crispy chicken sandwiches and milkshakes that incorporate many of O’Neal’s childhood favorites.

“You basically have Shaquille O'Neal with two world class culinary chefs, guys that have a stellar reputation throughout Las Vegas who worked together to create a menu that was rooted in Shaquille O’Neal's passion,” said Josh Halpern, the CEO of Big Chicken who has a background in projects like Budweiser’s Beer Park.

Halpern said the company already has plans to open restaurants in sports arenas, including the Climate Pledge Arena in Seattle, Wash., UBS Arena in New York and the Moody Center in Austin, Texas.

Big Chicken is looking for existing restaurant owner and operator groups in its new franchising push.

O’Neal himself is no stranger to franchising. He is a franchisee and on the board of Papa John’s International Inc. and has Krispy Kreme units. He once franchised Five Guys but has sold that business.

Those experiences have led O’Neal to appreciate the structure and direction provided in the franchise system, he said. Big Chicken has targeted multi-unit investors with restaurant development operating experience.

To help provide that structure, Big Chicken hired CEO Halpern, who had experience with Anheuser-Busch InBev (which developed Beer Park) and other Fortune 500 companies.

“People come to Big Chicken because they want to be attached to Shaquille O'Neal, who is one of the most popular celebrities in the world with over 20 million social media followers and what not,” Halpern said, “but they keep coming back because the quality of the food is really, really great.”

Many menu items are named after important individuals from O’Neal’s family and career. The best-selling menu item is the Uncle Jerome, named for a childhood friend, which features Nashville hot chicken, lettuce, mayonnaise and pickles for $8.79. Fries and beverage can be added for $3.99.

O’Neal was raised in New Jersey but his mother is from Dublin, Ga., and that has influenced the fried-chicken theme of the menu.

The Charles Barkley — which O’Neal said he instructed Silverman to make “big and sloppy,” as an inspiration from the former NBA-star-turned-analyst himself — features mac and cheese, crispy fried onions and roasted garlic barbecue aioli.

Halpern said he sees his role as not only developing Big Chicken but protecting founder O’Neal’s image in the culinary world.

“My No. 1 job is protecting the legacy and reputation of Shaquille O'Neal,” Halpern said. O’Neal has a 100% E-Score, a measure of a celebrity’s marketability, and he said he is intent on maintaining that.

As part of the marketing strategy, O’Neal is featured prominently in a series of videos on the Big Chicken Facebook page, showing some of the behind-the-scenes work and fun at the brand.

O’Neal said that Big Chicken is part of his dream.

“When I was growing up, mother really stressed education, having things to fall back on and following your dreams,” he said. “I always wanted to own franchises. I remember me and [fellow professional basketball player] Magic Johnson, when I was 18, said, ‘It’s OK to be famous but at some point you want to start owning businesses.’”

O’Neal said he regrets not investing early in such projects as inner-city Starbucks, a franchise that served Johnson well.

But Big Chicken’s large portions and creative menu items, like mac and cheese on a sandwich, set the brand apart, O’Neal says.

“I want to serve as the Ambassador of Fun,” he said.