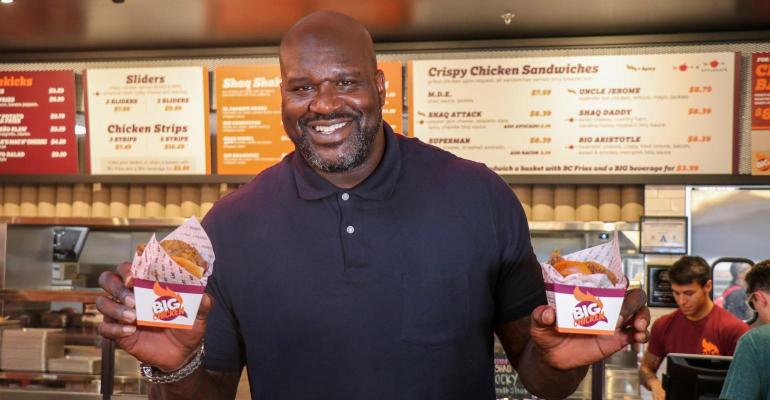 Big Chicken, the star-powered, fast casual chicken restaurant franchise founded by basketball Hall of Famer and celebrated entrepreneur Shaquille O’Neal, announced today that the brand will enter the four largest Texas markets in a BIG way. Through a multi-unit development agreement, a talented, Texas-based owner/operator team is bringing Big Chicken to Houston, Dallas, San Antonio, and Austin – four of the top 11 markets by population in the United States.

“Big Chicken is exactly the kind of brand that succeeds in Texas: pioneering and bold, yet rooted in delicious tradition. Our restaurant industry’s rich diversity is our greatest strength, and we’re absolutely thrilled that Shaquille O’Neal and the Big Chicken team are joining us,” said Emily Williams Knight Ed.D., President and CEO of Texas Restaurant Association. “Welcome back home to Texas, Shaq.”

One part of the team behind the Big Chicken Texas growth is the duo of Fazil Malik and Frank Malik. The Maliks are known for their successful gas station and convenience store operations company, Northwest Petroleum (NWP), and Skylark Construction, the highly respected construction company specializing in retail developments, gas stations, convenience stores, quick-serve and sit-down restaurants. The other partner involved in the franchise group is Noordin Jhaver, CEO of Dew Real Estate Holdings L.L.C., one of Texas’ most notable real estate ownership companies in the retail and restaurant space, and the owner/operator of more than 50 Sonic restaurants, with another 45 in development. The Maliks and Jhaver have known each other since their first roles in the convenience and restaurant industries, almost 30 years ago. Now, their first joint venture will be opening 50 Big Chicken locations in Texas.

“It’s amazing that Noordin, Fazil, and Frank have chosen their first joint venture together to be with Big Chicken. They have been incredibly impressive and successful, and after several conversations and meetings with our team, it was clear that this was a perfect fit,” said Josh Halpern, CEO of Big Chicken. “As we grow our franchise community, we are privileged that talented, multi-unit operators with this level of experience across multiple business verticals want to join our team.”

Fazil first launched NWP in 1991 and has significantly grown the company’s portfolio to operate more than 60 convenience store/gas station locations within the Shell, Phillips 66 and 7-Eleven brands. He also has franchise investments in the Burger King and Denny’s restaurant families.

Frank’s impact on NWP has been formative with oversight of all development and construction design for the company, managing more than $200 million in projects.

Jhaver started his entrepreneurial career in the convenience store and truck stop industry in 1986, and began his restaurant ownership and operations in 2002.

“Big Chicken wouldn’t be growing like it is without the team behind it,” said O’Neal. “My team has done a fantastic job making sure we’re growing in the right way, with the right people. Now, we’re going even BIGGER in Texas and I’m excited to be teammates with Fazil, Frank and Noordin.”

Shaquille O’Neal is one of the world’s most successful athlete-turned-businessmen, whose accomplishments both on and off the court have translated into a highly sought-after consumer brand. As an entrepreneur, sports analyst, DJ, restaurateur, and brand ambassador, Shaquille O’Neal’s signature “Business of Fun” mantra resonates throughout each of his countless endeavors.

The 15-time NBA All-Star’s unprecedented athletic career spanned nearly two decades and earned him countless awards and honors, including NBA Most Valuable Player, NBA Rookie of the Year, four NBA Championships and a First Ballot NBA Hall of Famer.  Currently, O’Neal is an analyst on TNT’s Emmy Award-winning “Inside the NBA.”

O'Neal, who has a PhD in Leadership and Education, established The Shaquille O’Neal Foundation which provides resources for underserved youth. He also gives back through a number of annual philanthropic programs including Shaq to School, Shaqsgiving, and Shaq a Claus.

The launch of his Las Vegas eatery Big Chicken has further elevated Shaquille’s status as he has positioned himself as a successful restaurateur. The brand currently has sites open in Las Vegas, Glendale, CA, two Carnival Cruise Ships (Mardi Gras and Radiance), Climate Pledge Arena in Seattle, UBS Arena in New York with many more locations under development.

Authentic Brands Group (ABG) is a brand development, marketing and entertainment company, which owns a portfolio of global media, entertainment and lifestyle brands. Headquartered in New York City, ABG elevates and builds the long-term value of more than 50 consumer brands and properties by partnering with best-in-class manufacturers, wholesalers and retailers. Its brands have a global retail footprint across the luxury, specialty, department store, mid-tier, mass and e-commerce channels and in more than 7,500 freestanding stores and shop-in-shops around the world.