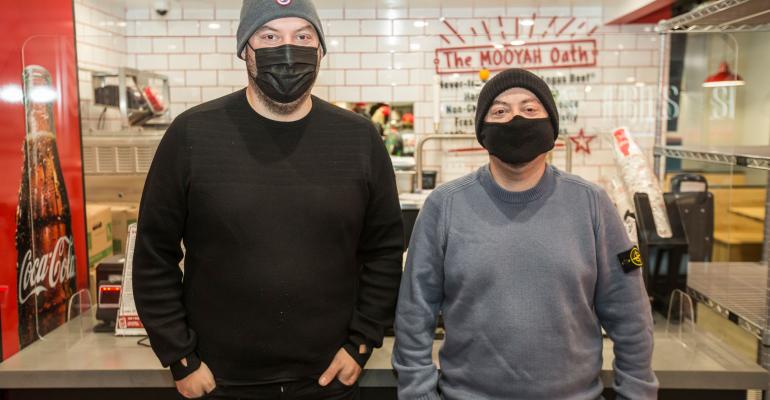 Art and Nick Depole became first-time Mooyah Burgers, Fries & Shakes franchisees in February and the road to opening day was not easy

Twin brothers Art and Nick Depole were once entrepreneurs, owning a multi-million sneaker e-commerce resale business. But in February, they became first-time franchisees with the opening of their franchise with Mooyah Burgers (80+ locations, based in Plano Texas) in New York City in February, located underneath the Moxy Hotel and just a few blocks from Times Square. The restaurant is Mooyah’s first location in New York City.

Can you tell me about your background and how you got involved with the restaurant industry?

Related: Tony Darden looks to get Mooyah Burgers, Fries and Shakes to the other side of the coronavirus pandemic

Art: We grew up in Southern California went to college at USC, and while I was there, I started my first business which was selling difficult-to-get sneakers. […] Before we worked in food, we were running a very large sneaker and clothing operation. Then around 2015 we started to see where things were getting difficult in the retail industry, so we decided to branch off and diversify into food. We originally started with another franchise that had a lot of financial problems. […] Eventually that company almost folded up and we ended up rebranding to Mooyah, so that’s how we ended up with this store. It’s been a really long ride, about two years. Coronavirus was a huge obstacle too but here we are. We just opened and we’re hoping for the best.

What made you choose Mooyah?

Nick: Once we had a situation with the other company, we started doing a lot of research and Mooyah happened to have a location close to where we live in Irvine, California. We liked the menu and the customizable applications to the menu and it just looked really good. We checked it out and went there to get dinner. We loved the food, the staff was great.

Art: The thing that pushed us in the long run was the quality of the food. In this industry it’s hard to find a company where everything is fresh. Maybe the guy down the road doesn’t make their buns in house.

Nick: That stood out to us, that the quality was great. The burgers definitely do not taste frozen, for example.

What is it like to be a first-time franchisee opening during the pandemic?

Art: It is the most challenging thing I have ever done, between all the factors of being a first-time restaurant owner and franchisee and doing it during the pandemic has been a mindboggling experience. […]  As we started construction and getting things going, COVID hit. We couldn’t do construction and we had to sit by for three months with no activity and it was incredibly scary to think of what [the New York City market] might turn into. Office capacities are down 90% and it’s just not the same New York City as it was but it’s our belief that it will come back.

Nick: It was ironic because we met with Mooyah and signed our agreement in February 2020 and two weeks later things started shutting down, so it was bad timing on our part. We were not even allowed to step foot in our space.

Originally your restaurant was supposed to open over the summer. Can you talk about the delay?

Art: We ran into a series of issues. We had a difficult, landlord-protected building to deal with. So, one of our first obstacles was even simple stuff like exterior signage took a long time to get done. We were always running behind and delayed. Initially we were supposed to open in August, but we were not ready. Then we were supposed to open in November, but we ran into issues with getting gas into the building. It was a series of events, one thing after another, that kept pushing us back. Ultimately, we were hesitant to open even now because it’s winter and the weather has been bad. We were thinking we’d wait until the spring, but at the end of the day, we just wanted to get the concept out here and start getting people in. […] I’m hoping we made a good call, even though it’s not ideal timing – we even had a blizzard on opening day! – I’m hoping people understand everything we went through to get this open.

Nick: We’ve had neighbors come in and say they’re glad we’re open, and the city could not have been more welcoming.

Art: There have not been a lot of openings during the pandemic so it’s a little hope for New Yorkers too.

What has been the biggest challenge so far?

Art: As of right now, I’d definitely say foot traffic. Going into it, it’s getting better. We’ve been here pretty much every day and we can see every day the city is coming back to life a little more, but so far the biggest challenge has bene that along with the indoor dining restrictions [which were just lifted on Feb. 14]. We’re also next door to a nightclub and we have not gotten the same kind of action we’d normally get and have had to close much earlier than we anticipated. We had been planning to be a late-night option for people coming out of nightclubs. The other thing that’s been a killer is the theaters being closed. […] I think when the theaters come back, New York will come back.

Is off-premise activity lower than you expected?

Art:  Our expectation was we’d be constantly pushing out office orders out, but right now that’s no happening. Mooyah has its own app so it allows for pick-up and delivery so that helps. We’ve gotten quite a few app orders, trying to promote that heavily. But it’s definitely something that the delivery, where we are is difficult to deal with because of lack of office population but I think it’s coming back. It’s going to be a little while until we get back to it.

Nick: The app is huge for us. So, you don’t have to go to DoorDash or Uber Eats. It’s a bit cheaper too to use the app as opposed to going third party, so we feel it’s a huge selling point. Once we get the offices back, I think consumers will gravitate toward it.

What are your goals with the brand?

Art: We’re the first location in New York City so our hope is to open quite a few in the city. We’re the first taste of Mooyah for anyone here. We talked to Mooyah about development deals for the city. […] There’s definitely room to grow and I think there’s room for Mooyah to grow as a brand.