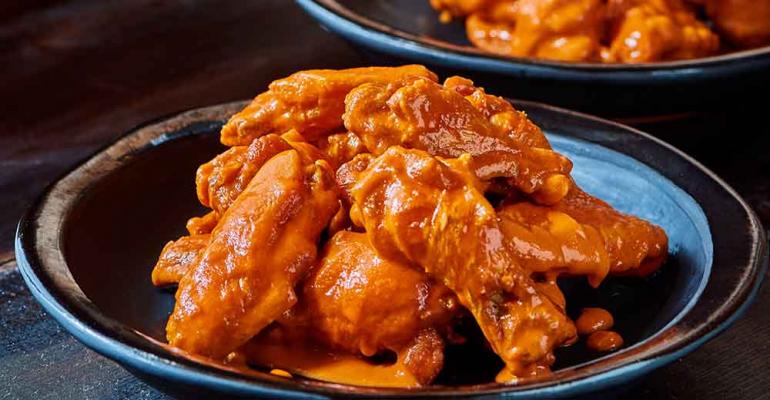 In 2022, the brand will open at least 10 locations.
Operations>Franchising

How one wing restaurant is doubling in size thanks to franchising

Meet Detroit Wing Company, the regional powerhouse that’s bridging the gap between quick-service and fast-casual with its new commissary

“It's been wild — a lot of fun,” said Gus Malliaras, owner of Detroit Wing Company, of growing the brand from 17 units to over 40 through franchising.

The fast-casual first opened in Eastpointe, Mich. in 2015 and began franchising in 2021. Before that, the brand opened its second location in 2017 and started opening around two locations per year after that until launching its franchising program.

“We have about eight more that are opening this year, and several more scheduled for next year at various stages of development, but we're up to about 32 franchises,” he said.

“It just made sense at that point to kind of structure things and do things the right way,” he said.

Part of that expansion has included a commissary kitchen located in Eastpointe, the first of two. The commissary is dedicated to one thing: sauces.

“We started to realize that as we grew and as [the franchisees] grew, you can only be in one place at one time. So, we had several people at several locations making sauces, and while it was always good, there was a lot of variation, and making barbecue sauce can be very finicky,” he said.

For this chicken wing restaurant that has 20 different sauces, that’s a big deal.

“I didn't want to have 20 locations and 20 different versions of our sauce,” he said.

The first commissary is in the back of the brand’s original location in Detroit. The 24-hour production will produce 12,000 gallons of sauce every month to each Detroit Wing Company location.

“We put a commissary together that could really support up to probably 50 or 60 restaurants, just to give us an extra year or even two if we needed to really do the big [commissary] right,” he said.

That big one, the second commissary location, is expected to open in Oakland County (part of metro Detroit) in late 2023 and will encompass 50,000 square feet, with opening production of 30,000 gallons of sauce per month and a maximum capacity of 240,000 gallons per month.

This regional brand isn’t planning on staying regional, however. It’s expanding outside of Michigan with new store openings in Florida and Ohio. Malliaras is looking into opening in Illinois, as well.

“We don't have a number in mind. We just want to keep finding good operators,” he said.