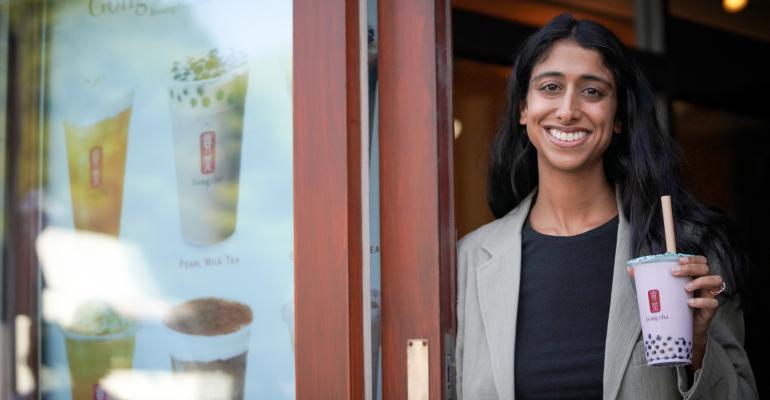 Store breakdown: Owns and operates a network of 111 stores and sub-franchisees in nine states across the U.S.

“Before starting as a master franchisee for Gong Cha in 2014, I didn’t have any experience in the food industry or the franchising business. I was working in fashion sales in New York. But I always grew up loving bubble tea, and my passion led to franchising. My father actually tried Gong Cha in Hong Kong for the first time and told me it was the best bubble tea he had ever had. […] So from there, I quit my job, traveled to Taiwan, trained with the franchisor there for two weeks, and then opened my first store in Flushing, New York.

“When I traveled to Taiwan […] I learned the register, the kitchen process, how to make the tapioca pearls, and how to brew the tea. I think the bubble tea operation is a lot easier than other fast-casual restaurants, because we are just beverage based. It took some time to learn, but probably not as long as maybe some other brands out there. […] The startup cost to build a bubble tea operation, is a lot less than what you would expect for like a fast-food restaurant, because we don't require that much equipment to create our drinks. We also have standard operating procedures for making each drink.”

“It was my first time operating a foodservice business and operating a business on my own, so there were a lot of ups and downs. I was learning how to get through the hurdles of scheduling shifts and closing the register and finding a suitable manager when I couldn't be there every day. For the first six months that we opened, I was there every single day, seven days a week from open to close, but it was a real struggle just to manage the day to day, and operations and give the best customer service with the best product. […] As long as you understand the menu, you’ll be able to create the drinks.”

“I had an agreement with Gong Cha and the plan was to open a few stores by myself in the territory that I had. That’s where we’ve grown with the business to 111 locations to date. Eight of those are stores that I own and the rest are franchisees of mine, so I’ve really been able to grow the franchise model. A lot of my franchisees also operate multiple locations and liked the brand so much they opened a second, third or fourth location, so that’s how we’ve been able to grow so quickly over the past eight years.”

Advice for other franchisees

“Find something that you really have a passion for, because it's going to be your entire life. I’m working all the time, on the weekends, etc. It’s about finding the right franchise that works for you and willing to be totally invested in it.”