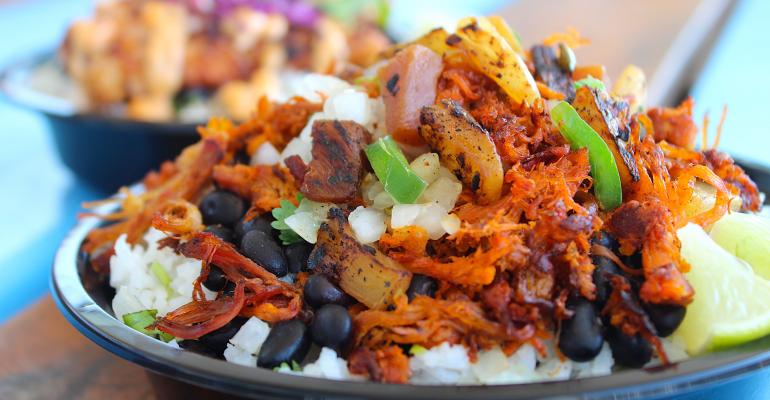 Currently, Texan tacos and margaritas chain Rusty Taco is the least recognizable name in the Inspire Brands portfolio. But this 36-unit chain has plans to go national and started the New Year with several multi-unit franchise deals to open locations in Utah, Nevada, Virginia, and Texas, with a steady pipeline of deals for the future.

This month, the company is opening three locations in San Antonio, Texas; Lawrence, Kan. and Richmond, Va. Eventually, Rusty Taco president Brendan Mauri said, they would want to get to a point where they are opening 40-50 units per year.

“We think we do really well in the South, but tacos and margaritas are universally beloved so we’re open to development throughout the whole country,” Mauri told Nation’s Restaurant News. “I think the possibilities are almost endless with the backing of Inspire as we grow.”

With a goal of increasing its size by up to 30% by the end of 2022, Mauri thinks that the Rusty Taco brand will attract franchisees from around the country because of its unique offerings: a menu of straight-forward tacos that can be made into bowls or salads, paired with flavored margaritas.

The chain has a big advantage in being able to tap into resources and leadership under the helm of the second-largest foodservice company in the world.

“Our current franchisees continue to have success and grow and are focused on certain core markets, Mauri said. “And then because of Inspire, we find quite a few franchisees in a variety of different markets. It might be an owner of a Sonic, for example. They have such penetration in their markets that there’s not a ton of room for their franchisees to expand so partnering [with Rusty Taco] is an opportunity for them to diversify with a smaller emerging brand.”

As Rusty Taco grows, Mauri emphasized the importance of keeping the “neighborhood taco stand” feel as the brand expands, so as they look for franchisees that want to be heavily involved in their communities.

Mauri is also confident in being able to stand up to and compete with other, larger Mexican or taco brands in the industry.

“We’ve gone into markets with a lot of other taco competitors and done well,” he said. “Our salsas and sauces are all made in-house […] and each taco was developed by [founder] Rusty himself with a specific set of ingredients […] We are in multiple dayparts like we’re known for our breakfast tacos but then we also have the bar segment with our margaritas, which really differentiates us.”

Mauri said the company is constantly innovating its menu by adding new tacos or new LTOs. In 2019 Rusty Taco began offering nachos for the first time and recently added buffalo chicken nachos as an LTO.

As the company expands, Mauri said that digital and off-premises innovation will be top-of-mind. For example, Rusty Taco is opening its first location with a mobile pickup window later this year, and will continue to expand and evolve the digital loyalty program that was launched last year.

“We stay true to our taco stand roots, but we’ve evolved,” Mauri said.