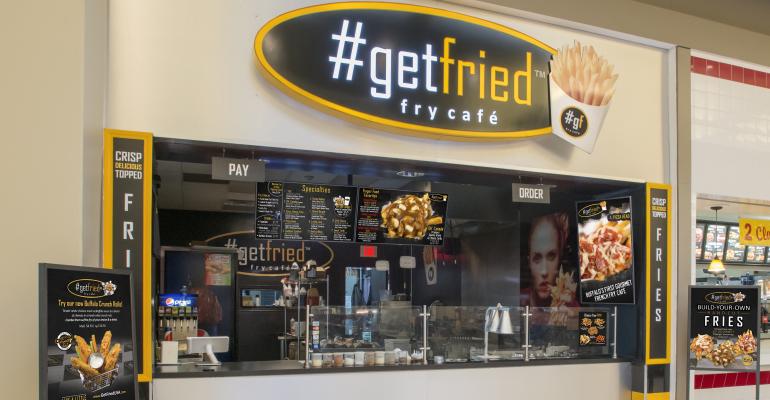 GetFried set to expand after acquisition

GetFried, a French fry-based concept, is set to expand after being acquired by a North Carolina franchise investment strategy firm.

Buffalo, N.Y.-based GetFried was acquired in June by Winston-Salem, N.C.-based ZorAbility Inc., an franchise advisory and investment strategy firm, and renamed as GetFried Franchise USA LLC. Terms of the deal were not disclosed.

Chris Covelli and Garrett Green founded the quick-service GetFried in 2015 as a mall-based concept in Walden Galleria in Buffalo, N.Y. It now has more than 10 mall locations and food truck outlets.

GetFried locations offer a variety of French fry-based dishes as well as other items such as chicken wings and fried Oreos.

The brand’s headquarters will move from Buffalo to Winston-Salem, a company spokesperson said. Mark Lyso, a recent investor in ZorAbility, has been named president of the new GetFried franchise company.

“GetFried is an ideal brand for non-traditional locations, international and highly populated markets,” Ballas said in a statement. “Through franchising, we anticipate scaling GetFried anywhere between 200 to 250 locations over the next five years.” Ballas said GetFried locations can range from 900 square feet to 1,400 square feet.

Founders Covelli and Green will continue to be involved in GetFried, the company said.

The company said GetFried locations, because of a small footprint and adaptability to mobile units, would be targeted for consumers in malls, college towns, sports arenas, casinos, airports, gas stations, movie theaters and urban entertainment districts.

Update Aug. 9, 2019: This story has been edited to include the square footage range of GetFried units.