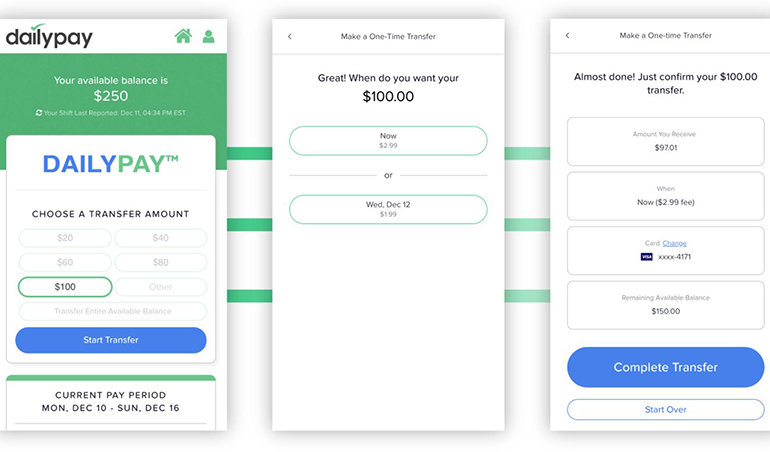 Mercado said the company plans to phase in the instant pay system to its other brands in the following order: Panera Bread, Arby’s and Taco Bell. She said the company is introducing the perk to show employees how “deeply” Flynn values them.

The company hopes to benefit, as well.

Flynn is hoping the perk will help attract employees and shrink labor turnover at each brand. The turnover rate for hourly employees is 88% at Applebee’s and 95% at Panera Bread. The quick-service brands, Arby’s and Taco Bell, have much higher rates, hovering just above 200%.

That’s well above the industry median, which is about 145%.

Mercado said it is too early to calculate any impact from DailyPay. However, the company will “absolutely measure” the perk’s effect on turnover, she added.

To date, she said about 20% to 25% of Applebee’s employees are actively using the app.

DailyPay officials say that’s a good participation rate for only being available two months at Applebee’s. Adoption rate among DailyPay clients, on average, ranges from 30% to 35%.

Mercado said employees using the service, so far, have provided positive feedback. They are accessing their earnings ahead of payday to pay for basic expenses like a family meal or groceries when they are short on cash, she said.

Roughly 78% of U.S. workers live paycheck to paycheck with 20% missing monthly payments on the smallest of bills, according to the latest research by employment website CareerBuilder.

Many retailers and restaurants are adding financial wellness tools, which often include instant pay services, to help employees struggling to pay bills before their next paycheck.

Besides giving employees access to their daily earnings, Even, which is used by Walmart, offers budgeting tools so workers can set aside funds in a savings account.

Since deploying the financial wellness tool, Noodles said 20.35% of employees have logged into the app. Of those, 51.92% have taken advantage of instant pay. Nearly 520 employees using the app have saved a total of $40,926, collectively.