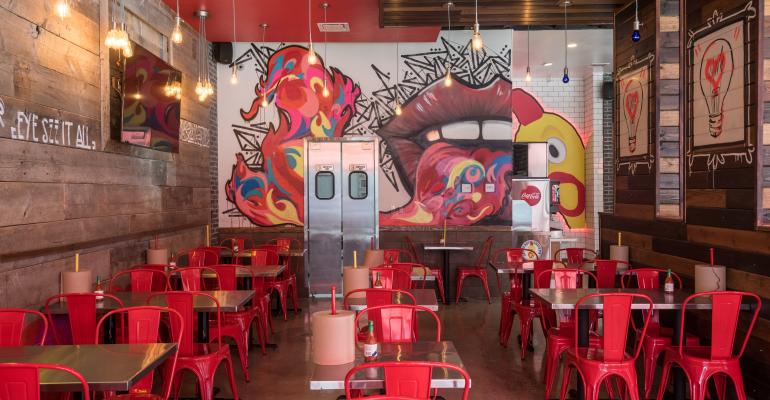 The original investor group behind Blaze Pizza has taken a partnership stake in the Dave’s Hot Chicken concept in Los Angeles with plans to franchise the brand across the country, the company said Thursday.

Under the deal, the investor group has taken a 50% stake in the fast-casual brand, which was founded initially as a pop-up in a parking lot in 2017. The four original founders, including Dave Kopushyan, Arman Oganesyan, and brothers Tom and Gary Rubenyan, retain 50% ownership and also will be franchisees.

The investment group behind the deal includes Bill Phelps, co-founder of the Wetzel’s Pretzels chain, who is now CEO of Dave’s Hot Chicken. Phelps stepped down as CEO of Wetzel’s earlier this year.

Phelps, who has grown Wetzel’s Pretzels to more than 350 locations with $150 million in sales, said the national potential for Dave’s Hot Chicken is “unparalleled.” The brand is licensed to franchise in most of the country, including California, Texas, Nevada, New York, Washington, Maryland and Illinois.

“We fell in love with this business because of the food. It’s so good and so craveable. It looks like an absolutely killer concept that we believe has national potential,” said Phelps.

Known for its hot chicken tenders and sliders offering seasoning blends at spice levels ranging from “No Heat” to “Reaper,” Dave’s Hot Chicken was founded initially in 2017 as a pop-up by four friends, who later opened their first brick-and-mortar location in East Hollywood in 2018.

That restaurant, which will continue to be owned by the original founders, boasts lines around the block in a town now crowded with an almost comical number of hot-chicken concepts.

Dave’s menu is short and simple, including kale slaw, macaroni and cheese and fries, as well as beer. The average check is “really high,” said Phelps, declining to be more specific because it is now a franchised concept.

The second location of Dave’s Hot Chicken is scheduled to open Friday in North Hollywood. That unit will be franchised by the original founder group.

“We’re thrilled to be opening a second location to meet the insane demand for our chicken,” said Dave Kopushyan, one of the original founders, in a statement. “I feel like we are living the American dream. We started in a parking lot pop-up a couple of years ago and are already opening a second location, with more in the works — all because of the love and support from our loyal customers.”

A third Dave’s Hot Chicken location is scheduled to open in December in the Los Angeles neighborhood of Koreatown. That restaurant will be franchised by the founders along with Phelps’ son and godson.

Phelps said the territory of San Diego has been sold to a franchisee multi-unit operator who is planning two locations next year, with more to come. He did not reveal the name of the operator.

Company-owned locations are also in the works. Phelps said a company-owned unit will open in the Los Angeles’ Fairfax district in the second quarter next year.

The chicken segment has been on fire in recent years.

The 13 chicken chains tracked by Nation’s Restaurant News’ Top 200 report showed strong growth in the Latest Year, with segment sales up 8.9 percent to nearly $26.5 billion. It was the fastest-growing segment in the Top 200, and the 5.7% sales growth rate for those 13 chicken chains outpaced the 3.2% growth rate for Top 200 chains overall. Atlanta-based Chick-fil-A was the category leader with estimated sales per unit of $4.6 million, and nearly $10.5 billion in Latest-Year domestic sales.

Within that segment, the spicy Nashville hot chicken style has become increasingly popular.

“Predicated on the success of chain leaders Chick-fil-A and Raising Caine’s, emerging concepts are being incubated to fill underserved niches,” he said. “Whoever cracks the code on the next big concept will find themselves in a strong position for long-term growth. Dave’s Hot Chicken checks the boxes on today’s trends and has the executive experience, founder track record and appealing concept elements for success.”

Added Phelps: “We think we’ve got the model for a great concept for franchisees. At the end of the day, when you get rid of all the celebrity and ownership stuff, what it is about is creating a model for franchisees that works and gives them a solid return on investment.”