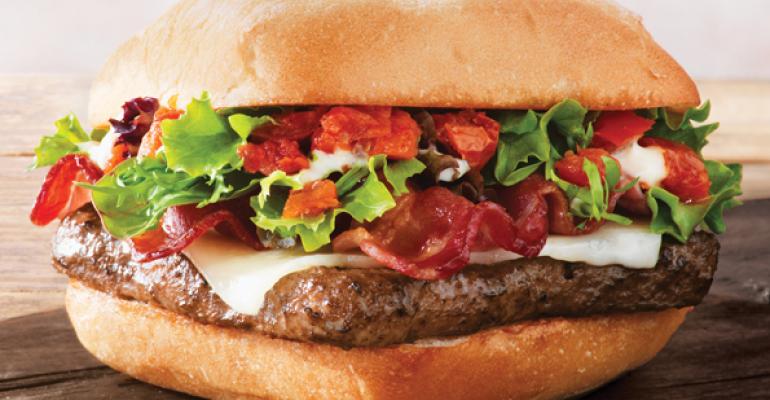 Latest LTO includes bread, toppings that are new to the burger chain

Wendy’s latest bread-driven limited-time offer is the Ciabatta Bacon Cheeseburger, which will roll out on Jan. 27 to all of the quick-service burger chain’s restaurants in the United States and Canada at a recommended price of $4.79.

The sandwich is made with a quarter-pound beef patty, aged Asiago cheese, thick-cut applewood smoked bacon and the chain’s nine-leaf spring mix, as well as two new components — rosemary garlic aïoli and oven-roasted tomatoes. Both of the new components are made off-site and shipped to Wendy’s more than 6,000 North American locations.

“This innovative sandwich reinforces Wendy’s commitment to differentiate itself from competitors with higher quality menu items to change what consumers should expect from QSR. The new Ciabatta Bacon Cheeseburger is another example of the consumer-driven brand transformation at Wendy’s,” according to a fact sheet about the new sandwich.

The new LTO, which will be available until March, replaces the Bacon Portabella Melt on Brioche introduced in November, which replaced the Pretzel Bacon Cheeseburger, served on a pretzel bun, which was rolled out systemwide in July. That burger was joined in October by the Pretzel Pub Chicken sandwich.

The Pretzel Bacon Cheeseburger was $4.69, and the subsequent specialty sandwiches were offered for $4.79.

Although ciabatta is fairly unusual at quick-service restaurants, Wendy’s is not the first chain to use the bread, which has a thin, fairly hard crust and soft interior. Jack in the Box introduced a chicken sandwich on ciabatta as far back as 2007, and last September Long John Silver’s began serving its batter-dipped fish and chicken on a ciabatta roll.