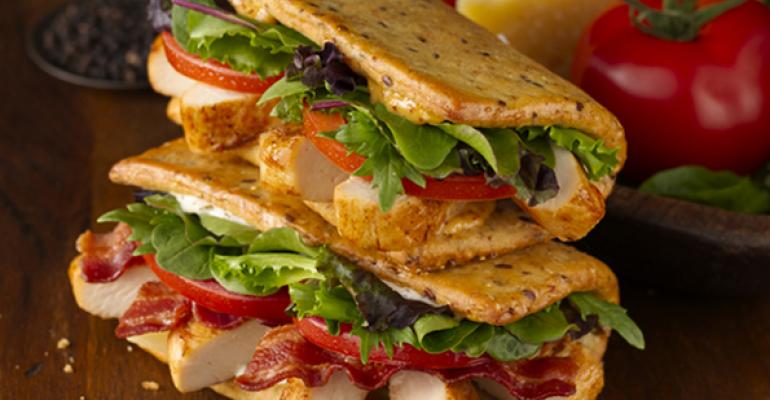 Chain looks for another sales spike from popular limited-time offer

Wendy’s has reintroduced its popular Flatbread Grilled Chicken sandwiches as a limited-time offer, looking for a spike in sales similar to the bounce the item delivered last spring.

With the encore of the sandwiches, Dublin, Ohio-based The Wendy’s Co. seeks to grow its sales of premium chicken sandwiches, which reached the highest level of the chain’s sales mix in six years when the limited-time offer’s window began in late March.

The chain is supporting the reintroduction of the sandwiches with a “#6SecondsFlat” digital campaign on Vine, Instagram and Twitter. Any guests who upload a short video of themselves tasting the Flatbread Grilled Chicken items to any of those three platforms and use the “#6SecondsFlat” hash tag will be entered into a weekly drawing for $6,000.

The second run of the flatbread sandwiches is in keeping with its ongoing “high-low” marketing plan, which balances advertising for premium products like the flatbreads and its pretzel cheeseburgers with messaging for the Right Price Right Size value menu. The company put the strategy in place after Wendy’s first quarter, when the brand lost market share of value menu sales and traffic to a point that offset the strong sales of chicken sandwiches and other core products, chief executive Emil Brolick said at the time.

The brand has not indicated whether either the Flatbread Grilled Chicken or Pretzel Bacon Cheeseburger items will join the menu permanently, though in the past some successful limited-time offers have gone from to menu mainstay, like the Asiago Ranch Chicken Club and the Spicy Chicken Sandwich.

Wendy’s apparently will also stay locked in a contest of dueling limited-time offers with hamburger segment leader McDonald’s through the rest of the third quarter. Wendy’s new promotional flight for Flatbread Grilled Chicken sandwiches — once again available in Asiago Ranch and Smoky Honey Mustard flavors — and ongoing advertising for the Pretzel Bacon Cheeseburger and the Monterey Ranch Crispy Chicken Sandwich will go head-to-head with McDonald’s Mighty Wings in September.

Securities analysts have been watching the menus of Wendy’s and McDonald’s since the end of the second quarter, when both brands reported slightly positive same-store sales in the United States, but differed widely in their outlook for the remainder of 2013. McDonald’s said it would be as prolific as ever with its pipeline of new menu items for the rest of the year, but it forecast a challenging environment in which to grow sales. Wendy’s, meanwhile, had more upbeat projections for same-store sales growth, due to optimism in the performance of the Pretzel Bacon Cheeseburger, which rolled out nationwide in July.

Wendy’s operates or franchises more than 6,500 restaurants in the United States and 27 foreign markets.