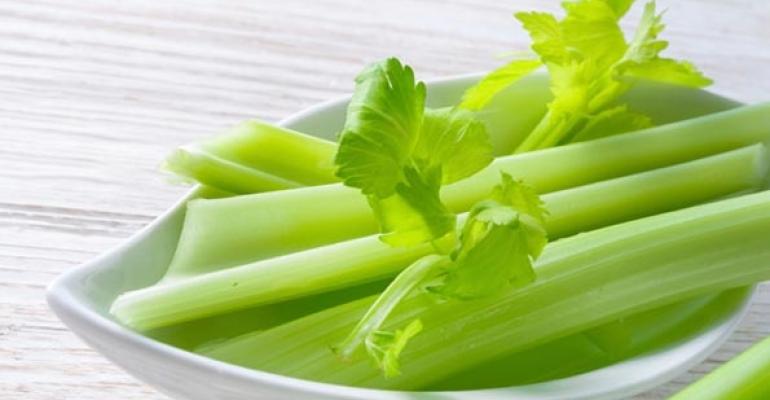 Underappreciated celery is next hot vegetable

Independent restaurants in particular have made celery and celery root stars

A few months back the food media erupted in a frenzy of enthusiasm over the next hot vegetable, the unlikely object of which was celery. Broadly used but generally underappreciated, it was getting a second look from chefs in trendy kitchens around the country. The widely bruited claim that celery is the new kale will likely prove to be a bit overblown; after all, lots of operators have yet to discover kale. But there’s no question that celery has been on the receiving end of an awful lot of attention lately, and the same is true for celeriac, the root vegetable also known as celery root that is its genetic first cousin. Separately and together, they’ve been a surprising focal point for innovation by independent operators.

Soups and salads. As an ingredient in mirepoix, the mélange that also includes diced carrots and onions, celery is already a building block in classic soups and sauces. Many chefs have made it the star of their new-age pottages, as at The Gorbals in Brooklyn, N.Y., where the Cold Fermented Celery Soup is topped with a Parmesan crouton and micro-dice of green apples. Celery root stars in a winter soup at Pinewood Social in Nashville, Tenn., accompanied by fingerling potato chips, celery and apple butter.

Cockscomb in San Francisco gives a contemporary treatment to Celery Victor, an old-school salad from that city’s venerable St. Francis Hotel, by combining finely sliced celeriac and celery leaves that have been marinated in meat stock, then finishing them with cilantro and chicken-skin cracklings. Although this version omits the bed of romaine present in the original, lots of other restaurateurs have capitalized on the celery-and-lettuce connection. Coppa Enoteca in Boston makes a Celery Caesar with homemade Caesar dressing, puffed farro, lemon zest and fried garlic. In New York City, All’onda offers a Celery & Fennel Salad, inspired by chicken wing appetizers, that includes blu di bufala cheese and Calabrian chiles, while Genuine Roadside in the Gotham West Market serves up an apple-celeriac slaw with sambal mayonnaise.

Braised and fried. Braised celery is a standard side dish in England and France, but much less common here. An exception is upscale Restaurant Daniel in New York City, where braised celery has accompanied cedar wood wrapped hamachi; and both braised celery and puréed celery root have appeared alongside short ribs braised in red wine. Hard Water, an American whiskey bar in San Francisco, has offered an unlikely but creative bar snack of crispy fried milk-braised celery hearts with Old Bay aïoli. Little Park in New York City innovates with a “celery root schnitzel sandwich,” in which the vegetable is breaded, fried and topped with a slaw of Brussels sprouts and pickled apple. An equally unusual treatment is the popular caramelized celeriac cappelletti with coffee, hazelnut, brown butter and truffles at Tête Charcuterie in Chicago.

Bitter and sweet. Milk Bar in New York City regularly pushes the envelope with unusual desserts like carrot-cake variations that include celery root, potatoes and beets, but the recent celery root Bundt cake with bourbon frosting was a real head turner. Niche in St. Louis touts its New American cuisine and dishes up humble ingredients in a fresh way, like buttermilk panna cotta with celery granita. And bartenders at Ampersand in downtown Savannah, Ga., created an updated version of the iconic French 75 cocktail that retains the gin, sparkling wine and lemon juice of the original, but adds celery bitters for a modern-day touch.

Independents dominate. The celery revival has clearly been led by chefs at independent restaurants and has yet to make a dent in the chain market, despite the fact that celery is a staple in most coolers. It typically plays second fiddle to the ubiquitous chicken wing, and it reliably adds both color and crunch to salads like Rock Bottom Brewery’s chicken Waldorf, which updates the 19th century classic with apple chips, candied walnuts and sun-dried cranberries alongside the requisite celery.

Chains will need to work fast to catch up on this trend, since food writers have already anointed the new next kale. The object of their attention this time around is the broccoli leaf, a previously discarded portion of the plant that’s been turning up on trendy tables on the East and West coasts.

Nancy Kruse, president of the Kruse Company, is a menu trends analyst based in Atlanta. As one of Linked In’s Top 100 Influencers in the US, she blogs regularly on food-related subjects on the LinkedIn website.