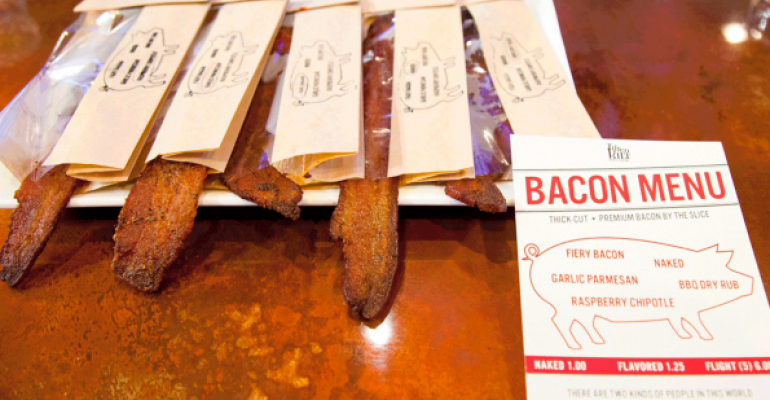 Tilted Kilt
<p>Tilted Kilt has a bacon bar that offers thick-cut bacon in a variety of flavors&nbsp;at $1 per slice.</p>
Consumer Trends

Tilted Kilt Pub & Eatery is experimenting with a bacon bar.

When parent company Tilted Kilt Franchising Operation LLC opened a corporate restaurant in Tempe, Ariz., in August, it installed a pig-shaped neon sign over the bar with the words “Bacon Bar.”

Inspired by Krispy Kreme’s “Hot Now” sign, alerting customers when its doughnuts are ready, management turns on the sign when it decides to offer thick-cut strips of bacon for $1 apiece.

“Our president, Ron Lynch, was out in the California market, saw a concept that was doing some bacon stuff, and thought it might be something we might want to try out in our pub,” Tilted Kilt director of operations Matt Hamilton said. “Right now we’re testing it in our Tempe location, and it’s going pretty well for us.”

The large strips of bacon — eight pieces to the pound — are available in six flavors: chipotle raspberry, barbecue, garlic Parmesan, fiery (with a spicy dry rub) and “naked,” or plain.

Management generally turns on the Bacon Bar sign during the 4 p.m. to 7 p.m. happy hour, and on weekends during football season, when games start as early as 10 a.m.

The bacon can be bought individually, but Hamilton said Tilted Kilt is selling a lot of six-piece flights.

The bacon is pre-cooked and seasoned, laid flat and stored cold, and then reheated to order in a convection oven for one minute and 15 seconds.

“We had to play around with it a little bit,” Hamilton said. “Originally we were reheating it on the flattop, but with all the burgers that we sell [during happy hour], it wasn’t real functional.”

He said customers are ordering two or three slices with beer during happy hour, and also adding a slice or a flight to weekend breakfast orders.

Sales aren’t particularly high — around 2 percent to 3 percent of sales, according to Hamilton — because of the low price, but the bacon is performing well as an appetizer or a snack.

There are no immediate plans to roll the bar out to Tilted Kilt's more than 95 mostly franchised locations in the United States and Canada, largely because it’s hard to find a steady supply of such thick bacon, Hamilton said.

“Sourcing a consistent eight-count bacon product nationally has been a little bit of an issue for us,” he said. “If we could come up with a consistent program for it, it could be something that we could potentially offer [to franchisees]. I don’t know that we would mandate it nationwide.”