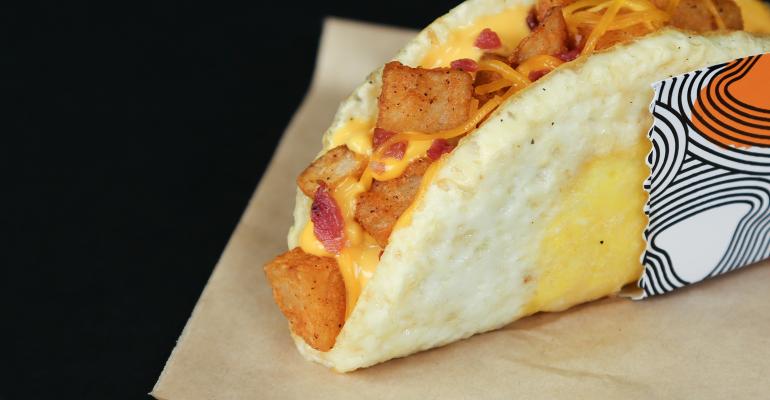 Taco Bell Corp. will roll out a new Naked Egg Taco, which has a shell made of fried egg, at breakfast nationwide beginning Aug. 31, the company said Tuesday.

The limited-time breakfast option has a filling of potatoes, cheese and a choice of bacon or sausage and will be priced at $1.99.

The Naked Egg Taco will also be available in a bundle that will include a coffee or medium drink and a choice of two Cinnabon Delights or hashbrowns for $3.99.

A Taco Bell spokesperson also confirmed Monday that the brand was testing a Firecracker Burrito in some California markets for a possible rollout later. “Shell innovation is at the core of where we experiment – and whether it’s crispy chicken, biscuits or waffles that wrap up menu item classics,” Matthews said.

Prior to the launch, the Irvine, Calif.-based division of Yum! Brands Inc. will let customers in select cities reserve tables at “Bell & Breakfast” events via OpenTable.

Taco Bell said it tested the Naked Egg Taco in Flint, Mich., prior to the national launch.

A spokesperson confirmed Monday that the Firecracker Burrito was in test. Various Internet websites, such as Reddit, have reported about the item, which includes the regular burrito ingredients as well as a packet of what the company calls “popping spices” and to which others refer as “spicy Pop Rocks.” The burrito is being tested at $1.29 with an additional 20 cents for the popping spices packet. The trial includes two flavors, Popping Spicy and Popping Cheesy.

Taco Bell said the next phase of the Firecracker Burrito test will launch Oct. 5 in the Toledo, Ohio, market.

In a second-quarter earnings call, Taco Bell said it had cut drive-thru wait times by 10-seconds per ticket.

“Taco Bell made a concerted effort to focus on the basics for the summer, so they re-trained and re-certified the system on the fundamentals of speed – deployment, tracking and recognition,” the company told NRN via an emailed statement.

“Emphasis on those fundamentals led to improved times at the window, which in turn took total times down.”

Taco Bell has more 7,000 restaurants in the United States and more than 250 abroad.