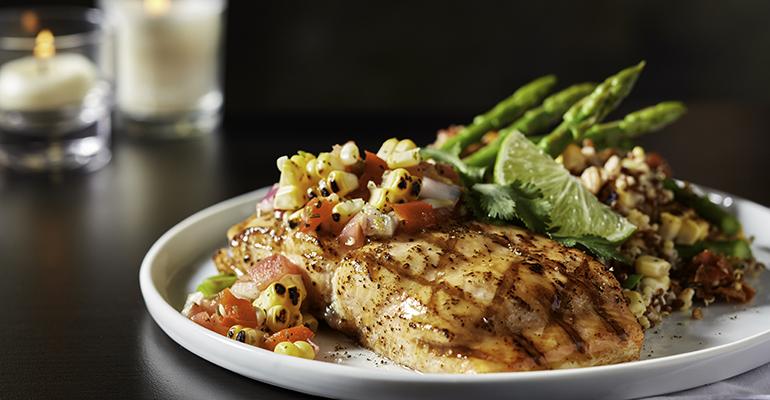 Sweet heat from Brazil is embraced in the U.S.

As flavor trends go, they don’t get much hotter than hot honey, the sticky-sweet sizzler that has migrated from the pizza segment to become the “it” flavor of the moment.

Hot honey boasts an international backstory, in which a young American studying in Brazil becomes enamored with jars of honey that contain embedded chiles. Like liquid amber, they appear atop tables at pizzerias throughout the country and provide the inspiration for what eventually becomes Mike’s Hot Honey, the king of the category.

Turning up the heat on pizza.

Pizzamakers stateside have embraced the condiment, and while some use a prepared product, others invent their own fiery finishing touches. At Via 313, which operates three stores and two trailers in Austin, Texas, The Bobo Brazil, a house specialty made with hot Calabrese sausage, red pepper flakes and hot honey, pays homage to its origins. Paulie Gee’s, which is expanding from its Brooklyn base to markets like Chicago and Columbus, boasts the incendiary Hellboy that combines Parmigiano Reggiano with fresh mozzarella, spicy soppressata picante, tomatoes and hot honey.

Speaking of Chicago, newly opened Pizza Friendly Pizza, a rock-and-roll inspired casual eatery from a Michelin-starred chef, featured a promotional Apple of My Pie that included apple, Gouda cheese, caramelized onion and thyme spiked with hot honey. And speaking of Brooklyn, local favorite F&F Pizzeria is situated in a converted garage there and wins fans with pies like The Partanna that consists of mozzarella and red onion, together with a combination of Calabrian chiles and Sicilian honey. 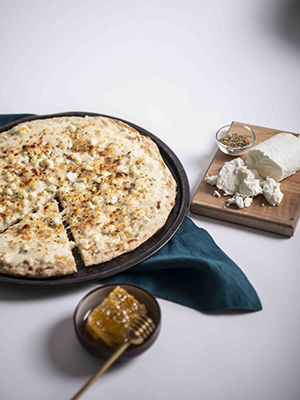 West Coast pizzas are on fire with sweetness, too. In San Francisco, Square Pie Guys create the aptly named Mean Green Sausage Machine from ricotta, sausage, roasted broccoli, chile flakes and a finishing flourish of hot honey; while across town at Capo’s by Tony Gemignani, The Deville consists of soppressata picante, ‘nduja, mozzarella, hot red pepper oil and local honey. And bicoastal Roberta’s offers a Bee Sting with tomato, mozzarella, soppressata, basil, chile and honey at both the Los Angeles and Brooklyn locations

Chefs are using spicy honey to spike up lots of other dishes, like Firebirds Wood Fired Grill’s Honey-Chile Glazed Salmon. The February feature was served over ancient grains pilaf with asparagus, roasted tomato and grilled corn, crowned with charred corn salsa. At the same time, BJ’s Restaurants & Brewhouse sweetened the deal with a Valentine’s Day dinner bundle that included Honey-Sriracha Brussels Sprouts as a side dish, while Chick-fil-A tested a Honey Pepper Pimento Chicken Sandwich in selected markets last fall.

The appetizer listing at Rock Bottom Brewery features Classic Wings with Chipotle Honey BBQ Sauce, and among the repertoire of wing sauces at Buffalo Wild Wings is the Honey BBQ that promises “sweet, gentle heat.”

Not all honey is hot.

Starbucks is one chain that dials down the temperature with the Honey Almondmilk Flat White and the Honey Oatmilk Latte. Jamba taps into the horchata trend with the Lotta Horchata with unsweetened almond milk with fat-free vanilla frozen yogurt, cold brew coffee, cinnamon and, yes, honey.

On a less liquid note, in New York City a pair of restaurateurs have been making headway with a Korean comfort classic that marries potatoes with honey butter. Nowon, a Korean-American gastropub, puts it on the Crispy Tater Tots appetizer, while Oiji, which dishes up “refined, authentic Korean,” goes uptown with a sly dessert in which Honey Butter Chips can be dipped in vanilla ice cream.

Preparing to open its first U.S. operation, PizzaForno is a maker of automated pizza ovens in 20 locations around Canada. Among the menu options is Honey Chèvre Pizza, a vegetarian offering that features the titular French goat cheese together with mozzarella, flowering oregano, blanco cream, and honey to top them off. By contrast, The Holder, a sandwich special at sandwich specialist Breadlam in Los Angeles, appeals to carnivores with Serrano ham alongside Manchego cheese, olive oil and honey.

In the chain-restaurant culinary canon, there’s nothing new about the combination of sweetness with heat, which savvy chefs have been using successfully for decades to tempt their spice-averse patrons. What has changed over time are the ingredients used and the range of applications, but like the current hot-honey craze, their aim has always been to surprise and delight the diner.

Nancy Kruse, President of the Kruse Company, is a menu trends analyst based in Atlanta. As one of Linked In’s Top 100 Influencers in the U.S., she blogs regularly on food-related subjects on the Linked In website.