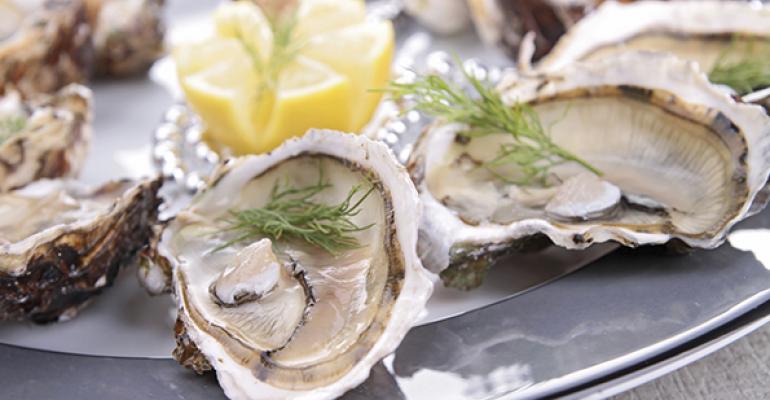 Oysters are becoming more mainstream, but restaurants that offer the mollusk on their menus are likely considered adventurous by consumers, and could gain particular favor among young men, according to a report from menu research firm Datassential.

Oysters appeared on 9.6 percent of all menus nationwide at the end of 2014, a 15.7-percent increase from 2010. They were particularly prevalent at fine-dining restaurants, where they appeared on 40.9 percent of menus, according to Datassential.

The firm put oysters at Stage 2 of its four-stage menu-adoption cycle. At Stage 1, or “inception,” an ingredient is found mostly in ethnic independent restaurants, fine-dining restaurants and neighborhood ethnic markets. Oysters are at the “adoption” stage, according to Datassential, when the trend is picked up by food trucks and fast-casual and casual-dining independent restaurants, as well as specialty grocery stores and gourmet food retailers.

Oysters are most commonly found on the menu at seafood restaurants, although they also appear in fine-dining restaurants and at casual independents, according to Datassential. They’re used in appetizers and small plates, as well as in sandwiches, such as the classic New Orleans oyster po’ boy, and as beverages in the form of the oyster shooter — typically an oyster and hot sauce doused with vodka. They have very high consumer awareness, at 64 percent, and appeal primarily to men and consumers ages 30 and younger.

“The demand for oysters will continue to grow as farms and chefs introduce new sustainably-farmed varieties to the public,” Datassential said in a recent report.
“Oyster bar concepts will also continue to thrive,” the firm added.

Oysters are widely praised by sustainability groups as natural filters for the bodies of water in which they grow.

A higher percentage of people with annual incomes of more than $100,000 — 51 percent — said they would try oysters, compared with 41 percent of people with annual incomes under $25,000. The youngest and richest groups also were inclined to think of oysters as innovative or adventurous — 46 percent of those groups defined oysters that way compared with a national average of 40 percent.

Datassential pointed to a variety of “highly-acclaimed oyster bars” that have opened in recent years, such as Pearl Dive Oyster Palace in Washington, D.C., The Oyster Bar attached to The Optimist restaurant in Atlanta, The Walrus and the Carpenter in Seattle, The Ordinary in Charleston, S.C., and L&E Oyster Bar in Los Angeles.

The firm also noted that chefs were using oysters as platforms for their skill and creativity. For example, it noted that Melissa Kelly of Primo in Rockland, Maine, offers Oysters Three Ways: raw with Prosecco mignonette, roasted with marrow butter and garlic chips, and fried with scallion aïoli. Oyster dishes at Naha in Chicago include “French Kiss” Oysters, which come with Chardonnay vinegar sorbet, cucumber, Australian finger limes and shiso. Cory Lee, chef of Benu in San Francisco, serves an oyster course that harkens to traditional Korean bo ssam, matching an oyster with braised pork belly and kimchi crème fraîche.