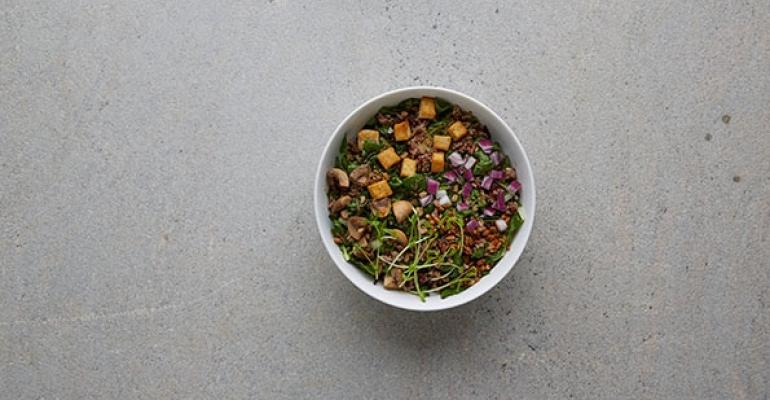 There’s something comforting and wholesome about eating food from a bowl, and restaurants have come to realize that these liquid-friendly vessels are great vehicles for more than cereal and soup. They present ingredients beautifully, are more portable than plates, and they let the people eating from them customize exactly what each bite is going to taste like.

“I think it’s fun to eat out of a bowl,” said Heather Gardea, vice president of research and development for El Pollo Loco. The 415-unit chain based in Costa Mesa, Calif., has offered a Pollo Bowl since 1992.

The Original Pollo Bowl, still on the menu, is a value proposition, priced with a drink for less than $5. It’s a smaller meal of the chain’s signature marinated, grilled chicken breast, chopped and mixed with pinto beans, rice, diced onions, cilantro and pico de gallo.

The chain has reworked its bowls in recent years to appeal to a broader audience beyond the budget-conscious. That audience includes the calorie counter, who can get bowls of chicken, black beans and broccoli with fewer than 500 calories, and “the big appetite weight lifter guy,” as Gardea describes him, who “might like the ultimate double bowl” of chicken or shrimp over pinto beans, rice, cabbage, sour cream, Jack cheese, avocado and pico de gallo.

El Pollo Loco has also been offering limited-time offers in bowls such as the Chicken, Shrimp & Sausage Paella Bowl.

“The bowl is lending itself to the various definitions of health for people,” Gardea said.

Whether it’s a low-carb or gluten-free option, a move toward beans and grains, or a protein-centric meal, bowls can fill that need. On top of that, she said they’re photogenic — important for the Instagram enthusiasts among your customers — and easier to eat than food served on a plate.

About 15 percent of all restaurants now serve entrées in bowls, according to menu research firm Datassential, and large restaurant chains with 250 or more locations are leading the charge: More than 26 percent of large chains serve entrée bowls.

That includes 1,800-unit Panera Bread, based in St. Louis. The chain introduced a line of four “broth bowls” at the beginning of 2015. With a soy-miso broth, two of Panera Bread’s bowls have soba noodles with chicken or edamame. The other two bowls have quinoa and lentils with chicken or a hard-boiled cage-free egg. All of those bowls are priced at between $7.99 and $9.49, depending on the location, and fit clearly in the better-for-you category with trendy quinoa and soba buckwheat noodles.

Fazoli’s, a 212-unit pasta chain based in Lexington, Ky., has gone the comfort food route with the Ultimate Spaghetti and Ultimate Fettuccine bowls it introduced as limited-time offers last year. The pasta bowls are being added to the permanent menu with the chain’s current menu revamp.

The spaghetti bowl has the pasta with marinara sauce, meatballs, Italian sausage, bacon and mushrooms. The fettuccine has Alfredo sauce, roasted chicken, bacon, mushrooms, broccoli and a cheese-spice blend. They sell for $6.99 to $7.50, depending on the location.

“They are a great, hearty comfort food with a homemade, ‘What mom would make’ appeal,” Fazoli’s president and CEO Carl Howard said in an email.

“Bowls offer a nicer presentation when using a lot of ingredients and are easier to eat than plated pastas,” he said.

Howard said the bowls were added to the permanent menu after selling “extremely well” as limited-time offers.

Bowls make up 28 percent of the sales mix at California Tortilla, a 43-unit fast-casual Mexican chain based in Rockville, Md. Sixteen of those percentage points come from burrito builds that are poured into a bowl instead of wrapped in a tortilla, and the remaining 12 percentage points come from the chain’s three items that are presented as bowls.

The bowls — the California Sunset Bowl with grilled chicken and vegetables, the Enchilada Bowl, and the Mixed Grill Bowl with chicken and steak — are priced at a premium — around $8, compared to burritos that start at $6.59.

Keith Goldman, the chain’s chef and chief operating officer, said having a bowl instead of a burrito cuts out about 300 calories by getting rid of the tortilla, and it’s also easier to eat.

“A burrito is a two-handed commitment, someone eating with gusto. … It gets a little messy sometimes,” he said, adding that someone in a suit on the way to an interview might opt for a bowl instead of a burrito to avoid the potential mess.

Laura Cissel, California Tortilla’s vice president of marketing, said that bowls do seem to appeal in particular to the health conscious, noting that the chain’s current limited-time offer, a Super Food Burrito, “tends to lend itself to people who are a little bit more health-conscious,” is being sold more in bowls than most other burritos.

The Superfood Burrito is made with a choice of chicken or vegetables, “Mexican quinoa” (a blend of quinoa, black beans, corn, jalapeños and salsa), feta cheese, Roma tomatoes, Haas avocado slices, kale slaw and an avocado-honey vinaigrette. It’s $7.39 at most locations.

Other Mexican chains also have rolled out bowls in the past year, such as On The Border Mexican Grill & Cantina, based in Dallas. Last May the 144-unit casual-dining chain introduced the Border Bowl, with burrito fixings and choice of meat or Portobello mushroom. It’s priced starting at $8.99.

Pret A Manger, a 400-unit chain based in London that specializes in premium grab-and-go food, introduced four bowls to its United States locations — in New York City, Boston, Chicago and Washington, D.C. — in April.

Olly Smith, the chain’s vice president of food, said that the bowls fill a middle ground between a sandwich and a salad. “A salad keeps you busy eating for a period of time, but it doesn’t keep you full the whole afternoon,” Smith said.

“They’re selling really, really well,” he added, noting that the plastic bowls themselves, designed to fit in the palm of the hand, are convenient for his many on-the-go customers.

The chain, which recently announced plans to move its headquarters from Washington, D.C., to Los Angeles to spur growth in California, introduced a Hollywood Bowl as a permanent addition to its LA location. The $11.25 dish has organic wild rice and shredded kale, jicama, local raisins, sprouted almonds, goat cheese, roasted chicken and balsamic vinaigrette.

Although most entrée bowls are savory and often eaten at lunch, there’s a growing category of fruit-based bowls that are almost like deconstructed smoothies.

For instance, Juice it Up!, an 80-unit chain based in Irvine, Calif., introduced Smoothie Bowls as a limited-time offer last April. Starting at $6.95, the menu item was a choice of a smoothie poured into a bowl and topped with bananas, granola and a drizzle of honey.

Robeks, a 95-unit chain based in Los Angeles last summer introduced a line of trendy açaí bowls as limited-time offers last summer. Starting at $6.99, these items start with a frozen purée of the Amazonian fruit and are topped with grains and fruit and other textured food to make them look like more of a full meal. The Seedsational Açaí Bowl really stressed açaí’s super food reputation by pairing it with chia, flax seeds and bee pollen along with the fruit and granola.

Tara Gilad, co-founder and COO of Vitality Bowls, a 19-unit chain based in San Ramos, Calif., said her restaurants’ 15 different bowls, mostly açaí-based, account for about 80 percent of sales, and she says serving the food in bowls makes the food more substantial and more enjoyable.

“Putting it in a bowl is so fun to eat, because it’s topped with granola and banana and chia seeds. You’re eating a meal, versus just drinking a smoothie,” she said.

She added that her customers can enjoy different textures and separate flavors in the bowl, since the different flavors can literally be layered.

Gilad said she gets a wide array of customers, young and old, looking to eat food that’s good for them and also tastes good.

“Our food is healthy, but it tastes phenomenal,” she said. “Even for people who don’t eat healthy, it tastes good so they want to come back.”