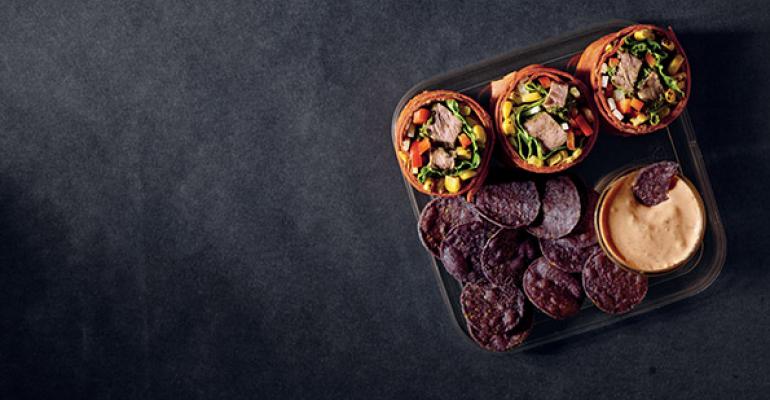 Move over McDonald’s, Wendy’s and Burger King: Starbucks Corp. wants in on the bundled-meal game — although at about twice the price.

Customers can choose one from among 24 lunch items, including sandwiches, panini, salad bowls, wraps or a bistro box. Pricing varies by market, but generally the items are priced between $4.95 and $6.95 on average, the company said.

With that, they can add a snack from about 16 options priced at $1.75 or less, like bagged popcorn or chips. Along with that comes the choice of a piece of fresh fruit, like a banana, or a That’s It Fruit Bar (typically about 95 cents to $1.95), as well as one bottle of Ethos water, which is typically about $1.95.

Coffee or tea, however, is not an option for the bundle, which is available at company-owned units in the U.S. through May 30.

The deal comes as the leading quick-service chains battle for value-seeking customers with their own variations on bundled meals.

Wendy’s launched a four for $4 deal in October 2015, and it appears to be gaining traction.

McDonald’s joined in a few months later with its McPick 2 for $2 offer that later morphed into a 2 for $5 deal. Later this month, the offer will reportedly allow for regional variations, according to BurgerBusiness.

Burger King in recent months has been promoting its 5 for $4 bundled meal, and variations like the 2 for $5 mix-and-match sandwiches and 2 for $4 Croissan’wich deal at breakfast.

According to NPD Group, quick-service bundled meals have been driving traffic.

Starbucks has been steadily building on the sale of food at both breakfast and lunch in recent years.

During the March 27-ended second quarter, food sales overall represented about 20 percent of U.S. revenue for the first time, contributing 2 percentage points to the same-store sales increase of 7 percent for the Americas region.