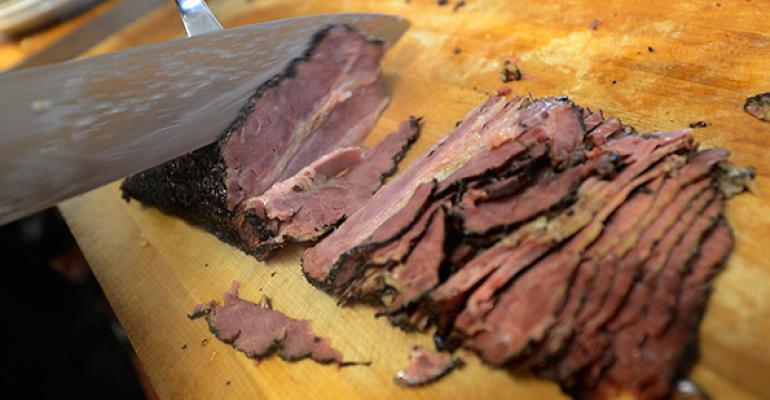 Everything from vintage cocktails to classic cars from earlier generations is hot once more. For Baby Boomers, there’s an element of nostalgia in retro styles and products, while Millennials’ attraction is more about discovery. Retro foods have also been sweeping menus across the U.S., and they’re no less popular. Essentially comfort foods with a hipster edge, familiar dishes have been reinterpreted, often with a wink and a bit of fun as chefs give them an updated twist.

Uptown bar bites. Scotch eggs, which are popping up all over on bar menus and appetizer listings, trace their roots to England. A Scotch egg is a hard-boiled egg that’s been coated in ground sausage, rolled in bread crumbs and deep fried or baked, though versions that appear on this side of the pond are often more complex. At Craftsman and Wolves, a contemporary pâtisserie in San Francisco, The Rebel Within, which combines Asiago cheese and green onion with the sausage and a soft-cooked egg, is served on a muffin. Three Aces, self-described as “Italian countryside meets the American farmhouse … in Keith Richard’s basement bar” dishes up savory fare in Chicago, including a Porchetta Scotch Egg, accompanied by house-made bacon Sriracha. Restaurant 1833 in Monterey, Calif., offers a Mediterranean variation on the theme with the Crispy Hen Egg, which substitutes prosciutto for sausage and adds sherry vinaigrette. The Fat Radish in New York City menus the classic version with cornichons and seeded mustard, while Minnesota State Fair revelers can nosh on a Scotch egg on a stick.

Deviled eggs, American cousins to the Scotch variety, are everywhere too. Nashville’s Mason’s Southern Provisions offers A Devil of an Egg, with bacon marmalade and pickled mustard seeds, while Mr. Lucky’s Café in Las Vegas features Shout at the Devil Eggs, six Buffalo-style deviled eggs finished with bacon and micro celery. The Counter, one of the early better-burger competitors, added Deviled Eggs with Cheddar, bacon and parsley to its appetizers last spring. They do double duty at Del Frisco’s Grille, where Deviled Eggs are topped with truffle-chive vinaigrette as a starter and used as a garnish on the signature Steakhouse Salad.

Cool casseroles. As side dishes go, casseroles don’t get a lot of love, but they are versatile, delicious and suddenly cool. They never really went out of fashion at many restaurants with southern roots. Venerable French-Quarter stalwart The Old Coffeepot in New Orleans, for example, features a Green Bean Casserole, while Ruth’s Chris Steak House offers a Sweet Potato Casserole, and Cracker Barrel Old Country Store Inc. features its Hashbrown Casserole as a side-dish option.

Johnny Casserole in Chicago specializes in new takes on old standbys, like Ain’t Your Mama’s tuna noodle casserole with fettuccine and artichoke hearts. Haute Dish in Minneapolis hit a home run with the Tater Tot HauteDish, a deconstructed casserole of short ribs, porcini mushrooms, green beans and house-made potato tots. The latter are another trendy throwback that made the scene in a limited-time offer at Huddle House. The Tater Tots-based dishes, called Hot Tots, layered the potato nuggets on open-faced omelets crowned with cheese, sausage and other ingredients. At The Greenhouse Tavern in Cleveland, side dishes include Carrot Tater Tots with crispy, twice-cooked carrots and raita.

New-age delis. Jewish-American comfort classics are being reimagined by a new generation of chefs. At Russ & Daughters in New York City, the Pastrami Russ sandwich riffs on tradition with pastrami-cured salmon, sauerkraut and mustard on a bagel or bialy. Pastrami has been on the comeback trail recently, turning up in a host of unusual dishes. Wise Sons in San Francisco does a Pastrami Cheese Fries, which includes Swiss cheese, caramelized onion, Russian dressing and pickles, while Slater’s 50/50 features the Pittsburgh Pastrami sandwich, topped with both coleslaw and French fries. And New York Mets fans can enjoy a double header at Citi Field eateries, with Pastrachos, pastrami-topped nachos, and the Pastrami Dog, topped with house-braised pastrami.

Nancy Kruse, President of the Kruse Company, is a menu trends analyst based in Atlanta. As one of LinkedIn’s Top 100 Influencers in the US, she blogs there regularly on food-related subjects.