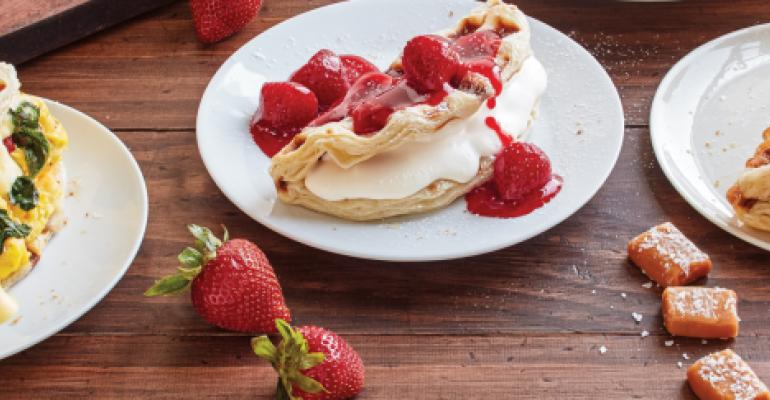 Restaurants ratchet up creativity at breakfast

All-day offerings, balancing indulgence and healthfulness, and innovation from independents are shaking up this hot daypart

It’s no wonder that foodservice operators are rushing to explore and exploit the morning daypart. Analysts at The NPD Group report that breakfast has been the only daypart to see consistent traffic growth over the past few years, and that morning-meal visits grew about 5 percent in 2015. Diner interest has prompted restaurateurs to ratchet up creativity as they position their breakfast menus to address a wide range of consumer demands.

It’s about around-the-clock convenience. Arguably the biggest food story of 2015 was McDonald’s introduction of all-day breakfast in October. Customers responded with enthusiasm, and competitors responded with innovation. White Castle moved aggressively to pre-empt McDonald’s with the September 2015 launch of its Anything, Anytime breakfast program, and shored up the initiative with Waffle Breakfast Sliders — diminutive, hand-held Belgian-waffle sandwiches. Jack in the Box, already serving breakfast all day, amped up promotion efforts behind its Jumbo Breakfast Platter, which consists of scrambled eggs, hash browns, mini-pancakes, and sausage or bacon. And while Burger King maintains conventional breakfast serving hours, two years ago it began offering its burger menu from the time it opens its doors, giving it an edge with pre-lunch burger cravers. 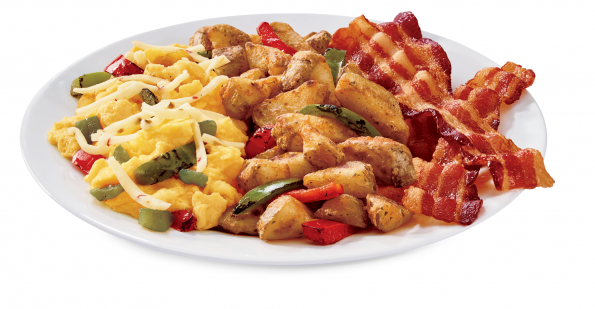 Full-service chains, often at a disadvantage when it comes to grab-and-go items, underscored their breakfast bona fides by unleashing a volley of creative dishes that consumers can’t make at home. Shari’s, a regional chain based in the Pacific Northwest, debuted an unexpected Breakfast Poutine, its early-morning homage to the Canadian specialty. In Shari’s version, French fries are smothered in gravy, cheese, bacon and green onions, then topped with Hollandaise and a fried egg. By contrast, IHOP caters to an A.M. sweet tooth with a Salted-Caramel & Banana Criss-Croissant, in which a croissant is baked in a waffle iron, filled with dulce de leche cream and sliced bananas, then finished with a salted-caramel drizzle. The Columbus, Ohio-based Sunny Street Café chain regularly turns heads with clever offerings like Churro French Toast, a takeoff on the Spanish dessert classic, made with flash-fried French toast dusted in cinnamon sugar, topped with a tres leches drizzle and served with a side of dark chocolate sauce.

It’s better for you. Not one to let the early-morning grass grow under its units, McDonald’s has been testing some unexpected breakfast entrées, like a healthful breakfast bowl topped with turkey sausage and egg white over a bed of kale and spinach that clocks in at a modest 250 calories. Breakfast-and-lunch specialist First Watch boasts The Healthier Side menu that includes trendy avocado toast made with thick-cut, whole-grain toast schmeared with fresh smashed avocado, extra virgin olive oil and Maldon sea salt; the item is served with two basted cage-free eggs and fresh herbs. While much of the bill of fare at the two Holler & Dash Biscuit Houses in Alabama focuses on biscuits crowned with typically heartier Southern ingredients like fried pork tenderloin and sausage gravy, the Flying Frittata lightens things up with egg white, roasted vegetables, kale, herbed Greek yogurt and, to keep it anchored firmly in the South, a dash of hot sauce.

It’s a magnet for independents. Lured by the abbreviated hours and the heightened creativity of the breakfast-and-lunch segment, young chefs are embracing it with gusto. Eggslut, located inside Los Angeles’s Grand Central Market, bases its menu on “a true love of eggs,” and demonstrates that affection with signature dishes like Slut, which puts a cage-free coddled egg on top of a smooth potato purée, poached in a glass jar, topped with gray salt and chives, and served with slices of baguette. The menu at Sqirl, also in LA, taps into the porridge revival with Brown Rice Porridge made with Kokuho Rose brown rice, toasted hazelnuts and a choice of jam. Milktooth in Indianapolis has garnered national attention with its reinvention of breakfast favorites, as with the Andouille and Sweet Corn Maque Choux Dutch Baby. The savory pancake is finished with burnt-lime aïoli and pickled pepper slaw.

Looking ahead, more breakfast specialists will provide an alcoholic boost to their beverage offerings. Breakfast Republic and Another Broken Egg offer full bar service, while Famous Toastery has unveiled wine parings to match its omelets.

Nancy Kruse, president of the Kruse Company, is a menu trends analyst based in Atlanta. As one of LinkedIn’s Top 100 Influencers in the US, she blogs regularly on food-related subjects at LinkedIn.