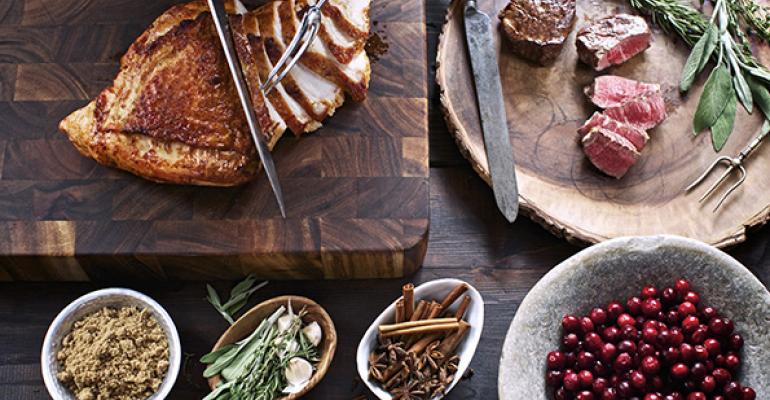 A growing number of restaurants are staying open to serve Thanksgiving meals, but a number of chains are extending the celebration, offering Thanksgiving-oriented specials throughout the end of the year.

The proliferation of Thanksgiving-themed specials has been spurred by consumer interest in culinary mashups and “flavors in a new form,” according to culinary consultant Aaron Noveshen of The Culinary Edge in San Francisco. Extending the holiday season also lets restaurants get more out of their limited-time offers.

“If they can stretch out a holiday, they extend the value of an LTO,” Noveshen said.

Among those serving on and around Thanksgiving, Golden Corral, the 504-unit buffet chain based in Raleigh, N.C., says it will cook 50,000 turkeys — 800,000 pounds — between Wednesday, Nov. 26, and Sunday Nov. 30. Thanksgiving is its second busiest night of the year, it says, after Mother’s Day.

More chains are offering Thanksgiving-themed menu items further beyond the holiday. Green Leaf’s Harvest Panini is available from mid-October through the end of the year. The 38-unit chain’s sandwich has sliced smoked turkey, cranberry sauce, Cheddar cheese, sage aïoli and herb stuffing, and is served warm from a panini press. It is priced at $6.99-$7.89, depending on the location.

McAlister’s Deli, the 321-unit chain based in Alpharetta, Ga., offers a Turkey Cranberry Griller and a Turkey Cranberry Salad from mid-October through Dec. 28. The griller is Butterball smoked turkey, Gorgonzola, cranberry compote and sliced Granny Smith apple, served on ciabatta and priced at $7.99 at corporate locations. The salad has the same turkey with dried cranberries, candied pecans, Gorgonzola, sliced apples, grapes and cranberry-pecan vinaigrette, also priced at $7.99.

Others reference Thanksgiving more directly. Bad Daddy’s Burger Bar, a 10-unit chain based in Charlotte, N.C., offers a Lucky Pilgrim burger, a turkey patty topped with brie, sausage stuffing and cranberry spread, served on a brioche bun with a side of turkey gravy. The sandwich is priced at $10.95, and is available from Nov. 10 through Nov. 26.

Red Robin Gourmet Burgers has added a Thanksgiving burger to its menu. The Holiday Turkey Burger is topped with sweet potato fries, bacon, green leaf lettuce, mayonnaise and apple-cranberry relish, served on a whole grain toasted bun. The item is priced at around $10.49, depending on the location. It is available at the Greenwood Village, Colo.-based chain’s 477 locations through Jan. 4.

Two-unit Crushed Red Urban Bake & Chop Shop, with locations in Clayton and Kirkland, Mo., offers The Urban Harvest Pizza during the holiday season. Introduced last year, the pizza is topped with candied walnut pesto, roasted turkey, bacon, roasted corn, dried cranberries, mozzarella and stuffing. The item is available through the end of the year, and priced at $7.50 for a single-serving pizza.

Pizzetteria Brunetti, an independent restaurant in New York City, has also introduced a holiday pizza, with goat cheese, roasted sliced pumpkin, organic turkey sausage, sage and Brussels sprouts. After it’s baked, it is drizzled with a cranberry, apple and pearl onion compote. The item has proven so popular that a spokeswoman said it’s destined to be an annual tradition for the restaurant. The pizza is priced at $20 for a 12-inch pie.

Turducken — turkey stuffed with duck stuffed with chicken — has become a new Thanksgiving favorite, particularly in the South, and is appearing at some chains, too. Dog Haus has debuted a Turducken Sausage at its five Southern California locations. The sausage is made with smoked turkey, chicken and duck; sage; rosemary; thyme; whiskey-soaked cranberries and yams. The item is topped with apple-cranberry mostarda, sweet potato tots and sausage gravy, and served on a grilled King’s Hawaiian roll. It is priced at around $7.50.

Burger 21, a 14-unit chain owned by Tampa, Fla.-based Melting Pot Restaurants Inc., plans to roll out a Turducken Burger Friday. Made in-house, the burger consists of ground turkey mixed with Dijon mustard and chives, surrounding ground honey-sage duck, around ground chicken with rosemary. The item is served on a bun with brie and cherry-cranberry chutney. It is priced at $6.99-$8.99, depending on the location.

Correction: Nov. 18, 2014  An earlier version of this article misstated the number of Bad Daddy’s Burger Bar locations. The company is a 10-unit chain based in Charlotte, N.C.