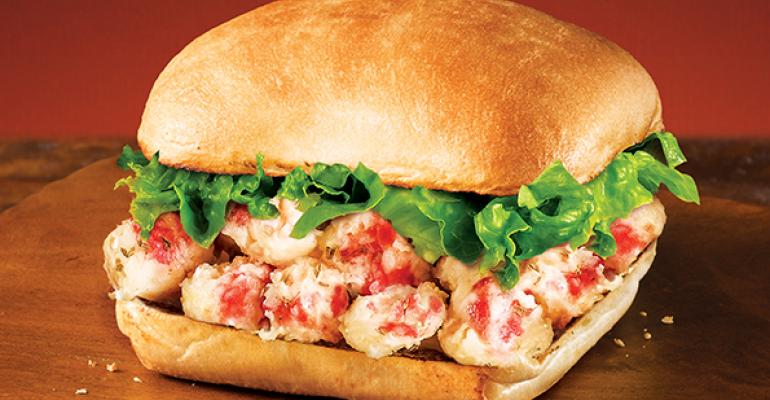 Premiumization is one of the most reliable tricks of the trade

Premiumization, or the use of upscale ingredients in foods and beverages, is one of the most reliable tricks of the trade employed by menu planners. A classy ingredient can differentiate, add value and bring traffic through the front door, and restaurateurs throughout the food chain, from casual to quick service, have taken very similar approaches to upmarket touches.

Premium proteins. The center of the plate is the center of attention when it comes to culinary upgrades, and chefs have been working overtime to enhance the entrée. Lobster represents the top of the seafood pyramid and remains a highly reliable customer draw. Proof of its enduring appeal is Red Lobster’s long-running Lobsterfest promotion, inaugurated this year on Feb. 2. The menu featured nine crustacean-centric dishes like Dueling Lobster Tails, comprising one lobster tail stuffed with crab and other seafood and a second topped with creamy roasted-garlic shrimp. Other specials included Lobster Scampi Linguini and Roasted Maine Lobster Bake. The success of this annual lobster-palooza has doubtless encouraged other operators to follow suit. Lobster Flatbread at Bonefish Grill is topped with mozzarella cheese, fire-roasted peppers and lobster-infused sour cream. Gordon Biersch Brewery Restaurants expanded the line of chef-driven entrées with Lobster & Shrimp Mac ‘n Cheese, in which sautéed lobster and shrimp are tossed in Parmesan-Havarti sauce and bowtie pasta. Limited-service restaurants are on board, too, as with Quiznos Lobster and Seafood Salad Ciabatta Sandwich and Rubio’s Langostino Lobster Enchiladas and Burritos.

The winter menu at high-end steak specialist Smith & Wollensky boasts Long Bone Ribeye, which is dry aged and brushed with bone-marrow butter, while Del Frisco’s Double Eagle Steak Houses offer a 32-ounce Wagyu Longbone, which is another name for ribeye. Although this particular cut might be considered out of reach for limited-service operators, Schlotzsky’s has taken the bull by the horns with its hand-carved Ribeye Steak Flatbread topped with andouille cream sauce. Many others have turned to steak. Taco Bell appeals to carnivores with Triple Stack Steak on bolillo flatbread, and Ryan’s and sibling chains Old Country Buffet and HomeTown Buffet ran a Steaktastic promotion with options like Rancher’s Select Sirloin with Potatoes au Gratin.

There are lots of other upscale briny or beefy delights to be found on menus, like Newk’s Eateries’ gourmet-inspired items featuring sushi-grade ahi tuna. Ahi tuna steaks are marinated, rolled in sesame seeds and seared medium rare before being sliced for use in a sandwich or a salad.

Carl’s Jr. takes a different tack with the All-Natural Burger, a grass-fed, free-range patty topped with natural Cheddar and vine-ripened tomatoes and served on a freshly baked bun.

Champagne has bubbled up on menus, too. LongHorn Steakhouse’s Champagne Lobster Filet was finished with a Champagne Hollandaise, while Denny’s new unit in Manhattan offers a Grand Cru Slam, in which $300 buys two signature Grand Slam breakfast entrées washed down by a bottle of Dom Pérignon. Krispy Kreme laid claim to the world’s most expensive doughnut, which was filled with Dom Pérignon jelly and a little Château d’Yquem cream thrown in for good measure. Worth somewhere north of $1,500, the confection was created to aid a children’s charity in the United Kingdom and was served atop a special cocktail made from 500-year-old Cognac and more Dom Pérignon.