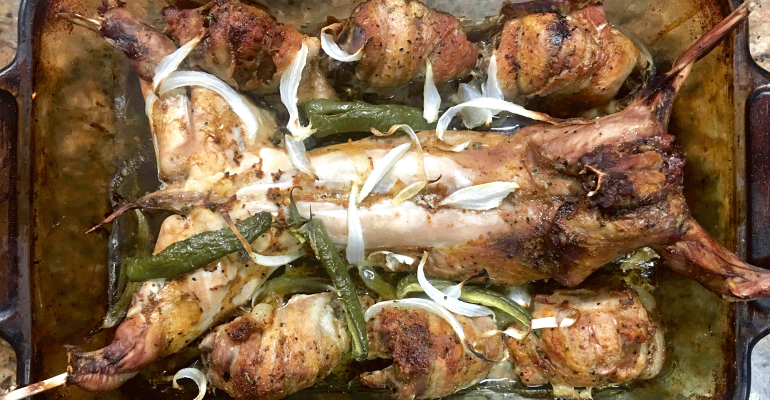 No question about it, rabbit gives a whole new meaning to the cliché about mystery meat, except the mystery here is why we’re not eating more of it.

A highly nutritious and versatile protein that is easy and inexpensive to produce, rabbit is widely consumed in other countries, but largely missing from the center of the plate in this one. Some culinary historians suggest that our identification of bunnies as pets and our fondness for Bugs Bunny, that wascally wabbit turned cultural icon, have been major obstacles. (But we are also fond of Bugs’ halting, hapless object of torment, Porky Pig, and that hasn’t stopped us from devouring every last bit of bacon we can get our hands on.) Other analysts contend that the lack of an infrastructure to support a commercial rabbit industry is what is really to blame for its absence from our kitchens.

Whatever the reason, the tide may slowly be turning. A few years back, The Chicago Tribune declared that rabbit is the emerging hot commodity in the sustainable meat trend, Modern Farmer magazine proposed that rabbit is the new super meat, and both pointed to its embrace by high-profile restaurants like The French Laundry and Chez Panisse.

Italian diners love coniglio (rabbit) alone or with pasta. Piccolo Sogno in Chicago dishes up Coniglio alla Cacciatora, a comforting combination of hunter-style braised rabbit with tomatoes, peppers, olives, mushrooms and sofritto over soft semolina. At Babbo in New York City, rabbit is a main course, plated with market beans, housemade pancetta and carrot vinaigrette, while at newly opened Donetto in Atlanta, crispy fried rabbit is served á la carte with assorted dipping sauces. Patrons at Bar La Grassa in Minneapolis can order half or full portions of cavatelli with braised rabbit, and at Perbacco in San Francisco, they can choose Devil’s Gulch Rabbit, named for the ranch that supplies the meat, which is cooked with spiced red wine sauce, polenta and cavolo nero, or Tuscan kale.

It’s an international protein of choice. Rabbit’s versatility shines at Llama Inn in Brooklyn, N.Y., which created a nifty rabbit potpie made with rabbit leg meat, rabbit sausage and rabbit liver mousse, and at Kuneho, an Asian-inflected operation in Austin, Texas, which offers roti canai with rabbit curry.

Fat Rice in Chicago celebrates the gastronomy of Macau with specialties like Coelho a Bulhao Pato, stir-fried rabbit with guanciale, fava beans, mint and peas, a reflection of the Portuguese who formerly colonized the Chinese island. Bâtard, a modern European restaurant in New York City, pays homage to the French seafood classic with an unexpected rabbit bouillabaise.

El Five in Denver, which specializes in tapas from Gibraltar and the Middle East, also promotes shareables like Valencian paella with rabbit confit, smoked sausage, wild rice, mustard crema and saffron. And while Chumley’s is an American eatery in New York City, its Rabbit in the Hole with peas and carrots is a nod to the traditional English toad in the hole, in which sausage is baked in Yorkshire pudding batter.

Chefs in New Orleans really romance rabbit. They love to give time-honored treatments a twist, as with Mississippi rabbit roulade and fried leg with Pecorino Romano cheese and Marsala sauce at Bayona, or the Absinthe-braised rabbit “carbonara” appetizer with housemade pancetta and a soft-poached egg at Commander’s Palace. “Panéed” proteins are typically coated in bread crumbs, but at Brigtsen’s, the Panéed Rabbit entrée comes with a sesame crust and Creole mustard sauce. Brigtsen’s appetizer menu also boasts Rabbit tenderloin with andouille-Parmesan grits cake.

Rabbit is mostly missing in action on chain menus. One notable exception is the Rattlesnake Stew at Zoup! that included rabbit-and-rattlesnake sausage, peppers, brown rice and spices. And Tocabe, a pair of Native-American restaurants in Denver with chain aspirations, ran a special last summer in which rabbit was braised for three hours in homemade corn stock, New Mexican chiles and fresh sage leaves.