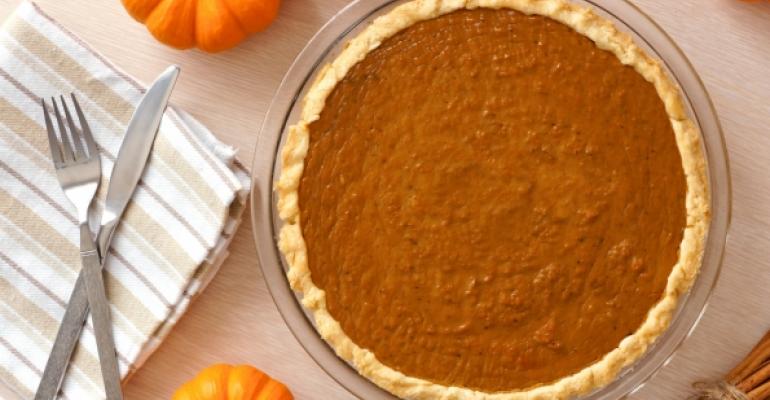 Pumpkin spice: A force for good or an overdone scourge?

Nancy, are you tired of pumpkin spice? A lot of trend watchers are. Publicists, too. They keep emailing me to tell me that pumpkins in general and pumpkin spice in particular are “over.”

That’s only true if they mean that they’re all over the place.

Of course there are all the pumpkin spice lattes, available at virtually every coffee chain because they saw the runaway success of Starbucks’ now-iconic version of the drink.

Some of those items contain actual pumpkin, although I don’t see any reason for that. Although Panera Bread’s Pumpkin Spice Latte has always had pumpkin purée in it (they made a big point of promoting that fact this year), Starbucks’ didn’t until this year, when consumer activists who apparently lack elementary reading comprehension skills shamed them into it.

As you know, pumpkin spice is the spice blend generally used on pumpkins, especially in pumpkin pie, including things like cinnamon, nutmeg, cloves and allspice. Assuming pumpkin spice latte has pumpkin in it is like assuming that Chinese-American duck sauce has duck in it. It’s supposed to be eaten with duck, not made of duck. Do the same activists assume that barbecue sauce is barbecued?

Who wants pumpkin in their coffee anyway, Nancy? What would you do if someone threatened to put any other type of squash in your coffee?

There are plenty of dishes where pumpkin is taking center stage this year: pumpkin bagels, pumpkin pie milkshakes and pumpkin cheesecakes abound. The only thing I’m not seeing much of is straight-up pumpkin pie.

Of course just about every brewery, large and small, comes out with a pumpkin beer at this time of year.

And I think that’s a good thing. Sure, it might get tedious to write about, but if you get tired of eating or drinking pumpkin-oriented things in restaurants at this time of year, you can order something else.

But the creation in recent years of this pumpkin spice season does, I think, instill in people the idea that the same things don’t have to be eaten all the time. It let’s us know that produce comes in and out of season and, in a small way, I think that can help remind us that food comes from someplace — generally from farms, which grow things in the ground.

Hear Thorn reflect on an experience with food seasonality in Japan:

Of course the spices themselves aren’t seasonal. Pumpkin spices come from tropical plants, and we use them dried. They’re available all year long. But their association with the season is a helpful reminder that food is made of agricultural products.

And now other harvest-oriented items are being celebrated in the fall. Pancheros Mexican Grill, a fast-casual chain based in Coralville, Iowa, has introduced a Harvest Sweet Potato Mash that can be spread on burritos, tacos and quesadillas and added to salads and burrito bowls free of charge through December. It’s made of mashed sweet potatoes with nutmeg and allspice.

And you know all that pumpkin beer? I was talking to chef Todd Kelly of the Orchids at Palm Court in Cincinnati, who brews his own beer for the restaurant. He said he’s currently working on an apple one, for which he added apple butter, spiked with the North African spice blend ras el-hanout, to barley, wheat and malt as the base of his beer.

Pumpkin season isn’t the only food-related time of year, although it’s the most pronounced. Practically every independent restaurant seems to have some version of strawberry rhubarb pie in the spring, and peach and other stone fruits are becoming an increasingly prominent hallmark of the summer.

Of course this has been going on for a while, but I still remember when one of the only seasonal items on menus was McDonald’s Shamrock Shake.

What do you think, Nancy; am I giving too much credit to pumpkin and its accompanying spices for raising awareness of seasonality? Are they a force for good in the changing food scene or have the jumped the proverbial shark?

Actually, I think the answer to your questions regarding both seasonality and sharks is yes.  But before I get to that, may I vent a little? Pumpkin season, which used to be the province of Halloween and Thanksgiving, starts earlier and earlier each year. It’s like Christmas: The dust barely settles before another one is upon us. Your Menu Tracker announced the arrival of a whole slew of pumpkin specialties from Dairy Queen, Dunkin’ Donuts, Einstein Bros. Bagels, Caribou Coffee and more before Labor Day. It’s enough to bring out my inner Grinch — or the autumnal equivalent of that cranky Christmas character. This isn’t right, Bret; pumpkin just isn’t meant to be consumed when we’re still running around in shorts and flip flops.

Hear Kruse and Thorn weigh which wines pair well with pumpkin spice — and whether it matters:

Venting aside, you raise a couple of good questions. First, has the annual reappearance of pumpkin-flavored and spiced foods heightened general awareness of the fact that to every food there is a season? I suspect that it has, despite the fact that the season keeps getting longer. If any single entity deserves credit, it’s Starbucks. You note that their Pumpkin Spice Latte is a recurring limited time offer and annual rite of fall, but did you know that the company reports it is their most successful seasonal beverage of all time? And it has spawned all kinds of over-the-top imitators and culinary contortions, my favorite of which is the Pumpkin Spice Latte Burger from the ever-innovative folks at Umami Burger. Piled high with pumpkin slices, it also sports a tasty coffee-molasses drizzle.

Besides its positive seasonal association, I have a sneaky suspicion that pumpkin consumption may receive a bit of a boost because people aren’t aware of what they’re eating. You and I know that pumpkin is a fruit, but I have a hunch that most consumers think of it as a vegetable.  I bet pumpkin-loving consumers feel altogether virtuous and put a tick mark in the veggie column with each pumpkin- flavored goodie they scarf down.

Has pumpkin jumped the shark? Oh boy, has it ever. The Washington Post poses the rhetorical question “has America reached peak pumpkin?” and  reports that in the 12 years since Starbucks poured its first Pumpkin Spice Latte, the humble squash has become a marketing force to be reckoned with. The paper pegs the total pumpkin market at grocery stores at $360 million and counting, with growth jumping a whopping 80% since 2011. Market researcher Nielsen reports that not only are consumers spending more per household, but they’re also buying a much broader range of pumpkin-inflected products. Like what, you ask? Well, there’s pumpkin-flavored dog food, sales of which reached $12 million last year, and then there’s pumpkin-flavored tobacco, vodka, soda, soy milk, tortilla chips, cat food and much more. The sharks are definitely circling.

By the way, the Washington Post specifically cites restaurants as a driving force behind pumpkin mania, noting that “gourmet chefs” use it as an “earthy accouterment” in soups and risottos and states that one in 10 restaurants now have pumpkin somewhere on the menu.

So I say bring on the pumpkin, which is every red-blooded American’s favorite fruit-cum-vegetable this time of year. Just don’t get too attached to it. As I write this on October 22, I hear jingle bells tinkling in the background, which means that very soon, Bret, you’ll be Menu Tracking the pepperminted tastes of Christmas.