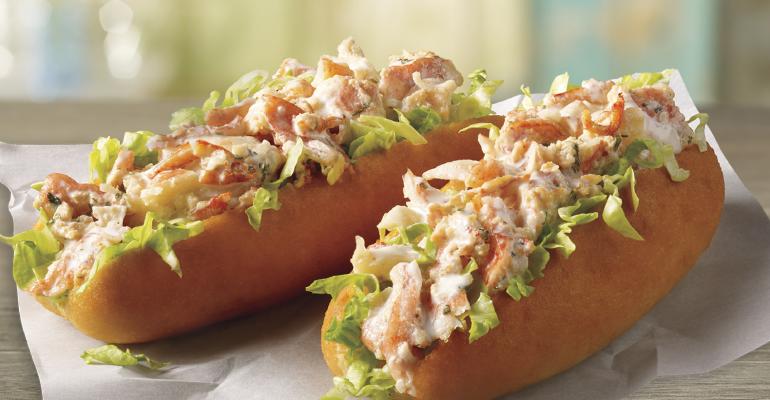 In the face of escalating food and labor costs, more foodservice operators have recalibrated their promotion strategies: focusing on premium items that command higher menu prices and profit margins. Restaurant patrons, many of whom have seen their savings accounts increase thanks to COVID relief stimulus checks and months-long quarantines that squelched normal spending, are responding with enthusiasm to a creative range of upmarket fare.

Premium proteins. Nothing signifies indulgence like lobster — the coveted crustacean that represents the essence of luxury dining — and recently, chains of all levels are jumping on board. At Captain D’s, lobster rolls have been a popular limited-time special for the past several years. Often paired with promotional lobster bites or lobster bisque, they provide diners a double dose of briny pleasure. Rubio’s has lured patrons with a lobster burrito special, and Fazoli’s made a splash with its new Lobster Mac & Cheese that adds a bit of glamour to the chain’s autumn menu.

Not all upmarket proteins are of the aquatic variety, however. Prime rib has made the menu at Denny’s, where the Prime Rib Benny Breakfast includes potato cakes, over-medium eggs, and Hollandaise sauce. For later in the day, Toppers Pizza tops the Wisconsin Cheesesteak Pizza with Wisconsin mozzarella and sliced prime rib, while Freebirds World Burrito invites guests to create the ultimate Prime Rib Texas Queso Steak Experience through this holiday season.

Related: How produce-centric plates are getting a pandemic-era makeover

Truffle mania. The emergence of the domestic truffle industry has helped propel the appearance of the coveted fungus on chain menus, as truffle-infused condiments have been popping up all over. True Food Kitchen recently launched a truffle honey and pear flatbread. First Watch features a seasonal truffle mushroom hash that combines shiitake and crimini mushrooms with bacon, Monterey Jack cheese and seasoned potatoes topped with two eggs, lemon-dressed arugula, Parmesan cream sauce and truffle oil.

Burger specialist Slater’s 50/50 tops premium burgers with truffle cheese, and Shake Shack is offering a black truffle menu for a limited time comprised of a black truffle burger and parmesan-garlic fries, both topped with black truffle sauce. Truffle connoisseurs who prefer their truffles white had cause for celebration thanks to Buffalo Wild Wings’ Truffalo sauce: a winter special that added white truffles to the signature wing sauce.

Gold rush. Arguably the last word in culinary indulgence are gold-plated dishes, or more succinctly, items coated in edible 24-karat gold leaf. The practice goes back to ancient Egypt and China, where the consumption of gold was believed to curry favor with the gods. Current usage is decidedly more secular, as at newly opened Steak Market in Atlanta, which offers gilded items like the World’s Biggest Wing, a 24-karat-coated full ostrich drumstick. Less exotic, perhaps, but equally head turning is Slater’s 50/50’s 24-k Burger that glitzes up the permanent menu at the chain’s Las Vegas outpost. Here a brioche bun and thick-cut bacon are dusted in 24-karat gold and placed on a Wagyu beef patty that’s topped with truffle cheese. The item constitutes a kind of premium trifecta and proves that for today’s diners, nothing succeeds like excess.

Nancy Kruse, President of the Kruse Company, is a menu trends analyst based in Atlanta. As one of Linked In’s Top 100 Influencers in the US, she blogs regularly on food-related subjects on the Linked In website