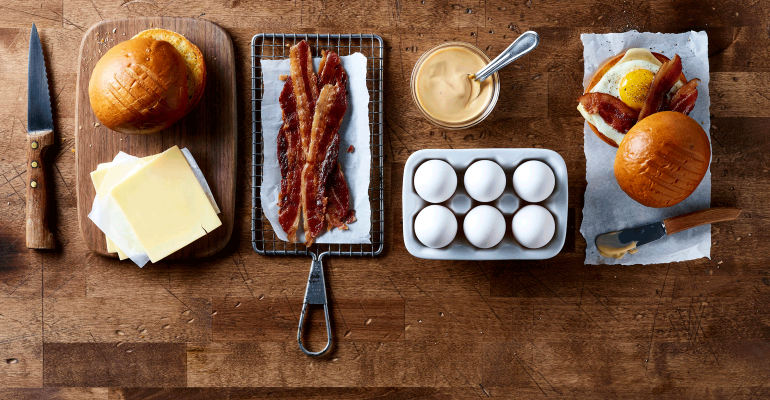 As part of the debut, the St. Louis-based fast-casual chain said it has petitioned the Food and Drug Administration to establish a clear definition of the term “egg.”

“In developing its newest breakfast sandwiches, Panera discovered that current FDA regulations do not establish a definition or a standard of identity for eggs,” the company said in a press release. “Without this, companies can sell and advertise items that contain multiple additives, such as butter-type flavors, gums and added color, under the generic term ‘egg.’”

Panera said its own survey found that half of its top 10 competitors served “eggs” that included five ingredients or more.

“Responsible companies will be transparent about the food items they serve, even if regulation does not require them to do so,” said Blaine Hurst, Panera’s president and CEO, in a statement. “At Panera, we believe 100-percent real eggs are the basis for a great breakfast sandwich,” he added.

Panera said its breakfast sandwiches use cracked-shell eggs or egg whites with no additives.

“Brands can say they offer an egg sandwich but sell an egg product that contains multiple additives,” said Sara Burnett, Panera’s director of wellness and food policy. “At Panera, consumers can be assured that when they order eggs, that’s exactly what they’re getting.”

Panera said its new breakfast sandwiches feature cooked-to-order eggs on brioche buns with Vermont white cheddar cheese and thick-cut bacon. The sandwiches can be customized with egg whites, spinach, avocado and sauces such as sweet maple or chipotle mayonnaise.

The chain debuted the sandwiches on Friday with a free daylong sampling event at a pop-up restaurant in New York City. It touted the social media hashtag #RespectTheEgg.

Hey NYC fans! Visit us at our pop up shop today at 67 Greene Street in SoHo to celebrate our new Bacon, Egg & Cheese (with an over easy egg!). We’ll be here until 7 PM… or until we run out of sandwiches. #RespectTheEgg pic.twitter.com/ABjyB7EbiG