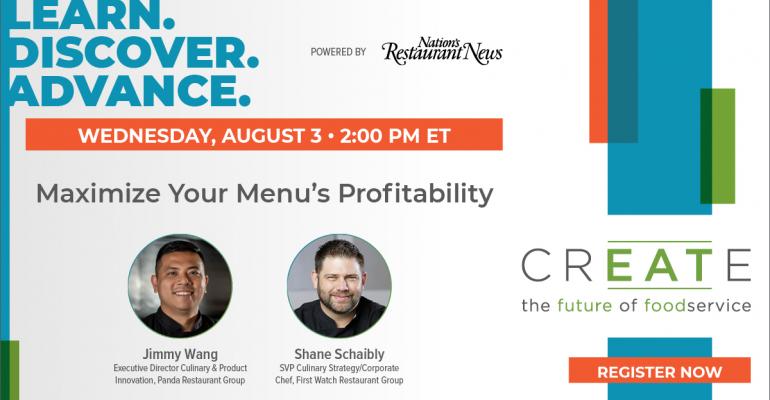 Chain research & development experts provide a glimpse of their processes

You might be able to get boba tea at Panda Express in the not-too-distant future and First Watch has plans for cauliflower al pastor tacos early next year, according to the heads of product development at those chains.

In a session on “Maximizing your menu’s profitability” that’s part of Nation’s Restaurant News’ online CREATE educational series, Shane Schaibly, senior vice president of culinary strategy and corporate chef at First Watch, a family-dining chain that serves breakfast, brunch and lunch, cited the new tacos as an example of a limited-time offer that tests out new categories and allows the restaurant to make a statement, which means profit isn’t necessarily the primary motive for an item like that.

“We don’t expect it to break any PMIX records, but that’s an exciting dish,” he said. “It’s talking about plant-based foods that grow in the ground,” letting the chain push the envelope in terms of what it offers and also allowing it to contribute to the ongoing conversation about plant-based items.

“We are actually launching our Panda house-made beverages so we can pair [them] with our current food, and people may get very excited about it,” he said, adding that consumer research indicated that Panda could do will with exotic fruit flavors, as well as tea, which is growing in popularity and ties in well to the chain’s Chinese-American heritage, since tea originated in China.

“People are starting to grow out of the soda station,” he said. “So what’s the next opportunity that people can say, ‘Hey, I want to buy this because it looks refreshing, it looks colorful, it looks delicious and it works with the food.”

When asked if guests might soon be able to order boba tea with Panda Express’s beloved Orange Chicken, he said, “We’re working on it.”

The chefs shared insights into the importance of working with their companies’ supply-chain teams while also reflecting on what works in menu development and what doesn’t.

Both agreed that they have to work with two categories of customer: Their own operations teams and the consumers who are going to buy the food.

Wang said any new menu item has to be easy for the people in restaurants to prepare and serve well, and customers need to be excited to see it.

“And of course we are a business, so we have to think about sales results,” Wang said.

Schaibly said that over the years he has learned what categories of food perform well as limited-time offers, such as hashes — one of which, a sous-vide cooked, hand-pulled corned beef hash that’s launching in the fall — and French toast. Although he added that one item that he thought was going to be a big hit, s’mores French Toast, didn’t work.

“That was the first one that we created, tested and it was a complete flop … that stung a little bit,” he said.

Wang had a similar experience with the test of Szechuan Hot Chicken, which was chicken strips dipped in a spicy seasoning oil with Szechuan peppercorns — the first national rollout using that spice — that piggybacked on the Nashville hot chicken craze.

He said the item had “a little bit of tingling, a little bit of numbing [from the Szechuan peppercorns] on top of those typical hot spices you get from the South. We thought it was going to be a homerun!”

But it turned out that customers weren’t quite ready for that.

The test wasn’t a total loss, however.

“We also learned something very big, which is that our consumer doesn’t like to take a bite of something and then put it down,” when eating at Panda, he said. “Everything else on our menu is one bite at a time.”

Schaibly said that sometimes a menu item simply needs a different name, like when First Watch tested the Middle Eastern dish shakshuka, a dish of eggs cooked in a spicy tomatoey stew, a few years ago. After testing it and finding out that the name didn’t resonate with the chain’s guests, “we ended up rolling it out as Mediterranean Baked Eggs, and it did quite well.”

You can view the entire conversation on the CREATE website.