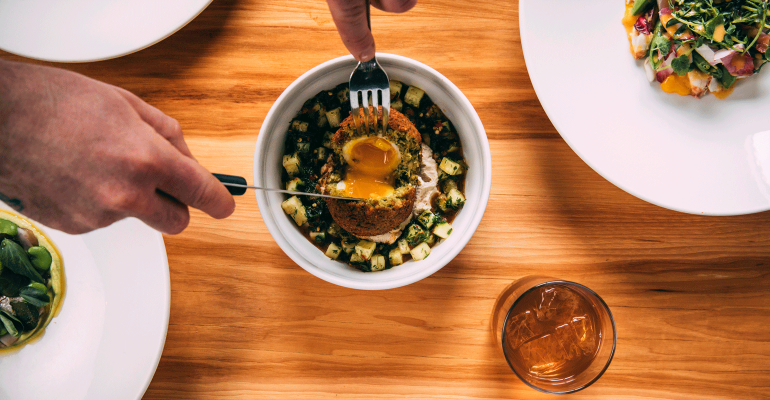 Operators riff on the Scotch Egg

A recent article in Britain-based The Guardian queried plaintively “Does Brexit Mean Breggxit for the Humble Scotch Egg?” and lamented that a no-deal departure from the European Union, which will prohibit carrying animal products to the continent, would effectively ban Brits from taking their favorite nosh abroad.

This looming gastro crisis brings into question one of the enduring mysteries of the British kitchen, which is how the Scotch egg got its name. While its various origin stories agree on very little, they are in accord regarding its emergence in England around the 18th century. Immediately popular at pubs and on picnics, it consisted of an egg encased in sausage meat and coated in breadcrumbs. Although the basic recipe has changed little in the past several hundred years, there has been room for interpretation relative to whether the egg in question is soft boiled or hard, whether it has been fried or baked, and whether it is served hot or cold, options that can serve as a jumping-off point for contemporary chefs.

Conventional approaches. Many operators, especially those at the host of updated British pubs operating on these shores, hew closely to the classic, rejiggering little except, perhaps, the condiments with which it’s served. At Owen & Engine in Chicago, the house version is a soft-boiled egg with a side of stout mustard, and at The Fat Radish in New York City, it’s served with seeded mustard and cornichons. Highlands in New York City dresses the plate with house pickles and HP sauce, the beloved British brown sauce made of tomatoes spiked with vinegar.

English-oriented operations aren’t the only ones to take a crack at the traditional egg snack. River Roast Social House touts its American-tavern fare in Chicago and offers its option with pickled mustard seed, while King Street Dispensary and Bourbon Bar in Charleston, S.C., pays homage to historic South Carolina liquor dispensaries, touts its selection of beer and booze and selects creole mustard to accompany its Scotch Egg.

Creative interpretations. Other chefs, however, seem to view the basic recipe less as a mandate and more as an invitation to innovate. In Boston, Outlook Kitchen & Bar has featured an upmarket variation made with duck confit instead of sausage, and in Chicago, Longman & Eagle dishes up a popular, vegetarian Falafel Scotch Egg, in which chickpea subs for sausage. Baran’s 2239 in Los Angeles has garnered rave reviews for its Indian Egg, with lamb sausage standing in for the traditional pork, served with a side of curry jus and a cooling cucumber salad. It is a first cousin to the spicy Indian nargisi kebab, which some food historians posit as the true inspiration for the pub standard. 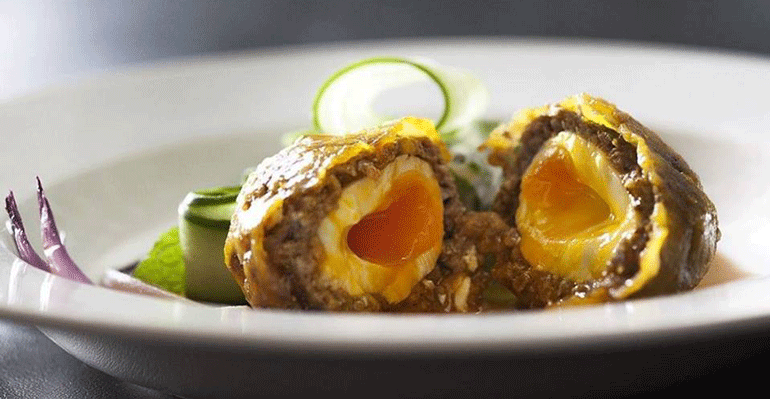 Some restaurateurs look closer to home for inspiration, as with the bar bites at Decca in Louisville, Ky. which are made with pickled egg, a hard-boiled staple at gas stations and truck stops, taverns and bars throughout the region; or the tasty take at Harold’s Cabin in Charleston that featured minced turkey.  A couple of years ago, noted chefs Dominique Ansel and Dan Barber collaborated on a limited-time Scotch Egg Roulette special, so named because customers wouldn’t find out whether the egg yolk in their selection was red or yellow until they took the first bite. The color was determined by what the chicken was fed, and in practice, only one of every few dozen was actually bright red. Either way, the item was plated with fresh baby corn still in the husk, and a bit of corn mustard.

Culinary crossbreeds. There are enterprising chefs who have created a kind of hybrid by imbuing deviled eggs with unexpected crunchiness, as with the Deep-fried Deviled Eggs at Julep in Houston that came crowned with whitefish caviar and truffle salt. Battered and fried Crispy Deviled Eggs at Bidwell in Washington, D.C., are offered with jalapeños and buttermilk ranch dressing, and the Crispy Deviled Eggs on the fall-winter menu at 30-unit Lazy Dog Restaurant & Bar, based in Costa Mesa, Calif., were finished with smoked paprika and candied bacon.

A different take on crunch eschews frying altogether in favor of munchable toppings like Bacon-Kimchi Deviled Eggs at Son’s Addition in San Francisco, which are coated in black sesame seed. And at Bambara in Salt Lake City, the Utah Smoked Trout Deviled Eggs are topped with trout caviar, beet crisp and pickled carrot ribbon.

Nancy Kruse, President of the Kruse Company, is a menu trends analyst based in Atlanta. As one of Linked In’s Top 100 Influencers in the US, she blogs regularly on food-related subjects on the LinkedIn website.