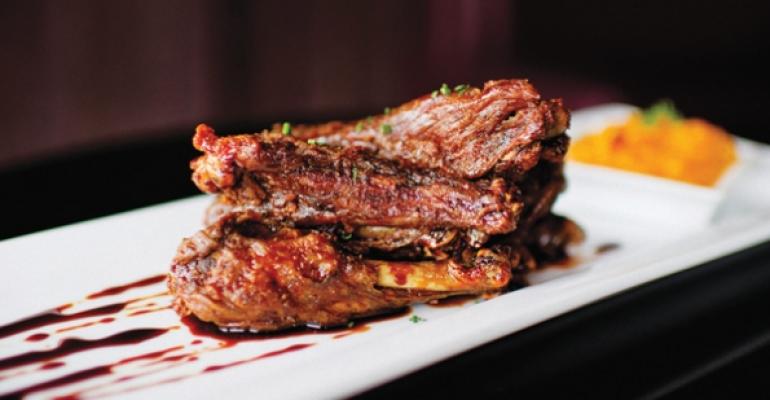 Chicken wings, once unwanted appendages that were either sold overseas or used in stock or animal feed, are now the most popular appetizers in the country.

That has proven to be a problem for restaurateurs as wing prices have skyrocketed. Over the past year, unprocessed wings have actually cost more than the boneless, skinless chicken breast that ordinarily is the prime part of the bird.

Kate Malaniak, senior director of food and beverage at 58-unit Quaker Steak & Lube, whose wings and signature sauces are its menu’s cornerstone, said she spent 2012 working to convince customers to buy something else.

“The whole year was all based on: What can we do to offset chicken wings? It has totally consumed every minute of my time,” she said.

Although wing prices have come down in recent weeks from the more than $2 per pound they reached around the Super Bowl — the day of highest wing consumption, accounting for nearly 5 percent of all the wings eaten during the year, according to the National Chicken Council — they remain challengingly expensive for restaurateurs and are likely to remain so. Chicken wings are not only the most popular appetizers on restaurant menus, but they’re also the fastest growing. Chicken-wing sales grew by 10.7 percent in 2012, according to research firm GuestMetrics, which analyzes point-of-sale data.

Some chains, watching margins shrink as they’ve bought wings by the pound and sold them by the piece, have responded by changing their pricing strategy. Buffalo Wild Wings, for example, recently announced it was testing a portion system based on weight rather than number of wings at 64 of its 813 domestic units.

Other chains have turned to “boneless wings” made from breast meat, which some trend watchers say have more appeal for women and, according to GuestMetrics, now account for 14 percent of wing sales and were responsible for 81 percent of the growth in wing sales in 2012.

Buffalo Wild Wings and most other wing-focused chains offer boneless options, and Hooters is currently promoting them with the return of its Wingsday Wednesday promotion, which offers 10 boneless wings and fries for $6.99 at all of its 369 units.

The benefits of boneless

Malaniak said she added boneless wings to Quaker Steak’s menu more than two years ago, when many casual-dining chains were adding them.

And from a purchasing perspective, chicken-breast prices tend to be fairly stable.

“We’ve been kind of focused on [boneless wings] for two years, but we really had to accelerate promoting and menuing them this past year,” because of the high price of wings, she said.

Currently on the menu as a limited-time offer through April 16 are Breaded Boneless Double Dippin wings served with customers’ choice of four sauces, along with celery or carrots with blue cheese or ranch dip for $10.99 for a 1-pound order.

Joe Sciortino, vice president of purchasing for 34-unit Wild Wing Café, based in Charleston, S.C., is currently researching boneless wings to add to the menu in May.

He said the chain’s regular wings make up between 40 percent and 60 percent of total food sales, depending on the location, and boneless wings would both offset the high price of actual wings and give people an option for parties and other social events for which they might not want to get sauce on their hands.

“They’re a lot easier to eat if you’re among a crowd or at catering events or doing something other than [just] eating,” he said.

Some independent restaurants have found success with duck wings, which are generally regarded the way chicken wings once were and priced accordingly.

Although duck wings tend to dry out and toughen when cooked with the whole bird, chefs are finding a ready market of customers already trained to eat chicken wings who are game to give duck wings a try.

Greg Boschetti, chef of Temple Bar in Cambridge, Mass., separates the two largest joints of a duck wing and slowly cooks them in duck fat for about 3.5 hours. Then, when they’re ordered, he deep fries them at about 350 degrees Fahrenheit.

He serves them in a bowl drizzled with a lime-spiked sweetened soy-sauce reduction. On the side he serves a sauce made of sautéed onions, garlic and pineapple slowly cooked in a reduction of orange juice, apple cider, rice-wine vinegar, chile paste and brown sugar.

“The most expensive part of the dish is the duck fat,” he said.

“They are very, very popular,” he added. “When I first put them on the menu, I was maybe selling a case of duck wings a week, but now I go through three or four cases a week.”

Kevin Johnson, chef at The Grocery in Charleston, S.C., has had a similar experience with his duck wings.

“We have a very popular duck dish that led to a lot of duck wings sitting around. We decided to make use of them.”

He rubs the wings with a mixture of ginger, garlic, chile flakes, coriander, allspice and star anise, confits them in duck fat and stores them in the fat until they’re ordered. Then he deep fries them to crisp up the skin, tosses them in a sweet-and-spicy chile sauce and serves them at the bar for $6 for seven or eight wings.

Stephen Yaeger, general manager of Jones in Philadelphia, said his restaurant uses firm tofu for its Buf-Faux-Lo Tofu Wings. Cut into 3-inch by 1-inch pieces — “They look like Jenga pieces,” Yaeger said — the tofu is coated in rice flour, deep fried at 450 degrees Fahrenheit for between seven and eight minutes, and served with hot sauce emulsified with butter, or without butter if vegans request that, for $9 for nine pieces.

“It’s definitely found its niche,” he said, noting that non-vegetarians order it, too.

Developed by sous chef Kevin LaForest, the skin is cooked in water so the fat renders out. Then the water is allowed to cook off so the skin crisps up in its own fat.

They’re tossed in hot sauce and served with a sauce of Gorgonzola dolce, mayonnaise, lemon juice, parsley, thyme, celery and celery leaves. The dish is $10.

“Our purveyors normally just throw the skin away, so they give it to us at a very reasonable price — even cheaper than chicken bones,” Brandt-Lee said.

Erin O’Shea, chef of Percy Street Barbecue, has found the same thing to be the case with turkey tail, or the part sometimes called the “pope’s nose” that hangs off the back end of the bird.

“Some people look at me like I’m crazy,” she said, “but it’s the part people fight over at Thanksgiving.”

She seasons them with salt and pepper and then smokes them for about two hours at 250 degrees Fahrenheit. She finishes them on her charcoal grill, tosses them in the house barbecue sauce and puts them back on the grill to caramelize the sauce.

She serves six of them in a basket for $7 and currently pays 94 cents per pound for them.

“It’s fun, it’s different, and nobody else has them. So a lot of people identify turkey tails with us and us with turkey tails.”

But for some people, there’s no substitute for chicken wings.

“We have been looking at alternatives since the late fall, knowing the massive price increases were coming,” said Mike Fortas, operator of Midtown Bowl in Atlanta.

“We have yet to find anything that’s a good enough substitute for real, bone-in wings, so we are taking this on the chin.”