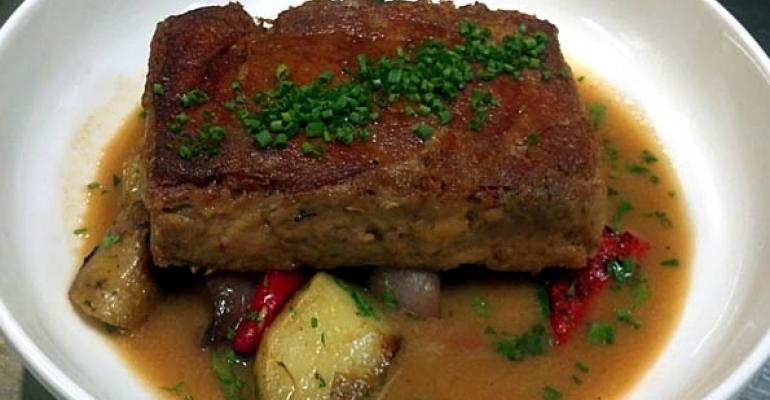 No longer just a special-diet staple, chefs are using it from breakfast to dinner

As consumers continue to seek new but not unfamiliar ingredients, as well as vegetarian and vegan options, a different type of milk is emerging on the scene: nut milk.

Almond milk, which is popular among the juice-cleanse crowd, is leading the charge of these concoctions, which are generally made by pureeing nuts with water and sometimes flavoring, such as vanilla, sugar or trendier sweeteners like agave nectar, and sometimes a little salt. The mixture is strained and the liquid is used in a variety of preparations or drunk straight.

“We use it in the pig sauce,” said Dave Santos, chef of Louro in New York City, referring to his suckling pig with piquillo peppers, charred onion and new potatoes.

He lightly toasts almonds, purees them with salt and carbonated water, and mixes the milk with liquid used to braise the pork.

“The almond milk adds a nuttiness and a creaminess, but in addition, because of the nut starches that thicken when it cooks, it adds a nice viscosity to the sauce without over-reducing,” he said. “The result is a nice, bright, nutty and viscous sauce with all the porky deliciousness.”

Will Foden of 83 ½ in New York City freezes almond milk and almond liqueur to make a granita, a popular Sicilian street dessert.

Gregory Gourdet, chef of Departure in Portland, Ore., serves his strawberry and Asian pear crisp with a side of almond-milk ice cream. “I am a health-focused chef, and people of all dietary distinctions dine at Departure, so it is crucial that we have enough options for everyone,” Gourdet said. “This dessert is vegan and gluten-free, and nut milks are heart-smart and a go-to for the dairy-challenged.”

He added that almonds and strawberries also happen to be delicious together.

Other dessert specialists, such as Brooklyn Farmacy in Brooklyn, N.Y., keep almond milk on hand for the dairy intolerant.

Marcus Antebi, owner of an 11-unit vegan and mostly raw food chain in New York City called Juice Press, pours cashew milk — simply cashews pureed with water — into a blend of raw oatmeal and raw chia seeds for an energy-dense chilled pudding. The fats in the cashew milk congeal better than those in almond milk, he said, and the mild hint of natural sweetness also enhances the dish.

At Todd English’s five-unit Olives chain, based in Charlestown, Mass., almond milk is used instead of regular milk in a breakfast dish of steel-cut oat porridge that also has blueberries and toasted almonds.

Jason McClure of Sazerac in Seattle uses housemade pecan milk to reinforce the flavor of his pecan-bourbon bread pudding. “The process is easy,” he said. “I use any kind of nuts, sweetener [such as honey or agave syrup], and water blended together and then strained through cheesecloth.” He also said he uses nut milk as a lighter substitute for cream in chocolate ganache.

Although nut milks are relatively new to American restaurant menus, they were all the rage in medieval Europe, according to Reay Tannahill, author of “Food in History,” published in 1988 by Crowne Publishing in New York City. “Almond milk had a high nutritional reputation and was poured down the throats of privileged infants in astonishing quantities,” according to the book. Walnut milk was also consumed.