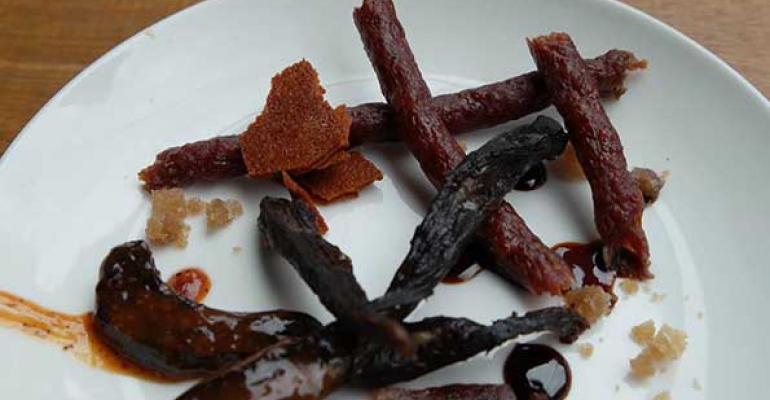 Protein-rich, portable and potentially gluten-free, jerky is an increasingly popular snack in the United States, according to recent data from The NPD Group.

Jerky sales are rising at convenience stores, and some restaurant chefs are experimenting with making their own.

Consumption of meat snacks such as jerky among adults has increased by 18 percent over the past five years, according to NPD. Those snacks are most frequently consumed between lunch and dinner and late at night, NPD found. Adults ages 18-24 are most likely to eat them.

Although beef remains the most popular type of jerky, turkey jerky consumption has more than doubled in the year to April 2015, according to NPD’s SupplyTrack, which tracks products shipped from major broadline distributors to foodservice operators.

“All forms of jerky are hot … but not in restaurants,” restaurant food and consulting firm Baum + Whiteman said in its recent mid-year trend report, noting that sales of jerky and related products “enjoy year-on-year double-digit increases,” particularly in convenience stores.

Jerky is made by seasoning and curing meat, poultry, fish or other proteins. For instance, trout jerky was one of the new items on display at the recent National Restaurant Association show in Chicago. Salt and sugar are usually added as part of the curing process. Soy sauce, which contains wheat, and therefore gluten, is also a common ingredient.

Although most of this snacking is happening outside of restaurants, some chefs are experimenting with making their own jerky.

Warren Baird, chef of Chapter One restaurant in New York City, makes his own beef jerky, marinated in house-made Worcestershire sauce, which he serves as a garnish for duck wings and also for his Bloody Bull cocktail — similar to a Bloody Mary, with beef broth added.

Heather Terhune, chef of the newly opened BDK in San Francisco, also makes her own beef jerky. So does chef Anthony Dominguez of AQ by Acqualina, a resort and spa in Sunny Isles Beach, Fla.

Dominguez said his jerky is made from chuck flap that is marinated for 24 hours in a liquid that includes Worcestershire sauce, jerk seasoning, red pepper flakes and champagne vinegar. He then dehydrates it for eight hours at 175 degrees Fahrenheit. It is served with Parmesan cheese, dried mangoes and dried apples.

The beef jerky is a flank steak that Goodman cures, smokes and then puts in a dehydrator. The andouille and pork curry jerky are simply dehydrated. The Sriracha chip is the popular sauce mixed with xanthan gum and dehydrated. The dehydration process takes at least 24 hours, he said.

Restaurant chains are also offering iterations on jerky. Wayback Burgers, with more than 100 locations, based in Cheshire, Conn., is offering a “Jerky Milkshake” from July 1 though Sept. 30. It combines vanilla bean ice cream with barbecue, maple and hickory flavors, and is served with one or two Slim Jim Snack Sticks, depending on the size.