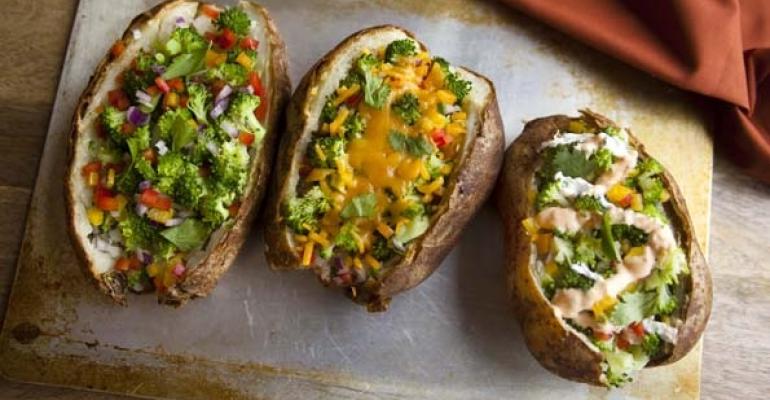 The fast-casual segment has long been a platform for single-item menus, such as burgers, pizza and grilled cheese sandwiches. Potatopia may be the first to specialize in potatoes.

Guests customize their potatoes with vegetables, cheeses, meat and sauces.  Vegetables and herbs such as scallions, cilantro, broccoli, corn, garlic and a seasonal mix are free, along with up to two cheeses. Additional cheeses are 85 cents each. Proteins including chicken, bacon, steak, shrimp and egg range from $1 for an egg to $3.50 for steak.

The finishing touch — sauce — was the inspiration for Potatopia.

“At home I never enjoyed sauce from a bottle. I was making sauces from scratch, and my family started to love the sauces, and that’s how Potatopia came about,” Dikker said.

“I needed something to put my sauces on, and potatoes were a perfect complement,” he said. “I didn’t want to open a full-fledged [full-service] restaurant. I wanted to create a really quick-serve concept.”

Potatopia’s sauces include roasted pepper aïoli, ranch aïoli, truffle aïoli and sour cream. The first sauce is free, and additional ones are 90 cents, except for ketchup.

The average check is around $8. Surprisingly, French fries aren’t the best-selling item.

“Nobody really cares about the French fries,” Dikker said.

Smashed potatoes make up a full 30 percent of sales. Customers can buy them as supplements to meals they purchase at the other food court restaurants.

Formerly in advertising, media and real estate before the economic crisis of 2008, Dikker trained at Princeton, N.J., landmark Hoagie Haven to understand the dynamics of running a high-volume operation.

At the Menlo Park Mall Potatopia, the kitchen includes a double-decker convection oven, fryers, a hybrid convection-microwave oven and a custom-built refrigerated system that dispenses sauce. Dikker vacuum-seals the sauces in bags and stores them in the dispenser, from which he fills squeeze bottles that are used on the line. He also systematized the operations so that he doesn’t need chefs at the restaurant.

“A 17-year-old kid can do it,” Dikker said, noting that the Menlo Park location averages 200 customers per day.

Potatopia opened a second location in New York City about two weeks ago. Customers there seem to approach the potato as a platform for a full meal, he noted. Although smashed potatoes continue to sell well there, the mashed pie and new au gratin potatoes give them a run for their money.

“I knew Potatopia belonged in New York City, but I didn’t want to start here,” Dikker said. “I needed to work the kinks out.”

The Menlo Park kitchen has been reproduced at the larger New York City location, where business is already much more robust than at the suburban food court.

Dikker said business has been steady there throughout the day and is particularly brisk between 7 p.m. and 10 p.m. The restaurant is open until 2 a.m.

Dikker has completed all the necessary paperwork for franchising, although he has no immediate plans to sell franchises. “I’m still fine-tuning it,” he said.