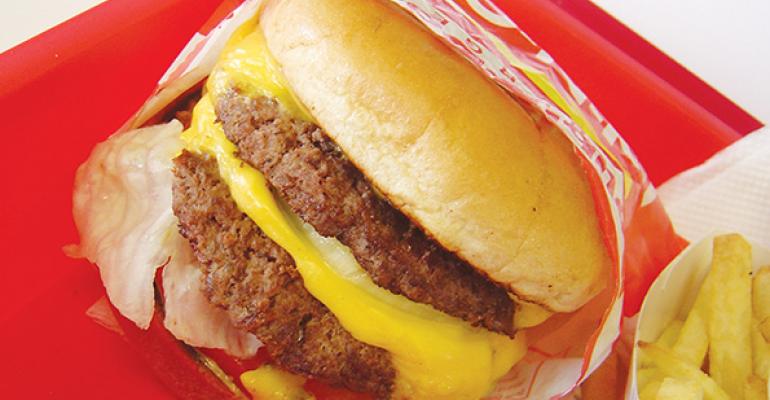 In-N-Out Burger is working with suppliers to accelerate a move away from the use of human antibiotics in the production of beef used in the chain’s burgers, the company said Thursday.

The statement from Irvine, Calif.-based In-N-Out Burger came in response to a campaign by a coalition of environmental and public health groups that has been pressuring a number of restaurant chains to stop using meat raised with low-dose antibiotics. Previous targets have included McDonald’s, KFC, Olive Garden and Subway.

The coalition includes CALPIRG Education Fund, Friends of the Earth, the Center for Food Safety, Consumers Union and blogger/activist Vani Hari, known as Food Babe, among others. The coalition said it has been passing out literature at In-N-Out locations and encouraged social media pressure under the hashtags #InNOutSaveABX and #InNOutBurgers.

Health officials contend that the routine use of antibiotics in livestock has contributed to the rise in antibiotic-resistant bacteria, estimated to kill roughly 23,000 Americans annually. Federal regulations prohibit the use of antibiotics to promote animal growth, but still allow the use of low-dose antibiotics as a means to prevent disease caused by crowded living conditions.

“The public health crisis of antibiotic resistance warrants immediate action from all sectors,” Laura Rogers, deputy director of the Antibiotic Resistance Action Center at George Washington University’s Milken School of Public Health, said in a statement. “While the U.S. government has taken some action, it is not enough. We need companies like In-N-Out Burger to harness their purchasing power and demand that the meat they serve is raised with responsible antibiotic use.”

Keith Brazeau, In-N-Out Burger vice president of quality, said the company has been working with suppliers to make sure they follow recommendations by the Food and Drug Administration and the American Veterinary Medical Association on antibiotic use in cattle.

Furthermore, he said, “Our company is committed to beef that is not raised with antibiotics important to human medicine, and we’ve asked our suppliers to accelerate their progress toward establishing antibiotic alternatives.”

In-N-Out Burger, however, did not specify the timing of any move away from antibiotic use in beef.

Kari Hamerschlag, senior program manager at Friends of the Earth, said the group was encouraged by In-N-Out Burger’s response, but urged the quick-service chain to set a timeline and post plans for phasing out the routine use of antibiotics online, as well as establishing a third-party audit process. “We want to give the company a chance to be clear with the public about where they stand,” she said.

Last year, California adopted legislation limiting the use of antibiotics in livestock, but those rules don’t go into effect until Jan. 1, 2018.

McDonald’s has set a timeline for antibiotic use in chicken, although Hamerschlag said the coalition is supporting a shareholder resolution this spring that will push the burger chain to take a similar stand on beef and pork. Similar shareholder resolutions will also be put forward at annual meetings for Wendy’s and Burger King, she said.

Correction: Feb. 25, 2016 An earlier version of this story indicated incorrectly that the coalition of groups pressuring In-N-Out Burger backed shareholder resolutions proposed at McDonald’s, Wendy’s and Burger King. The coalition supports the resolutions, but did not introduce them.