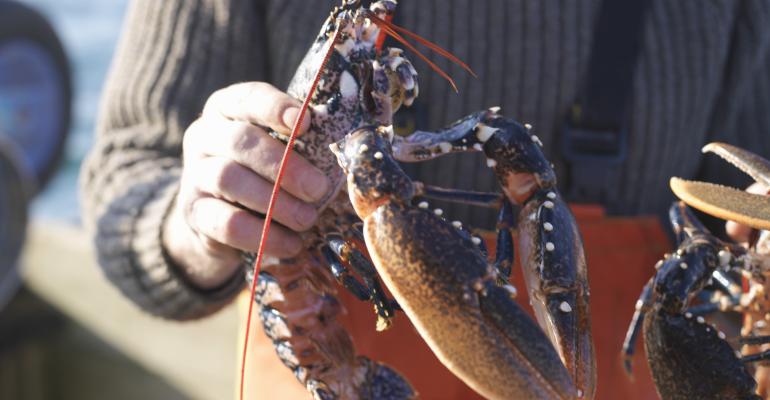 Monterey Bay Aquarium, whose Seafood Watch list of fish and shellfish to consume or avoid based on their environmental impact is widely regarded as the industry standard, on Tuesday moved American lobster from the North Atlantic onto its “red” list of species to avoid due to concerns over fishing practices that it said could harm the endangered North Atlantic right whale and other species.

Previously the crustacean had been listed as “yellow,” or a good alternative, from most fisheries.

The best choices according to Seafood Watch are listed as “green.”

The southern New England fishery had already been deemed “red” due to right whale endangerment and concerns over the possible effects of large-scale lobster fishing in the area, which it said was “likely underestimated,” but the new list now recommends avoiding American lobster from all of Canada and the Northeastern United States.

Seafood Watch said that, although the lobster stocks themselves in most of these fisheries are considered healthy, the “pots” or traps used to catch the lobsters  “pose a risk to overfished or at-risk species, including endangered North Atlantic right whales.”

“Entanglement in fishing gear is the leading cause of serious injury and death to North Atlantic right whales,” it continued. “As a result, bycatch management is rated ineffective for all pot and set gillnet fisheries operating within the North Atlantic right whale’s range because current management measures do not go far enough to mitigate entanglement risks and promote recovery of the species.”

In response to the Seafood Watch update, a spokesperson from casual-dining seafood chain Red Lobster made the following statement:

“Red Lobster is committed to sourcing responsibly and helping protect and preserve our oceans and marine life for generations to come. We share concerns about the declining North Atlantic Right Whale population, which is why we have been actively engaged in supporting scientific research and the lobster industry’s continuous improvement efforts in the Gulf of Maine. While the cause of decline in the right whale population remains unknown, these efforts to-date have proven to be effective tools in reducing risk to right whales. We remain committed to furthering these efforts and supporting meaningful change that both respects the work and livelihood of the Maine lobster fishermen while also protecting marine life.”

The National Fisheries Institute, a trade association representing the seafood industry, said the change in American lobster’s status was unwarranted.

“’Red Listing’ American lobster actually raises more questions about Monterey Bay Aquarium’s process than it does about the fishery,” a spokesperson said in a statement. “Fisheries experts who are in the know are fully aware NOAA’s overview of the fishery is that ‘U’S. wild-caught American lobster is a smart seafood choice because it is sustainably managed and responsibly harvested under U.S. regulations’ This is one of the best managed fisheries in the world with no recent evidence that right whales are dying as a result of its gear. This is a counterproductive move by MBA that frankly undermines the rest of the platinum-level work done to ensure the sustainability of the fishery.”

NOAA, or the National Oceanic and Atmospheric Administration, is the regulatory authority that governs American fisheries.

Ocean conservation organization Oceana reports that only around 330 North Atlantic right whales remain, including around 80 breeding females. It said Seafood Watch’s move was a response to lack of government safeguards.

Oceana recommended developing alternative methods for catching lobster — such as “pop-up” pots that only extend vertical lines when boats signal for them — and expanding seasonal fishing closures when whales are present.

According to Oceana, right whales were so-named by whalers because they were often found near shore, swim slowly and tend to float when killed. Hunting of the whales in the North Atlantic was banned in 1935, when their population had decreased from a possible high of 21,000 to possibly fewer than 100.