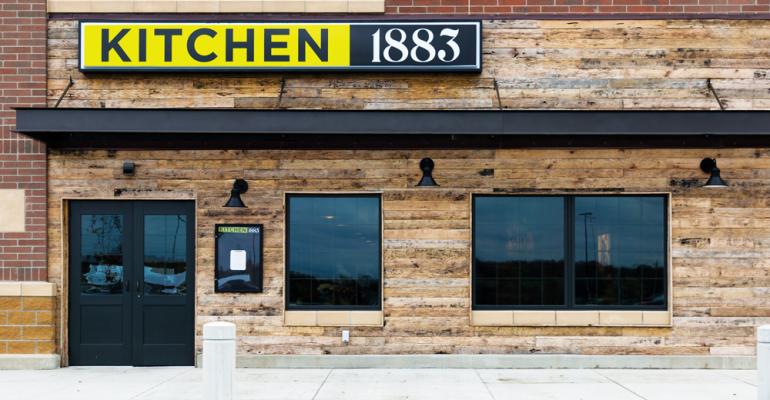 Branching out to make meals for every occasion

It was around the summer of 2015 when executives of The Kroger Co. realized they could no longer just be a grocery store.

It was the first time restaurant sales surpassed grocery sales, recalled Daniel Hammer, vice president of culinary development and new business. But he looked at the numbers as an opportunity.

“It's really about, how can you innovate food that is restaurant quality within our brick-and-mortar stores?” Hammer said. One way to introduce restaurant-quality cooking to customers is through a restaurant. Kroger entered the space with Kitchen 1883, which opened in Union, Ky., last fall. The menu centers around comfort food and an extensive bourbon lineup. The launch of the company’s hospitality division coincided with the opening.

Kroger knew its expertise was in the grocery business, so the company looked outside for help. “We went into the restaurant and into the hospitality industry to hire great talent,” said Hammer (left).

Kristal Howard, head of corporate communications and media relations at Kroger added: “We sought out the talent, the culinary experts, the chefs, the food scientists who have a better understanding of the restaurant hospitality space.”

The investment has paid off: Wait times of over an hour have been reported at Kitchen 1883.

Customers come before or after hitting the grocery store, or independently of a shopping trip for a meal or happy-hour drinks, Hammer said.

In April, Kroger said it would open a second location of Kitchen 1883 in Anderson Township, a neighborhood in greater Cincinnati. Unlike the original restaurant, the space will be separate from the grocery store, but within the same parking lot. This will give Hammer data on how customers respond to Kitchen 1883 as a standalone operation.

Many of the dishes served at Kitchen 1883 are tested and created at Kroger’s Culinary Innovation Center, a sort of R&D lab for menu items, as well as products found in stores.

The space includes a commercial kitchen with multiple cooking stations and the technology to enable video streaming of educational sessions to Kroger associates across the country.

Beyond brick and mortar

What’s for dinner? With the Kitchen 1883 restaurant, Prep+Pared Meal Kits, and extensive in-store grab-and-go and hot food options, Kroger offers meals to all customers, no matter how much time they have on their hands.

Hiring for hospitality Kroger knew it needed experts in the restaurant industry if it wanted to succeed, so the company developed its own hospitality division.

What’s next Kroger plans to incorporate a food hall in a new location in Downtown Cincinnati, in 2019.