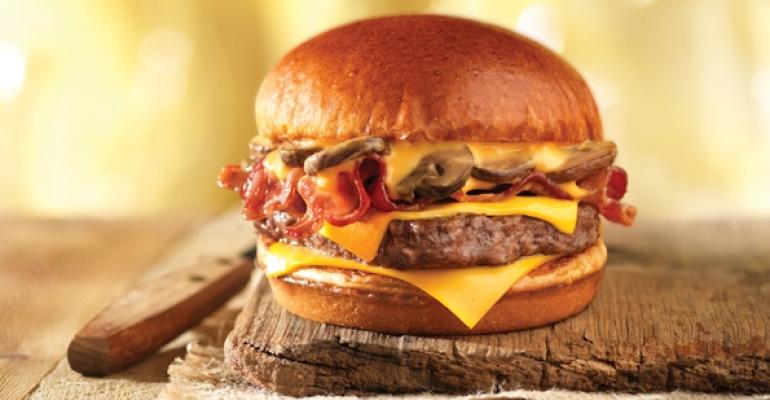 is reprising its Bacon Portabella Melt but is serving it on a new bun.

The Bacon Portabella Melt on Brioche is a quarter-pound beef patty topped with sautéed portobello mushrooms, Cheddar cheese sauce, applewood-smoked bacon and two slices of American cheese, served on a brioche bun and toasted to order. It is priced at a recommended $4.79 and will be available from Nov. 11 until late December.

The new bun replaces the 6,500-unit burger chain’s pretzel bun, which was introduced as a limited-time offer earlier this year and will be discontinued as supplies end, the Dublin, Ohio-based company said.

Burger King is adding the Big King sandwich, previously a limited-time offer, to its permanent menu, for a suggested price of $3.69.

The sandwich is two beef patties topped with proprietary King Sauce, lettuce, American cheese, pickles and white onions, served on a sesame seed bun. Unlike earlier iterations of the Big King, the new item also has a middle bun, similar to McDonald’s Big Mac, as noted in earlier reports.

“Burritos have been reframed by fast-casual competitors, who have increased guest expectations around size, flavor and variety. With Epic Burritos, we are satisfying those expectations with the same freshness and value proposition that defines the Del Taco brand, but with the convenience of a drive thru and at a lower price point,” chef brand officer John Cappasola said in a press release.

The sandwiches are available through November, but the new sauce, which can be added to any other sub, including breakfast sandwiches, will be available at least through the end of the second quarter of next year.

The Finest Smoke & Pepper Signature burger is made with black-peppered bacon, extra sharp Cheddar and a barbecue sauce developed by Tourondel. The burger is flavored with alderwood smoked sea salt and served on a buttered ciabatta bun. It is available for an unspecified limited time, with unlimited Bottomless Steak Fries, for $13.49.

has introduced two new hot beverages and two doughnuts for the holiday season.

• Red Velvet Latte: The flavors of red velvet cake and cream cheese frosting, topped with a red drizzle. The coffee is priced at a suggested $2.29 for a small, as are the chain’s other seasonal lattes, Peppermint Mocha and White Chocolate.

• Salted Caramel Hot Chocolate: Flavored with salted caramel and priced at $1.79 for a small

The Coffee Bean & Tea Leaf is adding a line of toffee- and nut-flavored drinks, available through Dec. 29.

Starbucks has added a new Gingerbread Latte for the holiday season. The beverage is made with espresso, steamed milk and gingerbread-flavored syrup, topped with spice-infused whipped cream and a molasses drizzle. Prices vary by location.

is the latest quick-service chain to upgrade its French fries. It has also introduced four spicy items at its 3,500 locations.

New skin-on Natural Cut Fries are made with whole russet potatoes, and replace the chain’s previous fries. Tots are still available. The Oklahoma City, Okla.-based franchisor recommends that its franchisees charge an extra 10 cents for the new fries.

The sandwiches are available at the Milwaukee-based chain’s 135 locations through the end of the year.

Update: Nov. 7, 2013  The latest version of this story includes pricing for Sonic's new menu items and an end-date for its limited-time offer.