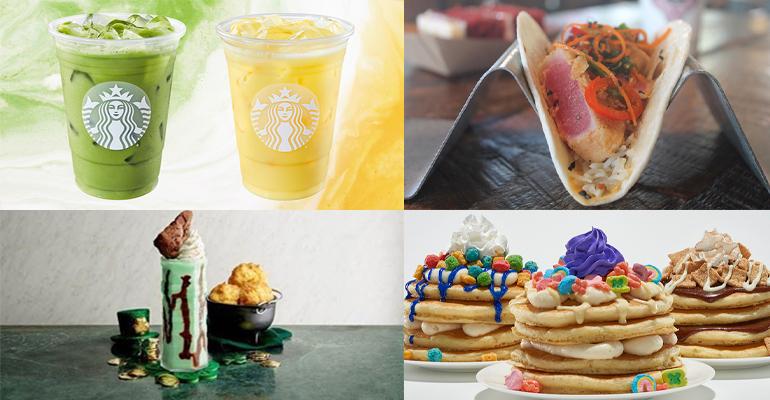 Johnny Rockets and Red Lobster are celebrating St. Patrick’s Day with Irish-themed milkshakes. IHOP has new milkshakes, too, but they’re part of a playful cereal promotion.

TooJay’s Deli is celebrating March 17, too, with a whole menu of Irish specialties, while Hard Rock Cafe is celebrating International Women’s Day, March 8, with a celebratory lineup.

Buffalo Wild Wings is highlighting its new smoked brisket with sandwiches, tacos and loaded tots, and California Tortilla is adding a new hot sauce to its “Wall of Flame,” and promoting it with a limited-time burrito.

Pizza has a new hot sauce, too — a Nashville style glaze for its wings that it says is its hottest sauce ever.

Cinnabon and Starbucks have introduced new iced beverages, Black Seed Bagels has launched its latest collab, Baskin-Robbins has a mango flavor of the month, Zaxby’s has brought back fried pickles for the first time since 2016 and Velvet Taco’s weekly taco feature is made with tuna.