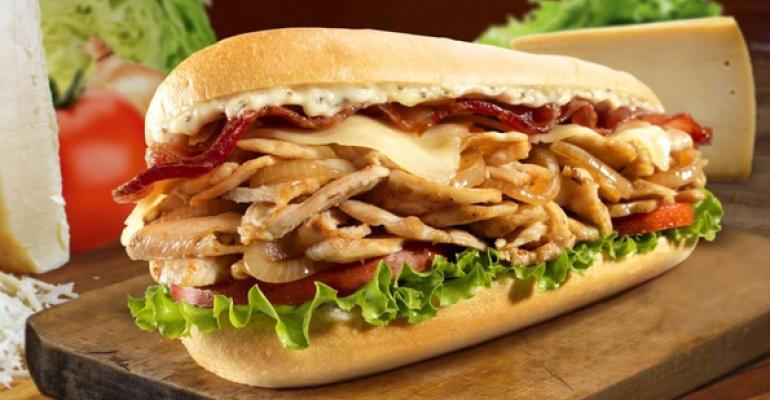 has introduced a new McCafé White Chocolate Mocha drink systemwide, available through January 2014. The beverage is made with Rainforest Alliance Certified espresso, white chocolate flavor and steamed milk, topped with whipped cream. The suggested price is $2.39 for 12 ounces, $2.89 for 16 ounces and $3.39 for 20 ounces.

Taco Bell has teamed up with Cinnabon to introduce Cinnabon Delights at its 6,500 restaurants nationwide. The bite-sized pastries are filled with Cinnabon frosting and cinnamon sugar, and are served warm all day. Four pieces are priced at around $1.49.

Panda Express has added Sriracha Shrimp, made with trendy Sriracha sauce, as a limited-time offer on its fall menu. The dish features large, crispy shrimp, string beans and red bell peppers tossed in Sriracha sauce. The premium item is available for a $1 upcharge to the menu’s standard price at its more than 1,600 locations.

McAlister’s Deli has rolled out a new line of large Big Bold Sandwiches at its 320 locations.

• The King Club: Made with double the meat of the McAlister’s Club, the sandwich has half a pound of smoked turkey and Black Forest ham, as well as applewood smoked bacon, sharp Cheddar cheese, Swiss cheese, lettuce, tomatoes, honey mustard and light mayonnaise on ciabatta bread, priced at $8.99

• The Big Nasty: Half a pound of Black Angus roast beef served open-faced on a toasted baguette with gravy and Cheddar Jack cheese, priced at $8.99.

California Tortilla is adding a frozen-yogurt line called Yo-Tort to the permanent menu at its restaurant in Lorton, Va. The yogurt is made with hormone-free Grade A milk and yogurt.

Flavors include dulce de leche, cookies and cream, Georgia peach, and cappuccino, which will be rotated frequently with standard flavors such as nonfat tart, milk chocolate and vanilla, as well as mango sorbet. Toppings such as cereal, candy and fruit also are available.

California Tortilla president Bob Phillips, who was a franchisee of the Everything Yogurt chain in the 1980s, said he thought the addition “could be a great added profit center for our franchisees.”

The yogurt is offered in the self-serve format popular at many frozen yogurt chains for 44 cents per ounce.

have added an Asiago Chicken Caesar Club to their 425 domestic locations.

The sandwich is made with chicken breast, lettuce, tomatoes, grilled onions, Asiago cheese, creamy Caesar dressing and hickory-smoked bacon, served on a toasted roll, starting at $5.29. The limited-time offer is available through Jan. 5, 2014.

Lazy Dog Restaurant & Bar, a 12-unit chain based in Huntington Beach, Calif., is adding a line of new Asian-inspired items to its permanent menu.

• Caramel Beef & Broccolini: Beef, broccolini and carrots stir-fried in a spiced sweet soy and sesame sauce, served with a choice of rice, priced at $14.95

• Tofu & Vegetable Stir Fry: Tofu stir-fried with vegetables in sweet and spicy sauce, served with brown rice, and priced at $9.25

The chain is also reprising its Hawaiian Sticky Ribs & Umami Fries, baby-back ribs that are flash-fried and tossed with Hawaiian barbecue sauce, served with Asian slaw and French fries drizzled with “umami” sauce. The dish is priced at $14.95.

has introduced a seasonal shellfish menu called “Shell of a Winter,” available through Jan. 27 at its 136 locations. The menu includes:

• Lobster & Shrimp Pot Pie: Lobster meat and shrimp in a biscuit crust, priced at around $17.49

• Crab Stuffed Lobster: A whole lobster stuffed with crabmeat and served with an Old Bay-spiked cream sauce, priced at around $25.49

• Lobster Spaghetti: Fettuccine topped with lobster meat in cream sauce, priced at around $16.49

• Oysters Rockefeller: Oysters baked with bacon, spinach and breadcrumbs and served in the shell, priced at around $11.49

• Lobster Daddy Feast: Snow crab and a whole lobster, served in a bucket, priced at around $29.99.