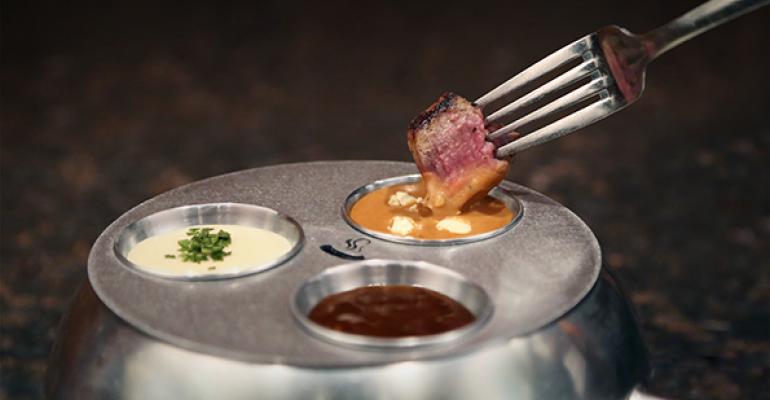 Fondue concept The Melting Pot is experimenting with entrées prepared in the kitchen in a move that company officials hope will convince customers to visit more frequently.

As fourth choice, customers can also choose any three proteins, which is the most popular option, according to Tampa, Fla.-based The Melting Pot Restaurants Inc.’s president Mike Lester.

All of the entrées are served with three dipping sauces: Gorgonzola Marsala, goat cheese fondue and Cabernet demiglace. Each is priced at $19.95 with a side.

Testing the Fon-Done items was part of the chain’s long-term strategy to stay on top of changing customer demands.

The new line is currently only available at The Melting Pot’s unit in St. Petersburg, Fla. — one of the chain’s three company-owned locations — where an entire hot cooking line has been added to the kitchen, including a grill, stovetop, fryer and ventilation hood. Lester said the test would expand to three more locations this year.

The test is part of an evolution that started in January 2013, when the menu was changed from a focus on sharing, in which fondue options were priced for couples or parties of four, to one that allowed each customer to pick and choose. The new menu also made more obvious the fact that customers weren’t required to order the full four-course menu of a cheese fondue, a salad, an entrée fondue and a chocolate fondue.

The entrée fondue is a signature feature of The Melting Pot. It consists of several raw proteins that customers cook in a choice of four tableside pots — vegetable broth, mojo broth, coq au vin broth or canola oil.

Fon-Done is intended to replace the main fondue course. Since it is prepared in the kitchen, it takes less time to eat, giving it added appeal to those who want a shorter dining experience, which Lester said many customers had requested. Adding variety and reducing perceived price and time commitments would help the 40-year-old chain maintain and broaden its appeal, he said.

Since 2013, the average number of annual visits per customer has increased from 1.8 times to 2.3 times, Lester said.

Feedback from customers indicated that they wanted to use The Melting Pot more often, he said, but sometimes didn’t have the time or couldn’t spend the money required for the experience.

The Fon-Done entrées were introduced three weeks ago, and so far customers have said they see it as a good value, Lester said.

Although the chain has not decided whether to offer the entrées systemwide, customer feedback has been positive, and several franchisees have contacted The Melting Pot about being a test location.

The Melting Pot is a subsidiary of Tampa, Fla.-based Front Burner Brands.