Rich in umami, and with a premium reputation, mushrooms can add perceived value and meaty flavor to hamburgers.

Introduced at the beginning of 2017 as a permanent menu item in its 170 restaurants, this burger, priced at $4.75, is a beef patty topped with garlic sautéed portobello mushrooms, melted white American cheese, roasted garlic aïoli, grilled onions, lettuce, tomato and pickles on a toasted sesame seed bun.

The summer limited-time offer of this approximately 90-unit chain was a beef patty topped with grilled portobello mushrooms and Swiss cheese on a seeded bun, priced around $5.99.

The 45-unit casual-dining chain introduced this burger for the summer. The sandwich, priced at $11.95, featured a beef patty topped with herbed portobello mushrooms, chipotle Gouda cheese and jalapeño garnish.

For the holidays, this casual-dining burger specialist featured a Certified Angus beef patty topped with Swiss cheese, grilled mushrooms, caramelized onions and mayonnaise on a brioche bun at its roughly 200 U.S. locations. The burger was priced between $6.99 and $8.49.

At the beginning of the year, this quick-service chain of about 800 units introduced a burger with two beef patties topped with mushrooms, Swiss cheese and creamy au jus sauce as a limited-time offer. Prices varied by market.

Introduced in February for an unspecified limited time at its nearly 5,800 domestic locations, this burger, priced at around $4.99, is a beef patty topped with portobello mushrooms, melted Asiago cheese, applewood smoked bacon and fried onions.

This burger has cooked, finely diced mushrooms folded into the patty, reducing the beef content by about 25 percent and resulting in a more environmentally friendly burger at the chain’s 3,500 locations. Starting at $1.99 and 340 calories, the Classic Sonic Signature Slinger has lettuce, tomato, diced onions, crinkle-cut dill chips, mayonnaise and melted American cheese on a brioche bun. The Bacon Melt Sonic Signature Slinger has bacon, melted cheese and mayonnaise on a brioche bun.

The smoky-sweet and sometimes spicy flavors of barbecue sauce bring an air of indulgence to burgers, augmented by the fact that barbecue burgers are often topped with fried onion rings.

The casual-dining chain with more than 560 locations introduced this sandwich as a limited-time offer last January. It’s topped with the chain’s Smoky Campfire Sauce and bourbon-infused Whiskey River BBQ sauce, as well as melted pepper Jack cheese, pickles, red onions and lettuce on a sesame seed bun, priced at $8.99.

The fast-casual chain introduced this sandwich to its roughly 70 U.S. locations as a limited-time offer last February. (The chain has since grown to more than 100 units.) The sandwich was an Angus beef cheeseburger topped with fried ShackMeister Ale-marinated shallots and barbecue sauce, starting at $6.39.

The quick-service concepts introduced this limited-time offer at their roughly 3,000 locations at the end of last April. The burger patty was topped with boneless baby back ribs dipped in Cattleman’s Original BBQ Sauce that in turn was topped with fried onion strings and pickles, served on a brioche bun and starting at $5.59.

The burger of the month for July at this 18-unit casual-dining chain was a half-pound beef patty topped with pulled barbecue chicken, spicy coleslaw, pepper Jack cheese and fried pickles on a toasted brioche bun, priced at $11.99, with shoestring fries.

Part of the revamp of this 320-unit quick-service hot dog specialist’s burger menu, this item starts at $2.69 and is a grilled beef patty topped with bacon, American cheese, grilled onion and barbecue sauce on a toasted bun with garlic-butter spread.

The 178-unit casual-dining chain introduced this limited-time offer in celebration of the Sept. 20, 2017, launch of the 20th Century Fox film “Kingsman: The Golden Circle.” A half-pound burger was basted with bourbon glaze and topped with pulled pork, melted cheddar cheese, garlic aïoli, lettuce and tomato, served on a sesame seed bun with a side of onion rings, and priced between $15.95 and $18.95.

Some restaurants give burgers more of a steakhouse feel by using premium beef in the mix or flavoring them with ingredients such as steak sauce or blue cheese.

At the beginning of last year, the 22-unit fast-casual chain offered this burger for a limited time, made of a beef patty topped with blue cheese crumbles, sautéed spinach, fried parsnip chips and housemade “steakhouse ketchup,” priced between $6.99 and $7.49.

The burger of the month last April was an 8-ounce patty topped with Blue Moon-braised onions, grilled mushrooms, blue cheese crumbles and garlic aïoli on a toasted onion roll, priced at $11.99.

This quick-service burger used 100-percent rib-eye as a limited-time offer last October. Priced between $5.50 and $6.50, depending on the market, it could be topped either with red onion, tomato, provolone cheese, mayonnaise and spring mix or tomato, grilled onion, mayonnaise, Havarti cheese and red wine glaze. Both options were served on a potato bun.

The nationwide drive toward spicier flavors has not skipped hamburgers, which are now regularly offered with spicy cheeses; hot sauces; and raw, sautéed or fried chiles.

Introduced at the casual-dining chain’s 47 locations last June and available through the end of last year, this sandwich featured a beef or bison patty topped with four different melted cheeses, Sriracha aïoli and sweet-and-spicy pickles. It was priced at $15 for beef and $18 for bison at most locations.

For the first time, McDonald’s tinkered with the Special Sauce on its Big Mac at its 17,000 U.S. locations this summer. The new build, available with beef or chicken, was topped with baby spinach and kale, tomato, white cheddar cheese, fried onions and Big Mac sauce spiked with Sriracha on a choice of a toasted roll or sesame seed bun, priced at around $5. 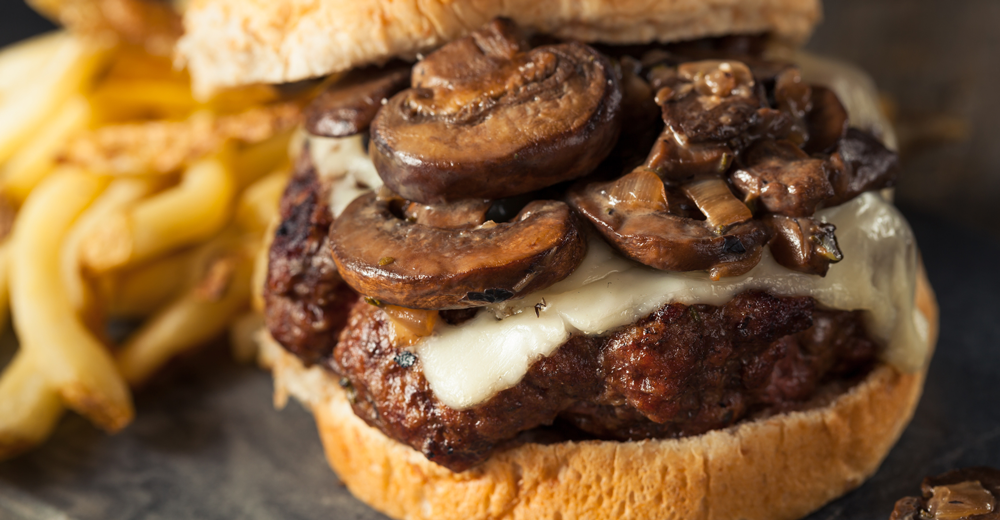 Next Up
MenuMasters: Plant-based lamb and ‘everything’ knishes
Start Slideshow ›