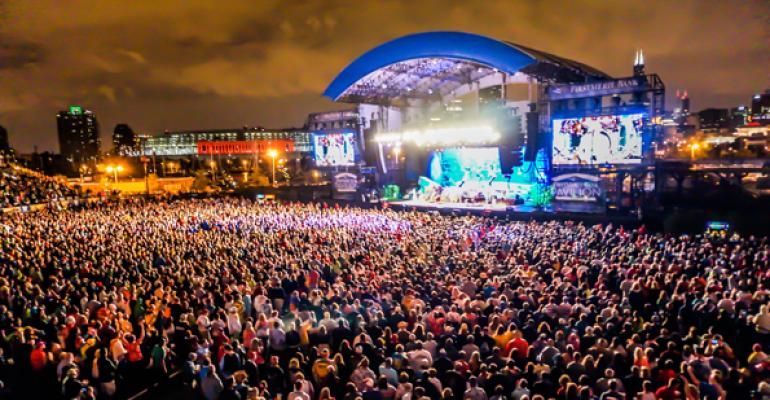 Live Nation Entertainment, which operates 38 amphitheaters across North America, is revamping its foodservice program with commitments to use local produce and meat from humanely raised animals.

The live entertainment company has teamed with the Humane Society of the United States and has committed to serving hamburgers, hot dogs, Italian sausages and chicken tenders made with meat that carries Certified Humane, Global Animal Partnership or Animal Welfare Approved certification.

The company is also is working with James Beard Foundation Award–winning celebrity chef Hugh Acheson to develop its first vegetarian options for the menu.

“We’re essentially reducing our commission so we don’t increase the cost to the fans,” Yost said.

Yost said the definition of “local” varies from venue to venue. “For example, our Boston facilities will be serviced by farms that range from 20 miles away to 60 miles away because we need that many farms to provide the volumes we need,” he said. “Our concessionaires are using their supply chain as well as their corporate supply chain management teams [to source the product].”

Creating change on a large scale

Live Nation serves more than 800,000 meals annually, according to a release from the company.

Acheson, who owns two restaurants in Athens, Ga. — Five and Ten, and The National — and Empire State South in Atlanta, and was a contestant on Bravo TV’s Top Chef Masters, as well as a judge on Top Chef, said he was glad to work with a large corporation that was trying to change the way it sourced food.

“When I find corporations that are looking to effect change, I’m eager to help them,” he said. “I think it’s a big step forward. … The system only changes when really big players put their name in the hat and say ‘we want to change that, too.’”

Acheson said he was working to launch Live Nation’s first vegetarian item by the end of August.

He added that he’s also working on introducing more healthful items, like rice bowls with complex carbohydrates, lots of vegetables and a little protein. “I’m trying to advance the idea of how to get that kind of food to the person who might be in line for the burger,” Acheson said.

Acknowledging that sourcing local produce for such large venues — the amphitheaters on average seat 17,000 people — is a complex task, according to Acheson. “People ask how you change stadium food, and you do it by actually starting to change it,” he said. “Nothing gets done if you don’t start.”

Other stadiums have made moves to offer more local products as well. For the 2012 Super Bowl at Lucas Oil Stadium in Indianapolis, Centerplate worked with Farm Aide to use local, organic ingredients for pork, beef and vegetarian chili. Centerplate also has introduced a line of more healthful items called Snacksmart.

Last summer, a number of baseball stadiums started offering items made from local products, including lamb burgers and sausages at AT&T Park in San Francisco, and sausages and grass-fed beef at Safeco Field in Seattle.