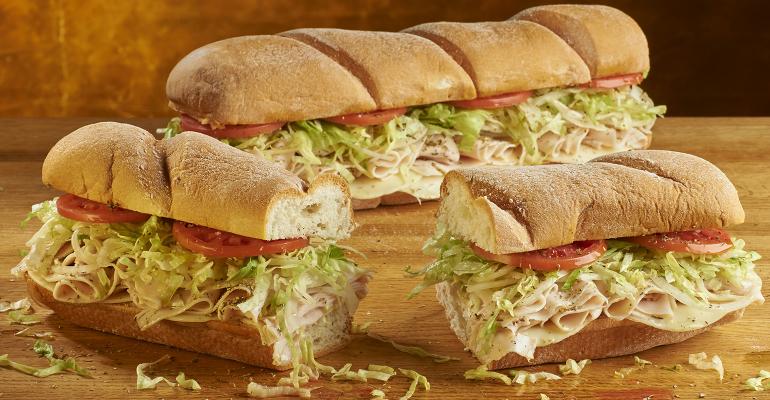 Jersey Mike’s Subs will introduce a gluten-free bun at its 1,320 locations nationwide next month.

The fast-casual sandwich chain based in Manasquan, N.J., bakes bread in-house, but it will use fully cooked, individually wrapped rolls from gluten-free specialist Udi’s, based in Boulder, Colo., for the new offering. The rolls are manufactured in Denver by Udi’s parent company Boulder Brands.

Jersey Mike’s recommended that franchisees charge an additional $1.50 for regular gluten-free subs and $3 for “giant” subs, according to chief operating officer Mike Manzo.

The bread was tested in more than 200 locations in six states over the course of two years.

“We gained trust with customers, and that’s how we built the amount of bread-per-day usage, and it went up incrementally,” Manzo said.

Jersey Mike’s worked with the Gluten Intolerance Group to develop procedures and a training video to prevent cross-contamination.

The chain previously tried another gluten-free brand that provided a dough to be proofed and baked in ovens. Although cross-contact with gluten was minimal — within the legal requirement of less than 20 parts per million of gluten — Jersey Mike’s had trouble maintaining consistency since the gluten-free product was more sensitive to temperature than its regular rolls.

To make the gluten-free subs, workers must wash their hands, change their gloves, wash the work counter and make the subs on top of a separate sheet of paper in order to reduce the risk of cross-contact with gluten.

Manzo would like to see the gluten-free buns account for 5 percent of sales, he said, but he’s more concerned about introducing the chain’s subs to customers “that would love to have a submarine sandwich again between two pieces of bread. If we sell that to only two people a day, then it’s a victory.”

Jersey Mike’s was the second fastest-growing large restaurant chain in 2016, according to Nation’s Restaurant News’ Top 100 report, with annual sales of $825 million, a 22-percent increase from the previous year.