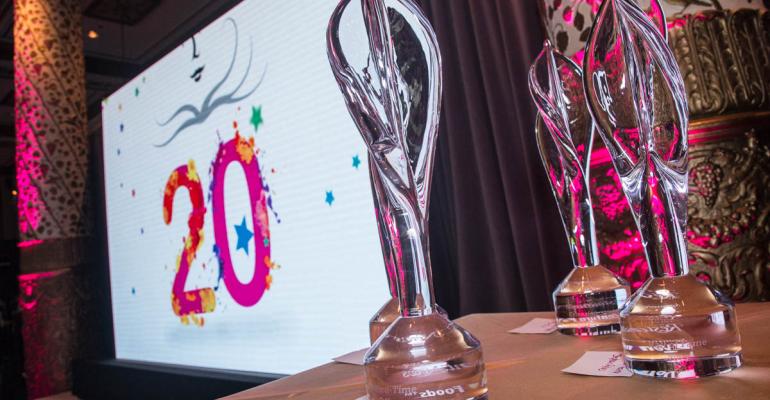 “I had duck tongue and pancakes not two feet from each other. How amazing is that?” said Billy Dec as he welcomed guests to the 20th annual MenuMasters Awards, presented by Nation’s Restaurant News and sponsored by Ventura Foods.

Dec, founder and CEO of Chicago-based hospitality company Rockit Ranch Productions, was master of ceremonies for the celebration, which recognizes culinary innovation in foodservice, from quick service to fine dining.

Her station at the party was between Denny’s, which won the award for Best Menu Revamp for its buttermilk pancakes — topped with salted caramel and bananas, and paired with Veuve du Vernay, a French sparkling rosé — and that of Stephan Pyles, this year’s inductee into the MenuMasters Hall of Fame. Pyles served lobster tamale pie paired with Rodney Strong Chalk Hill Chardonnay from California’s Sonoma Coast.

“MenuMasters is something that Ventura holds so dear because it fits our company,” Ventura Foods CEO Chris Furman told the crowd at The Drake Hotel in Chicago, noting that the company focuses on developing custom products for foodservice operators.

Pyles, accepting his induction into the hall of fame, reflected on the past 20 years and the inductees who came before him — including Wolfgang Puck, Paul Prudhomme, José Andrés and Norman Van Aken. He said the honor was on par with winning a James Beard Award.

“I am incredibly honored to receive this award tonight,” he said, noting that his predecessors “absolutely changed the essence of our way of cooking.”

Pyles, who is credited with spearheading the development of Southwestern Cuisine in the 1980s, thanked his staff over the years “for making me maybe better than I really am, and I’m okay with that.”

He also had high praise for NRN, citing the publication’s reporting for helping him to innovate.

In accepting her award as innovator of the year, Izard said the city where she operates helps spur innovation.

“We kind of think Chicago is the jam for restaurants,” she said, adding that she was lucky to be in a city where guests challenge them, “and we do the same to them.”

The award for Best New Menu Item went to Shake Shack, for its Chick’n Shack, the fast-casual chain’s new fried chicken sandwich, which was paired with Blue Moon beer.

“I think in the end we just made what we wanted to eat,” said Gillian Ortiz, Shake Shack’s manager of culinary development and R&D.

Panera Bread was honored in the Healthful Innovation category for its 100-percent clean menu, which has no artificial ingredients. The bakery-café chain served a watermelon and feta salad over grains, including freekeh and daikon seeds, paired with two of its own beverages, prickly pear hibiscus fresca and blood orange lemonade.

In accepting the award, John Taylor, Panera’s director of concept development, said that for a restaurant to succeed, it has to be relevant. Offering an additive-free menu is one way that Panera strives to do that.

“We call that food as it should be,” he said, adding that he and his team sought to make a positive impact on the entire food system.

By Chloe, the New York-based vegan chain, was named Trendsetter of the Year. The fast-casual concept served its guacamole burger, paired with a Lagunitas IPA.

“We think we are on the cutting edge of what the next generation of restaurants will be,” senior vice president of development David Selinger told the crowd, adding that although the chain has just six locations, he expects it to be in every city in the country.

In accepting the award for Best Menu Revamp, Sharon Lykins, Denny’s senior director of product innovation, said the refurbished menu “was truly a definition of collaboration,” from CEO John Miller to the unit-level team members who prepared the food every day

Yuji Iwasa, P.F. Chang’s director of culinary innovation, praised his team, as well as the “awesome people” of Chicago who welcomed him and his team to the city.

“Inspiration is what drives innovation,” he said

Brigham Young University won the award for Best Line Extension for its Aloha Plate, a traditional Hawaiian plate lunch comprised of two scoops of rice, one scoop of macaroni salad and a choice of protein — at the party, that protein was shoyu chicken — paired with Borgo Conventi Pinot Grigio from Friuli-Venezia Giulia in Italy. The dish is priced at $5.95, and the university has sold more than $900,000 of the meals since the offer began last year.

She thanked Ventura senior vice president Jim Goggin for his creativity in developing the MenuMasters program and presented him with a still-wet painting of the night’s festivities that artist Lothar Speer made during the celebration.