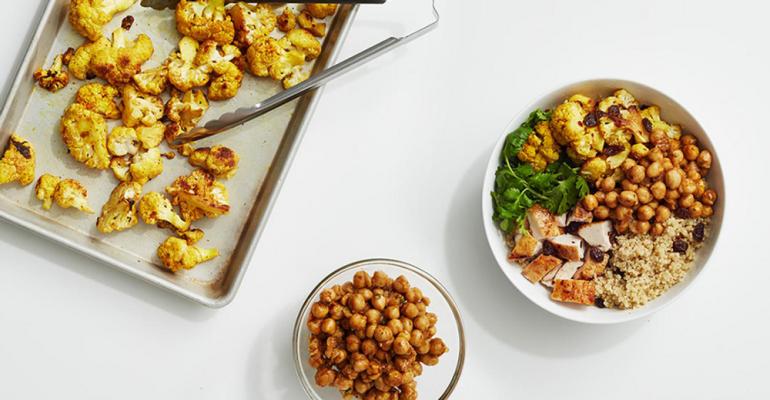 sweetgreen
Sweetgreen's Curry Cauliflower salad was a hit in the fall.
Menu>Food Trends

After years of simmering slowly, the subcontinent’s cuisine hits the mainstream

Indian food has long played second fiddle to cuisines that are trendy in the U.S. Aficionados admire it, but the general public greets it with a shrug.

But the cuisine and techniques of India have made steady inroads into mainstream American dining, and restaurants are finding new ways to attract customers with the bold and varied flavors of the subcontinent.

Some restaurateurs have created Indian fast-casual concepts with clean-label messaging, while others are incorporating elements of the cuisine into their menus.

Sweetgreen, the 65-unit fast-casual chain based in Los Angeles, is taking the latter approach.

“Our Curry Cauliflower salad was such a hit this fall that we developed the Curry Chickpea Warm Bowl for our winter menu,” said Michael Stebner, sweetgreen’s culinary director.

“These spices make for hearty meals for lunch or dinner, and give our bodies the warm flavors they crave in the winter,” Stebner said.

India’s influence also extends to sweetgreen’s beverage menu. The chain is offering a drink made with carrot juice and turmeric called a Carrot-Turmeric Fresca.

At independent restaurants, Indian-inspired items are appearing on menus, such as the gobi pakora, or cauliflower fritters, at Olmsted in Brooklyn, N.Y.

Chef-owner Greg Baxtrom said one of the cooks, who is originally from Tennessee, previously worked at an Indian restaurant in Cleveland. The cook made an Indian-influenced barbecue sauce that became the inspiration for the sauce served with the pakora. Baxtrom revised it a bit, starting basically with a gastrique — water, sugar, glucose and white wine vinegar — spiced with curry powder, raw ginger, sliced chile and citrus leaves from the restaurant’s garden.

“We really brighten it up with tons of lemon and lime juice, herbs and chiles,” he said.

Also on the menu is duck chakna, a southern Indian stew, served with red lentil naan and pear chutney.

The dish starts with duck confit that he warms up and covers with raw cilantro, chiles, shaved red onion and radicchio.

The pear chutney is a riff on the apple chutney of Indian-American chef Floyd Cardoz, with whom Baxtrom worked in the past. And the naan, made with red lentil flour, is a crowd pleaser.

“The guests sort of get a kick out of it because it’s an open kitchen and they can see it puffing,” Baxtrom said.

He said both dishes are top sellers at the restaurant because they generate curiosity from customers.

Srijith Gopinathan, a native of the coastal Indian state of Kerala, was hesitant to add Indian flavors to his menu when he became the executive chef of Campton Place in San Francisco during the recession. But as business started to pick up, and he received his first Michelin star, he became bolder. Gopinathan started by spicing up “crowd pleaser proteins,” like lobster and shrimp, offering one such dish per tasting menu.

When no one complained, he added more. Soon he had two tasting menus, a seasonally inspired “market menu” and a “spice route menu.”

Dishes in the early years included cured mackerel with spiced yogurt, and a variation of a duck samosa that was baked instead of fried. The duck was flavored with a mix of shallot, red onion, curry leaf, cilantro, roasted cumin, roasted coriander and red chile powder, and finished with tomato and yogurt.

Within six months, Gopinathan was selling more of the spice route menu than the market menu, he told NRN last year.

But it can take much longer for some restaurateurs to build that trust with customers.

She took a fusion approach because when she opened the first Vermilion in Chicago 14 years ago, she didn’t think her customers were ready for solely Indian cuisine.

So she offers dishes like a tandoori skirt steak with a classic chimichurri and an Indian chimichurri with black cardamom, green cardamom, cloves and vinegar. Kati rolls at The Kati Roll Company are available in a traditional paratha or in a whole-wheat roti. Photo: Michael Berman

And blending the two regions isn’t really that much of a stretch, she noted. The state of Goa in southwestern India was a Portuguese colony for centuries, South America and Central America have large Indian populations, and both Spanish and Indian cuisines were heavily influenced by Muslim invaders.

“A paella in Spain is a pulao in India,” Dey said.

To further broaden the restaurant’s appeal, Dey is adding a brunch bar Friday through Sunday at her Chicago restaurant featuring frankies and dosas.

Frankies are wraps made with flaky, fried paratha, popular in Mumbai, and dosas are crepes made from lentil and rice flour and are popular in southern India. Fillings include classic potato, chorizo curry leaf, tamarind shrimp and duck vindaloo. They can be topped with assorted chutneys, such as chile mint, coconut cilantro and tamarind date.

A frankie in Mumbai is essentially a kati roll in Kolkata. The kati roll is the foundation of the menu at The Kati Roll Company, which has four units in New York City and one location in London.

The fast-casual chain is the brainchild of Kolkata native Payal Saha, who opened her first location in 2002.

“I love kati rolls. I grew up eating them, and there was nothing like it here,” Saha told NRN last year.

Originally offering traditional rolls with fillings like spiced potatoes and marinated meats, the menu has expanded to include vegetable croquettes, minced lamb with lentils and marinated tiger shrimp. Biju Thomas is experimenting with a waffle-version of dosa. Photo: Georg Beyer

The kati rolls are available in a traditional paratha or in a whole-wheat roti. Also on the beverage menu are chai and lassi, in traditional mango and not-so-traditional berry flavors, made with organic yogurt.

In Colorado, dosa is the star of the menu at Biju’s Little Curry Shop, with four locations in Denver and Boulder. But founder Biju Thomas is experimenting with a new version of dosa, made in a waffle iron.

The dosa is typically made as a thin crepe, “because they’re made of rice there’s really not much structure to it,” Thomas said. But by making them into a more substantial spiced waffle, the dosas will hold for up to 45 minutes and the traditional crispy texture is maintained, he said.

“The beauty is the ingredients are 100-percent true and authentic. Just the shape has changed,” Thomas said.

Thomas plans to introduce them at the chain’s two locations inside Whole Foods Markets.

The new dosa waffle will be available as another option for a base in the chain’s signature bowls, which are southern India-inspired curries that can top either the spiced rice dish biryani or salad. Guests can further customize their dishes with a choice of chutney.

All of his menu items, except for such meat-evident dishes as coconut curry chicken and masala beef, are vegan and free of dairy, nuts and gluten, except for flatbreads, which are available on the side.

The items must also meet Whole Foods’ specifications, meaning no artificial colors or genetically modified organisms. Even the spices are custom-sourced by Colorado Spice Company, because commodity spices are irradiated — another Whole Foods no-no. “So we custom-blend all of our spices in Colorado,” said Thomas, who developed five basic spice blends that are prepared for him in 50-pound batches.

Another fast-casual concept, Choolaah Indian BBQ, puts the tandoor — a top-loading, wood-burning oven from northern India — at the heart of its restaurant.

Choolaah Indian BBQ has one location in Cleveland, a second unit that recently opened in Fairfax, Va., and a third outlet slated to open in Pittsburgh later this year.

Founder Raji Sankar had wanted to open an Indian restaurant in 2003, but had reservations.

“We knew the timing was not right, especially where we were located [in Cleveland],” Sankar said.

But by 2012, she saw the aisles at supermarkets such as Whole Foods and Trader Joe’s stocking emerging brands of Indian products, giving her the push to open Choolaah.

The restaurant cooks chicken, lamb, salmon, vegetable croquettes and the mild cheese paneer in the tandoor. They are available as a thali, a set meal with a choice of rice, bread and a side dish, including spiced chickpeas, tandoori vegetables and two types of dal, or lentil soup.

Guests can also have their food in bowls, over greens or basmati rice, or as Tandoori Wraps, “much like a kati roll, if you will,” Sankar said. “It’s very important to us that it’s food that you can eat every day,” she said.

The tandoor helps with that, as the fat drips from meat as it cooks, while the outside is seared and the inside stays moist.

“And it’s a lot of fun to watch your food being cooked in front of your eyes,” Sankar said.

At Nix, a trendy vegetarian restaurant in New York City, chef John Fraser has two tandoors in the kitchen. And Douglas Katz has been cooking with tandoors at Fire Food & Drink in Cleveland since 2001.

Katz makes skewered pork chops, steak and whole fish in the tandoor. He even smokes and cooks his own bacon in it. His staff created a hotel pan with hooks that can be hung in the tandoor, where he smokes the bacon once the oven has started to cool down. He then brushes it with a maple-bourbon glaze and cooks it at a high temperature for his busy Sunday brunch service.

“I love cooking over an open fire,” Katz said. “We load the fire each day, and it’s like having a campfire as a centerpiece. It really is the center of our kitchen.”