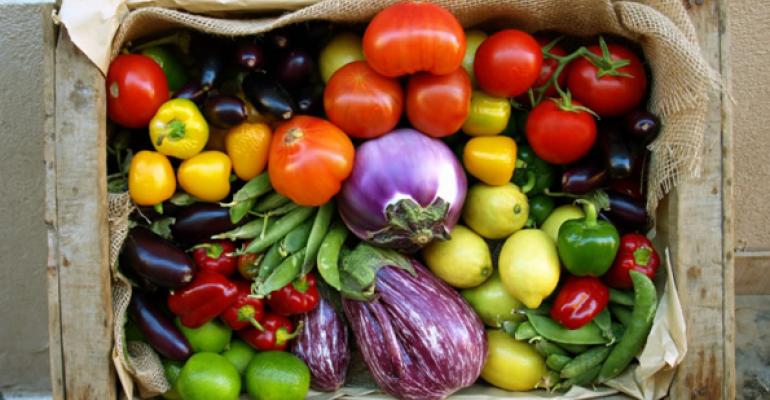 Thought leaders in the culinary arts and public health gathered in Cambridge, Mass., for the second annual Menus of Change conference this week to discuss ways improve the health of Americans, as well as the planet.


The top three issues brought into focus were:

• Climate change: Coping with the challenges climate change is presenting to the foodservice industry and conceiving of ways that restaurants and culinary educators might try to slow it down.

• Fruits and vegetables: Figuring out how to get fruits and veggies to make up half of the average plate, including how to produce and source so much of it.

The conference’s presenters tied the three topics together, presenting evidence that excessive consumption of red meat is a leading cause of heart disease and a contributor to diabetes, and that red meat — particularly beef — is a key contributor to global warming. They said foodservice operators should try to introduce other sources of protein and also replace much of that protein with vegetables and fruit, particularly since most Americans eat more protein than they need.

Walter Willett, chair of the Harvard School of Public Health’s Department of Nutrition, fired the first salvo, saying that people who increase their consumption of red meat also increased their risk of heart disease and Type II diabetes. Conversely, he said, consumption of more poultry, fish, nuts and legumes is associated with lower risk of those conditions.

Although he didn’t say how much or how little red meat people should consume, in the past Willett has advocated for eating red meat, including beef, lamb and pork, no more than twice a week.

Next, Alan Miller, a recently retired climate change specialist with the World Bank, said that 70 percent of global agricultural land is used for livestock production, including 33 percent of total arable land that is used to raise feed crops, particularly for beef.

Kari Hamerschlag, senior program manger of the environmental organization Friends of the Earth, said that clearing land for feed crops was a major factor in deforestation, which leads to less vegetation that can remove carbon dioxide from the atmosphere. Furthermore, she said, cattle, in the process of eating and digesting grass, produce massive amounts of methane, a much more potent greenhouse gas than carbon dioxide.

Miller said that the International Energy Agency predicts that the earth’s average temperature will be as much as 3 degrees Celsius higher by the end of this century, possibly by 2050, which will result in more extreme weather conditions than humans have experienced in recorded history.

Although the cycle now in place leading to global warming “is somewhat irreversible,” Miller said, presenters advocated for a severe reduction in the consumption of red meat in general and beef in particular.

In looking for other sources of protein, presenters turned to the oceans and also to plants. Christopher Gardner, professor of medicine at the Stanford Prevention Research Center at Stanford University, pointed out that most people can get by with just 50 grams of protein per day.

Michael Tlusty, director of ocean sustainability science at the New England Aquarium, pointed out that the United States Food and Drug Administration has identified 1,825 species of seafood, but Americans mostly eat salmon, tuna and shrimp. He said fish production in general, including aquaculture, has a much lower carbon footprint than mammal or poultry production, and that we can consume more seafood sustainably by creating more through aquaculture, wasting less and using information resources such as seafoodsolutions.org to source seafood that is fished or raised sustainably.

Greg Drescher, the CIA’s vice president for strategic initiatives and industry leadership, pointed out that chefs also can use their skills to add to the appeal of vegetable protein, and also rethink the positioning of animal protein on the plate.

Chef-restaurateur Jody Adams, who operates Rialto, the fine-dining restaurant at the Charles Hotel, where the conference was held, said that although she can’t deny the demands of customers who want a big steak or half a duck, she has balanced out the rest of the menu with smaller portion sizes. For example, she has reduced her scallop serving to between 4 and 5 ounces, and filled the plate with “really interesting flavors,” including citrus, herbs, spices and nuts, to satisfy customers.

Martin Breslin of Harvard University dining services advocated blending ground beef with 30-percent mushrooms for use in shepherds pie, tacos and similar dishes, as well as meat loaf, which he said his customers enjoy.

Adam Busby, the CIA’s director of special culinary projects, demonstrated dishes that use minimal protein on top of highly seasoned vegetables for a satisfying meal. For example, he made a salad of shredded carrots dressed with tahini, garlic, lemon juice and olive oil, added Italian parsley, radishes, Aleppo pepper, dill and pistachios, and topped it with toasted chick peas toasted with olive oil, cumin and salt. He topped that off with a few rings of batter-fried calamari.

As the conversation turned to produce, the mood was more upbeat. Jeffrey O’Hara, an agricultural economist at the Union of Concerned Scientists, argued that there was dissonance between farm policy, which subsidizes soybeans and corn but not “specialty produce,” including other fruits and vegetables. However, the most recent farm bill, passed earlier this year, made allowances for farmers of those commodity crops to grow other produce without facing penalties. Additionally, a risk-management insurance program has been implemented for farmers supplying local markets.

Loans also have been made available for supermarkets opening in low-income neighborhoods, and $100 million in incentives are available for families using food stamps to get double those stamps’ value if they buy produce from farmers markets.

Foodservice operators also pointed to progress at their venues. Jayne Buckley, vice president for strategic business implementation at Compass Group North America, said she was being pushed by clients such as Google and Microsoft, who are demanding that their plates be half covered with fruits and vegetables, as recommended by the U.S. Department of Agriculture.

“We didn’t try to change behavior to [buying] salad through the drive-thru,” he said. Instead, he gave them options that dovetailed well with their demands.

The Menus of Change conference is presented jointly by the Culinary Institute of America and the Harvard School of Public Health’s nutrition department.